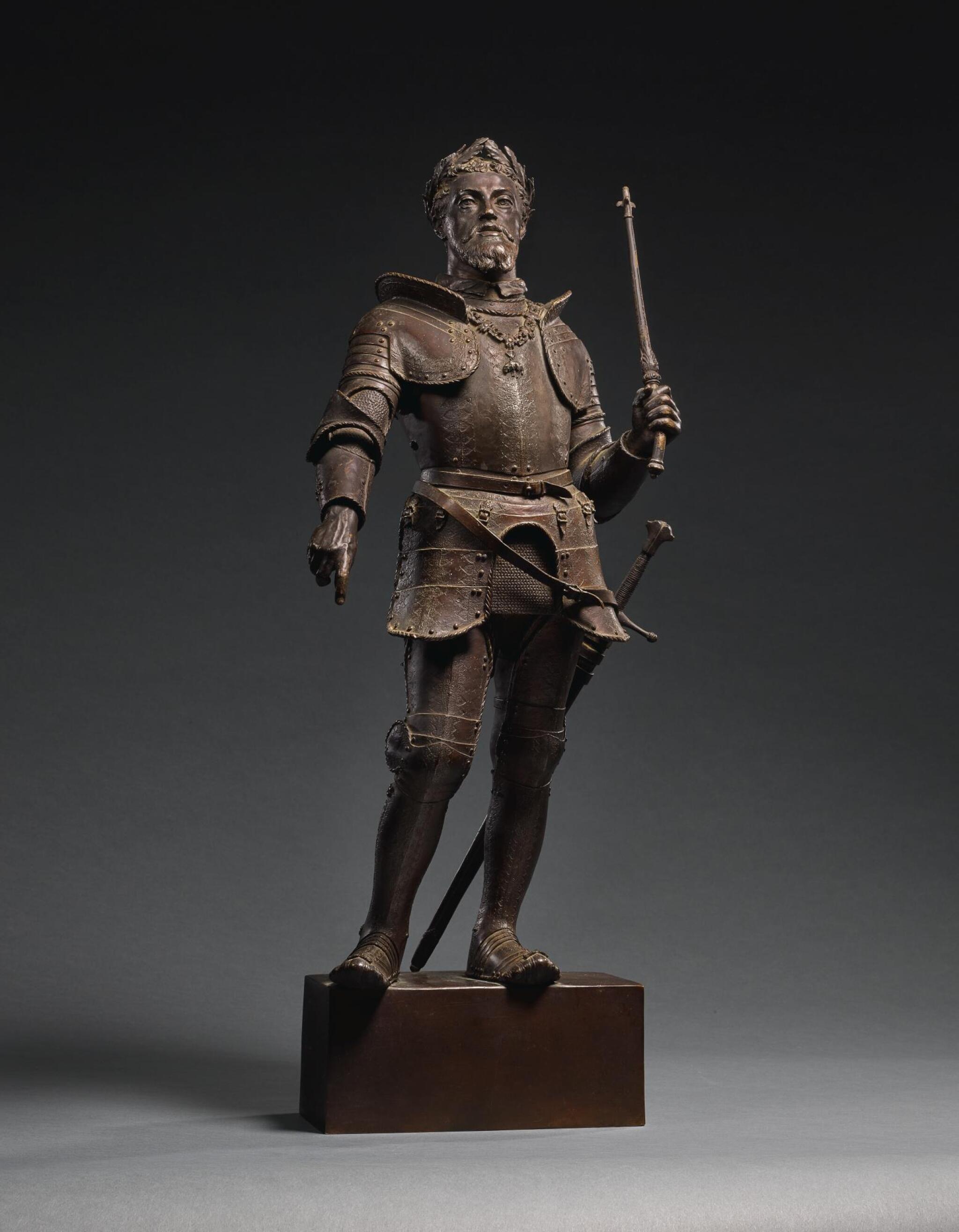 Charles V is unique in Gemito's oeuvre. It is his only modern historical subject and is the most ambitious public project he ever attempted. It is his only completed royal commission, expressing official recognition of his talent, and is a turning point in his career. In 1881 King Umberto I commissioned Gemito to provide one of eight monumental marble statues of historical characters for the façade of the Palazzo Reale in Naples. The remaining statues were commissioned from other Neapolitan sculptors including Achille d'Orsi.

Some critical assessments of Charles V, based exclusively on the exhilaration of the finished marble statue, concentrate on Gemito's deep disappointment with the final work, which is said to have precipitated his subsequent mental collapse. This is to neglect, however, the artist's intense search for expression and his clear satisfaction with his model, apparent only from an understanding of his surviving wax model (Galleria d'Arte Moderna, Milan) or the few bronze casts taken from it.

Until Charles V Gemito's work had been conceived and executed on a human scale. His subjects were derived from Neapolitan street life and from antiquity. Executed with minute intricacy and wonderful technical skill, the majority of his pieces were made in bronze and cast in his own foundry. Charles V is something new. His inexperience of historical subjects led him to make a special trip to Paris in June 1886 to seek advice and assistance from the painter Charles Meissonier. During passionate discussions, Gemito and Meissonier analysed Charles V's character and how to express this in sculpture.

Gemito's ideas were idiosyncratic: Meissonier urged him to use a form of historical romanticism on the lines of François Rude's Marechal Ney and Carlo Marochetti's Emanuele Filiberto. Charles V's dominant character was expressed through a subtle treatment of his strong physiognomy and in a carefully contrived stance and pose. The disastrous incident of the flawed marble block provided for Gemito in Naples caused a fundamental alteration in the position of the right arm in the final work, which the sculptor believed radically changed his intentions, and was the primary cause of his dejection.

The depiction of the armour was all important. Gemito took great pains to base his work on historical models and studied many examples while in Paris (numerous armour studies by Gemito are in the Minozzi collection). Meissonier's son recorded Gemito's obsession with some antique armour which he would carry around in a sack wherever he went. One of his sources appears to be taken partly from Titian's equestrian portrait of Charles V in the Prado, in which the Emperor wears a gilt German suit known as the Mühlberg armour. However, his inspiration was eclectic and the final form of the armour combines his researches (probably in the Musée de l'Armée) under Meissonier's direction, with the decorative detail of the Mühlberg armour and elements of Italian design. The Emperor's armour allowed him to express his special skill in creating detail. The treatment of the decoration and the mail are exceptional, but this essential part of the model's supreme quality was completely lost in the transfer to marble and can only be properly appreciated in the wax or bronze, as in the present statuette.

Gemito returned full of optimism to Naples with his model in the autumn of 1886. 'Il mio bozzetto va molto bene il maestro ne è molto contento e non manca di altro che di qualche finezza necessaria ed altre piccole coze di armature... ' But, back home things started to go wrong. There were complications and pressures with the commission organizers, while Gemito struggled in vain to resolve the inadequacy of the marble block. These may have contributed to his mental breakdown and to the following two decades of isolation, but critics have surely oversimplified the causes of his collapse.

﻿Of the different versions of Charles V, the marble is still in­ situ, a full-size plaster and a bronze taken from it in 1956 are in the Accademia in Naples. There is a terracotta bust in the Galleria Nazionale d'Arte Moderna, Rome and various bronze busts (an example being in the Ashmolean Museum, Oxford). It appears that Gemito executed only a handful of bronze casts of his wax model now in Milan; one is in the Minozzi collection, Naples, and another was formerly in the Consolazio collection in Florence, which sources attest to having been cesellata da Gemito (chiseled by Gemito). The Consolazio bronze has been identified as the cast sold in these rooms on 22 November 1994, lot 167. The present bronze is a rare third cast and an important rediscovery. The quality of the casting is exceptional and very close to the Consolazio 1994 cast, suggesting that like that cast the present bronze was probably finished by the master himself.