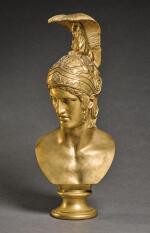 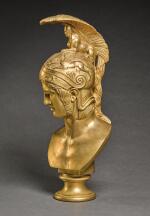 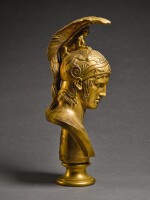 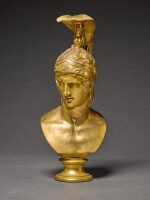 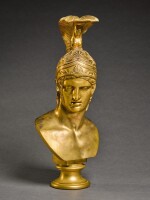 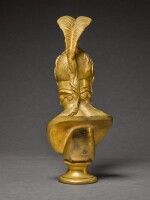 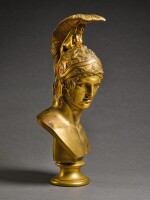 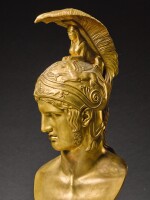 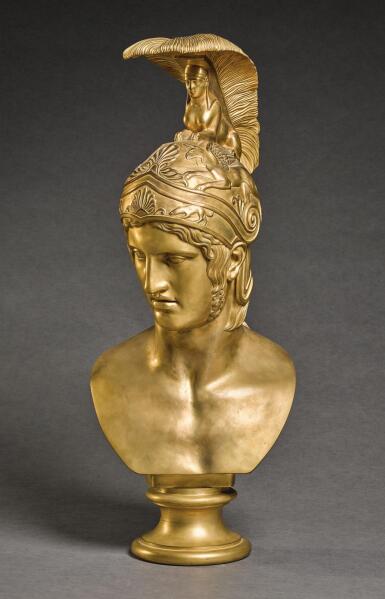 Overall the condition of the bronze is very good, with minor dirt and wear to the surface consistent with age. There is general wear to the gilding consistent with age, in particular around the shoulders and at the high points of the decoration to the helmet. There are two slightly prominent patches of wears to the chin at the proper right side, where there is also an original plug. There are various small original plugs to the surface, including at the visor helmet on the proper left side. There are some patches of greening to the back of the bust around the inscriptions, and a few very minor areas of greening to the back of the helmet and some of the crevices.

This magnificent gilt bronze bust of Achilles, after an antique marble in the Hermitage, was cast by the famous Roman foundry of Francesco and Luigi Righetti in 1821. Its inscription indicates that it was probably cast in collaboration with Antonio Canova’s studio, from a model by one of the great neoclassical sculptor’s gifted assistants.

Depicting a semi-bearded young warrior wearing a crested helmet decorated with griffins, dogs and surmounted by a sphinx, the present bust is a copy of the so-called Borghese Ares type, named after the monumental statue of the God of War from the Borghese collection, now in the Musée du Louvre (inv. no. MA 866). The Borghese Ares is generally considered to be a Roman Imperial copy of a 5th-century BC original by the Greek sculptor Alcamenes, though an alternative hypothesis that the model could instead have been conceived in the Augustan period has been proposed (see Hartswick, op. cit.). Numerous ancient Roman replicas of the Ares have survived, most as fragments of the figure’s head. Perhaps the most famous of these is that now in the Hermitage Museum, St Petersburg (inv. no. 108), which was found near Rome in 1772, restored as a bust, and subsequently acquired by Ivan Ivanovich Shuvalov, who transferred it to St Petersburg in 1777. While other antique examples were known – such as a head in the Munich Glyptothek (inv. no. 212), whose neoclassical restorations have now been removed – the present bronze clearly copies the bust in the Hermitage, as is betrayed by the specific design of its helmet; note, in particular, the griffin’s leg merging with the palmette on the proper left side, a detail seemingly unique to the Hermitage head.

Francesco Righetti (1738-1819) and his son, Luigi (1780-1852), were among the foremost bronze founders of Rome in the late 18th and early 19th century. Renowned for their fine reductions of antique sculpture for a Grand Tour clientele, the Righettis cast bronzes of exceptional quality and finish. In 1808 the duo were bestowed the honour of being personally chosen by Antonio Canova to produce the colossal bronze version of one of his most significant commissions, his statue of Napoleon Bonaparte as Mars. Despite an unsuccessful first attempt, which caused the second, finished bronze to be financed privately by Canova, the Righettis’ relationship with the sculptor continued until the year of Francesco’s death, when they were entrusted with the casting of Canova’s monumental bronze statue of King Charles III of Naples (1818-1819). Dated 1821, the present bronze was almost certainly cast by Luigi (Teolato, op. cit., p. 224). The fact that its inscription refers to his inherited foundry as that of 'F. Righetti' may represent a tribute of sorts to Luigi’s late father, who had died only two years previously.

Formerly identified as the Homeric hero Achilles, the Hermitage Ares, along with other antique versions of the model, was keenly copied in the late 18th and early 19th century. Marble busts by neoclassical sculptors that reproduce the model are preserved in Milan (Galleria d’Arte Moderna) and Naples (Palazzo Reale). As indicated by the inscription 'Studio di Sculptura A. Canowa', the present bronze appears to be based on a copy of the Hermitage Ares made by a workshop member of Canova. Despite leaving Rome in 1777, the ancient model will undoubtedly have been available to sculptors in the following decades through plaster casts. Contrary to some accounts, Canova is documented to have employed numerous assistants at his Roman studio. At least some of these were engaged in the restoration of antiquities, and one, Antonio D’Este, was recommended by the master to sculpt a copy after the antique for the King of Poland in 1789 (Honour, op. cit., pp. 220-221). Since, according to Honour (ibid., p. 222), 'between 1815 and 1822 Canova probably employed a greater number of assistants than ever before', it is plausible that the present bronze was cast from a model made by one of them. A work of both visual and intellectual grandeur, it was probably commissioned by an erudite patron, who would have appreciated the literary inscriptions found on its reverse. In line with the influential writings of Winckelmann, the Horatian verse quoted in the signature reflects on the dominance of Greek artistic achievement over ancient Rome: 'Greece, the captive, made her savage victor captive, and brought the arts into rustic Latium.' (Horace, Epistles, 2.1.156).