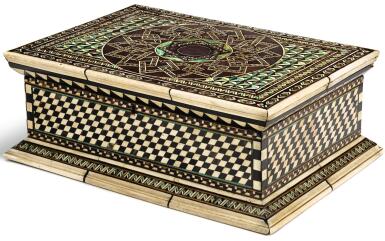 bone, horn and wood intarsia, on a later ebonised wood core with metal hinges, lined with velvet on the interior

Overall the condition of the casket is good with dirt and wear to the surface consistent with age. There has been a degree of restoration to the casket. The hinges, lock and interior lining are all replacements. A few pieces of green stained bone have been replaced with a composite material. It is possible that the central roundel and border may have been reattached or replaced. There are various small losses to the intarsia which have been filled with a wax composite, where wood or horn has been lost this is a brown colour. There is a loss of a strip of material at the left side of the box near the back. There is some stable splitting including along some of the joints, consistent with the material and technique. Some joints are a little open but are stable. Some pieces of intarsia may have been reattached, and there are glue residues. The underside is lined with a later felt like material. There is stable splitting to the wood core to the underside consistent with the material.

This beautifully decorated, large casket showcases the Islamic-inspired intarsia technique. Specialist workshops existed in the Spanish cities of Cordoba and Granada and then flourished in Northern Italy from the 14th century, most famously in Venice, where Baldassare Ubriachi led the production of such works around 1400, with the addition of figural reliefs in bone. The present casket is composed wholly of geometrical patterns and, as such, is more difficult to place within a precise milieu. A closely comparable star-shaped pattern, as well as the cursive chequerboard, are seen in a casket published in Lorenzelli (op. cit., fig. 331), there dated to the 15th century. However, a casket in the Victoria and Albert Museum showing similar patterns (inv. no. 936-1904) has most recently been given a dating of around 1550, on account of the design appearing on a lute in the same museum (inv. no. 193-1882), whose maker is known to have been active in Venice in the middle of the 16th century.