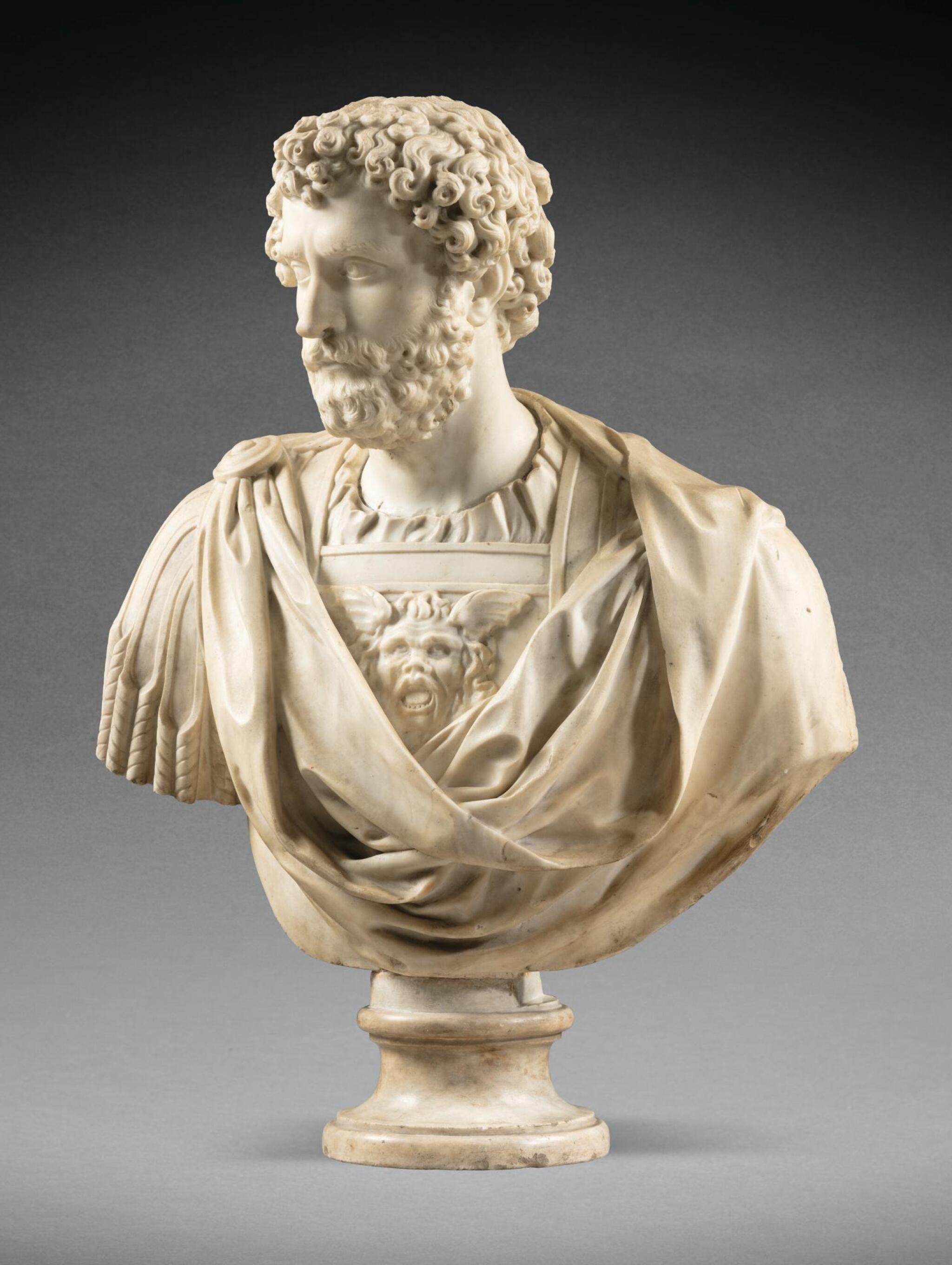 Overall the condition of the bust is very good with minor dirt and wear to the surface consistent with age. There are a number of minor naturally occurring inclusions, in particular to the drapery at the proper right side. There is some paint residue to the back. There is very minor natural veining to the marble. The socle is a resin replacement.

This intriguing bust relates to a bronze bust of Hannibal which is depicted in Nicolas Chavalier's engravings of the Galerie de Girardon (Bnf, inv. no. FOL-AA-56). The bronze is known in two versions, one in the Biblothèque Mazarine in Paris, and the other in the Museum of Antiquities, University of Saskatchewan (the latter bust was later owned by Napoleon Bonaparte). These busts are believed to have been made by François Girardon or his pupil Sébastien Slodtz and they appear to relate to the full length portrait of the Carthaginan general executed by Slodtz after a model by Girardon in 1722 and now in the musée du Louvre (inv. no. MR2093). The identification of the model as Hannibal is possibly explained by a drawing of the same man in the Louvre by Charles Le Brun (1619-1690) which bears the inscription 'Hannibal' (Deux têtes dites d'Hannibal, musée du Louvre, Paris, inv. no. 28242). The sitter of the original portrait from which this derives is nonetheless unlikely to be Hannibal and is today identified as the Emperor Septimius Severus. The present bust, along with the Le Brun and Girardon models, was probably inspired by a 17th-century marble after the antique (circa 1676-1700) which is now in the gardens at Versailles. (inv. no. 1850.9370; MR250); a very similar bust is at Wilton House. Whether or not the Versailles bust was inspired by ancient portraits of Septimius Severus is nonetheless an open question. It indeed recalls a portrait bust of the Emperor in the Louvre (inv. no. MA 1120) but lacks the Emperor's characteristic fringe. An alternative identification as Antoninus Pius should be considered. Compare, for example, with the 2nd-century C.E. bust of this Emperor in the Museo Archeologico in Naples (inv. no. 6031).

Regardless of the identification of the sitter, the present bust certainly relates to the Girardon model in that it is adorned with a near identical mask to that seen on the bronze busts of Hannibal. Furthermore, the mask is very similar to a design by Girardon on a decorative shield on his Fontaine de la Renommée of 1676 (Souchal supplementary volume, op. cit, pp. 99-100, no. 39). An attribution to a sculptor working within Girardon's immediate orbit therefore seems justifiable.