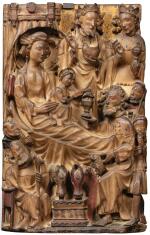 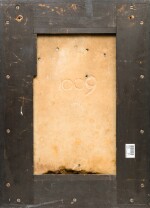 ENGLISH, PROBABLY NOTTINGHAM, SECOND HALF 15TH CENTURY | RELIEF WITH THE ADORATION OF THE MAGI AND THE SHEPHERDS

ENGLISH, PROBABLY NOTTINGHAM, SECOND HALF 15TH CENTURY | RELIEF WITH THE ADORATION OF THE MAGI AND THE SHEPHERDS

RELIEF WITH THE ADORATION OF THE MAGI AND THE SHEPHERDS

partially gilt and polychromed alabaster, in an ebonised wood frame

Overall the condition of the alabaster is very good, with minor dirt and wear to the surface consistent with age. There are a few chips and abrasions to the alabaster, in particular to the edges of the relief, including a few larger chips to the top right corner and to the right edge at the bottom, behind one of the shepherd's legs. There is a small chip to Christ’s aureole. There are a few drilled holes to the background which may have been intended for mounting, including one at the centre at the top edge where there is also a small loss to the alabaster. There is a further small hole to the background next to the Virgin’s proper left shoulder. There are a few minor losses, including to the tips of the ass’s ears, to the tip of Joseph’s nose and to the fingers of his proper right hand, to Christ’s proper right forearm, and to the lid of the chalice. There is rubbing to the high points, in particular the noses, and there are minor chips and abrasions in areas. There appears to be a vein to the kneeling Magi’s forehead. There are extensive remnants of gilding and polychromy. It is possible some of the polychromy may have been refreshed. The condition of the frame is very good, with minor general wear to the surface. There is an area with specks of white residue, possibly paint, on the left side of the frame, some of which is also visible to the alabaster to the figure of Joseph.

Nottingham, in the English Midlands, was the principal centre of production of alabasters in England from the 13th through to the 16th centuries, although they were also worked in Burton-on-Trent, Chellaston, York, and even as far south as London. The widespread distribution of Nottingham alabasters throughout Europe, even as far as Iceland, confirms that they were carved both for the domestic market, but also for export.

The present alabaster panel, which retains much polychromy and gilding, would originally have been part of an altarpiece with scenes of the Joys of the Virgin. This theme is most famously depicted in the Swansea Altarpiece, one of few Nottinghams to have survived in its original frame, now in the collection of the Victoria and Albert Museum (inv. no. A89-1919). The present composition is mirrored in comparison to the Adoration panel in the Swansea Altarpiece, however, and is more elaborate, as it includes the smaller figures of shepherds alongside the more imposing figures of the Magi. It bears closest comparison to an Adoration of the Magi published by Cheetham (op. cit. no. 110), which shows the Virgin with a similar headdress, and the sleeping Joseph in the bottom left corner. In Cheetham's 2003 work (op. cit., pp. 82-88) all known versions of Adorations of the Magi are listed; although Cheetham is aware of 104 examples of the 'Adoration of the Magi, with Mary and Joseph (fifteenth century)', he only lists five versions of the 'Adoration of the Magi and the Shepherds, with Mary and Joseph', indicating that the present lot was a rare composition in the oeuvre of the alabaster carvers. ENGLISH, PROBABLY NOTTINGHAM, SECOND HALF 15TH CENTURY | RELIEF WITH THE ADORATION OF THE MAGI AND THE SHEPHERDS
Lot Closed
Lot 16