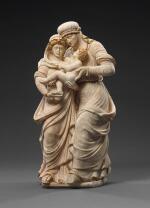 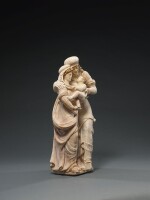 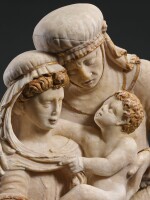 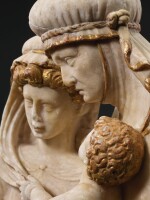 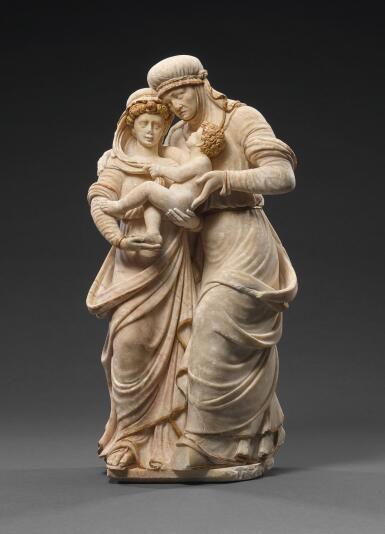 SAINT ANNE WITH THE VIRGIN AND CHILD

This beautifully carved group representing St Anne with the Virgin and the Christ Child has been attributed by Dr Antoni José i Pitarch to a workshop linked to the celebrated Spanish Renaissance sculptors Diego de Siloé and Felipe Vigarny when they were both active in Burgos working on sculpture for the Chapel of the Constables (capilla de los Condestables) in Burgos Cathedral. St Anne became an important figure of veneration in Spain during the 16th century and the image of Anna Selbdritt or St Anne with the Virgin and the Christ Child was transferred to Spain from northern Europe by Flemish sculptors who worked in Castille and Andalusia. The present group has been executed on a small scale which creates a sense of preciousness. It embodies many of the advancements introduced to Spanish sculpture by Diego de Siloe who was described by the theorist Francisco de Hollanda (circa 1517/18-1584) as one of the seven 'eagles' of the Renaissance in Spain. Note the characteristic flowing drapery and the tactile nature of the figures. Compare with the group of the Virgin and St Joseph holding the Christ Child in the Altarpiece with the Circumcision from the Constables Chapel. Note also an alabaster relief from the circle of Vigarny, dated to circa 1530, in the Victoria and Albert Museum, London (inv. no. A. 185-1919). This is carved with an image of the Pietà and shows the Virgin in a similar headdress which sweeps across the chest to the shoulder. The quality of the carving of the present group is very fine, and the alabaster has an attractive warm hue.

An expertise by Dr Antoni José i Pitarch, University of Barcelona, is available upon request.