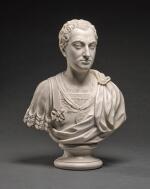 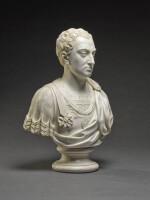 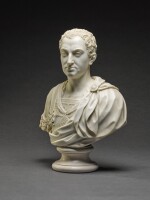 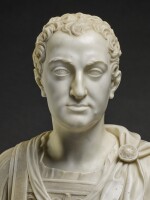 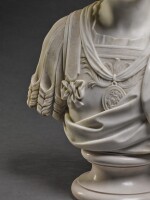 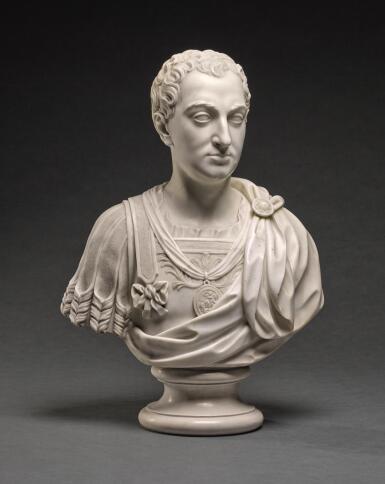 Overall the condition of the bust is very good with minor dirt and wear to the surface consistent with age. There are a number of minor naturally occurring inclusions, in particular to the drapery at the proper right side. There is some paint residue to the back. There is very minor natural veining to the marble. The socle is a resin replacement.

This impressive bust is a new addition to the oeuvre of one of the most prominent sculptors in Britain in the 18th century, Peter Scheemakers. The bust is near-identical to another portrait of Frederick, Prince of Wales, eldest son of George II and father of George III, in the Royal Collection (inv. no. RCIN 311649). It appears to be a variant of the Royal Collection bust, which differs in having more elaborately etched detail across the surface of the cuirass. The present bust is, however, very close in almost every other respect, including in the facial characteristics, such as the prominent eyebrows, which are, in fact, a feature in many of Scheemakers busts; see for example the bust of Richard Temple, 1st Viscount Cobham in the Victoria and Albert Museum, London (inv. no. A.1-1942). In the present bust, Scheemakers has underscored the sitter's status by incorporating the fleur de lys into the decoration of the cuirass at the sternum, as well as the Lesser George, which is suspended from a ribbon about the neck and, unlike the Royal Collection bust, is elaborated with the inscription Honi soit qui mal y pense. As with many of Scheemaker's known portrait busts, it seems possible that the present bust may have had a socle with the sitter's arms, titular inscription and, possibly, a signature.

It is likely that the bust in the Royal Collection is the prime version of the model, since it is known to have been commissioned by Lord Cobham for his Temple of Friendship at Stowe, which formed part of Cobham's elaborate allegorical scheme of statuary setting out his opposition to Sir Robert Walpole. The Temple was conceived in 1737 after the Prince had visited Stowe. It was designed by James Gibbs and completed in 1742. Alongside Scheemaker's busts of the Prince of Wales and Lord Cobham himself (discussed above) were busts of Cobham's political allies in the Whig party: Earl Bathurst, the Earl of Marchmont, Earl Temple, Lord Gower, the Earl of Chesterfield, William Pitt the Elder, George Lyttleton, and the Earl of Westmoreland. Given the date of the Royal Collection bust (1741) it is probable that the present bust was executed in the 1740s, probably for a Whig supporter of the Prince of Wales. No other versions of the model are known, making the present bust very rare.

Peter Scheemakers was a Fleming by birth who settled in London in 1720 having trained under his father in Antwerp and then in Copenhagen. In 1722 Scheemakers worked with Pieter-Denis Plumier (1688-1721) and Laurent Delvaux (1696-1778) on the funerary monument to the 1st Duke of Buckingham at Westminster Abbey. He later collaborated with Delvaux and accompanied him to Rome in 1728 where he lived for three years. Scheemakers eventually settled in London where he established a reputation for himself as a rival to the greatest sculptors of the age active in Britain: Michael Rysbrack (1694-1770) and Louis François Roubiliac (1702-1762). Amongst his most famous works is the Monument to William Shakespeare at Westminster Abbey (1741). Scheemakers was a favourite sculptor of Frederick Prince of Wales, who commissioned historicising busts of Dryden, Milton, Shakespeare and Spenser from him; he also executed chimneypieces and garden statuary for him.