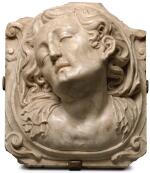 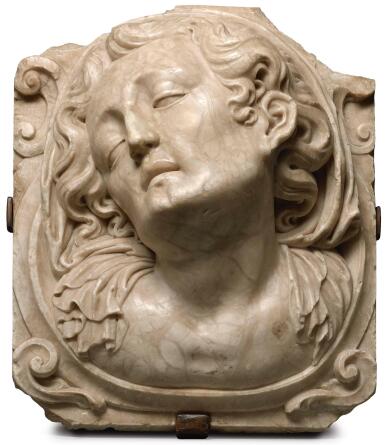 RELIEF WITH A MOURNING WOMAN

alabaster, in a metal mount

Overall the condition of the alabaster relief is very good with minor dirt and wear to the surface consistent with age. The relief would have been part of a larger whole (tomb or altar) from which it has been removed; as such the corners are lost. There is a larger losses to the upper corners and right scroll. The nose is restored. There are some further small chips including to the proper left ear. There are some very minor chips, abrasions and scratches to the high points. There is natural veining to the alabaster including a few slightly open veins to the forehead. There are minor dirt marks to the chest. There is an oxidised old nail to the top right corner. There is minor oxidation to the later metal mounts.

This moving alabaster relief has been confidently attributed to the influential Catalan sculptor Joan Grau by Dr Joan Bosch i Ballbona. Grau was a native of Tarragona who went on to produce major religious sculpture for Catalan churches including his masterpiece: the altarpiece in the Monastery of Sant Benet de Bages (1642). The present alabaster compares closely with works produced by Grau for the monastic church of Santa María de Poblet, which had been commissioned by Lluís Ramon Folch duke of Cardona and his brother Pedro Antonio de Aragón. Dr Bosch Ballbona compares the present work in particular with works from the 'sepulchral chamber's' of the church, in particular the Head of a Man Crowned with Laurels and the Head of a Woman Wearing a Pearl Necklace. Grau's works at Santa María de Poblet were dismantled during the secularisation of the 19th century. Bosch Ballbona suggests that it is possible that the present work could have come from one of the destroyed monuments, but concludes that it is more likely to herald from an unknown project of which visual records are no longer extant. The quality of the carving of the present relief is very fine and exemplifies Grau's expressive style with flowing lines and movement.

﻿An expertise by Dr Joan Bosch i Ballbona, Professor at the Universitat de Girona and Technical Director of the Catalan Institute for Cultural Heritage Research, is available upon request.