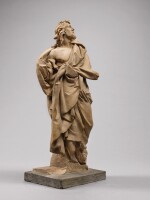 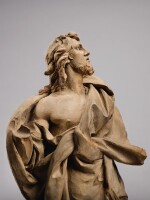 The terracotta is a fragment and many of the extremities are lost: the feet, much of the proper left side and the proper right hand and wrist. There are some smaller losses, including to some of the edges of the drapery and to the hair on the proper right side. However, what remains is in very good condition. The terracotta does not appear to have a slip to the surface and appears to retain its original sketchy surface which is very attractive. The head does not appear to have been off. The figure is set into a later base which has a few minor stable cracks. There are a few minor stable firing cracks to the reverse.

This very fine terracotta appears to be a rediscovered bozzetto by Camillo Rusconi for his seminal St James the Greater in the Archbasilica of St John Lateran in Rome. In 1699 Cardinal Benedetto Pamphilj became Archpriest of the Lateran and set about the redecoration of the church. The programme took on new impetus in 1700 when Giambattista Albani ascended to the Papacy as Pope Clement XI and, in 1700, gave six thousand scudi for a series of statues of Apostles to fill the empty niches in the church. The leading sculptors of the day including Carlo Fontana and Carlo Maratta were enlisted to work on the project. Camillo Rusconi was responsible for a number of the Apostles: St Andrew (1709), St John (1713), St Matthew (1715) and finally the St James the Greater (1718). Interestingly, Frederick Den Broeder has noted that large scale wood and plaster models were placed in the niches whilst the marbles were being carved from bozzetti and modelli in the workshop (op. cit.). Although fragmentary, the present terracotta is near-identical in composition to Rusconi's final masterpiece in marble. It betrays virtuoso handling of the drapery and particular strength of modelling in the face. Note the similar treatment of the eyes to a pair of terracotta Summer and Winter studies from the Workshop of Rusconi formerly in the Sackler collection and sold at Sotheby's New York on 29 January 2010, lot 461. The terracotta is freshly modelled, beautifully finished to the reverse, and bears fingerprints to the surface. The sketchy appearance of the present terracotta together with the closeness in composition to the finished marble indicates that it is a bozzetto made by Rusconi himself or at least that it originates from the workshop. The Lateran Apostles proved to be one of Rusconi's most important commissions and established his reputation as the leading sculptor in Rome in the first half of the 18th century.