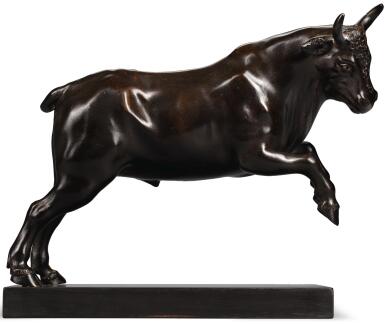 Overall the condition of the bronze is very good, with some dirt and wear to the surface consistent with age. There is minor wear to the lacquer patina at the high points. There are several small nicks and scratches. There are a few minor original casting fissures and lacunae, notably to the abdomen and the haunches on the proper left side. Minor general wear to the painted wood base.

The present bronze relates to a group of The Rape of Europa in the Fitzwilliam Museum in Cambridge, in which Jupiter, in the guise of a bull, bears the abducted Europa on his back.  The Cambridge bronze is cast as two separate pieces, with a large aperture in the bull's back to accommodate Europa and her drapery, and is the only version of the model known. Although the presence of an almost identical wax model in the Museo di Doccia suggests it was made for production in porcelain, no such versions are known; the wax is documented in an 18th century inventory as the work of Foggini. Clearly derived from the Foggini model, the present bull is without a mount; alone it recalls the pacing and rearing quadrupeds of Giambologna and his Florentine followers though no other lone rearing bull has survived from those workshops. Inspiration for the animal ultimately comes from the ancient marble group of the Farnese Bull, in which the sons of Antiope struggle with the similarly rampant bull. There the head twists left and not right. Interestingly the present bull has an almost identical tail placement to the wax and plaster Doccia models, as opposed to the more hooped tail seen in the Fitzwilliam bronze and other versions of the lone bull such as the bronze sold at Sotheby's New York on 27 January 2011, lot 440.