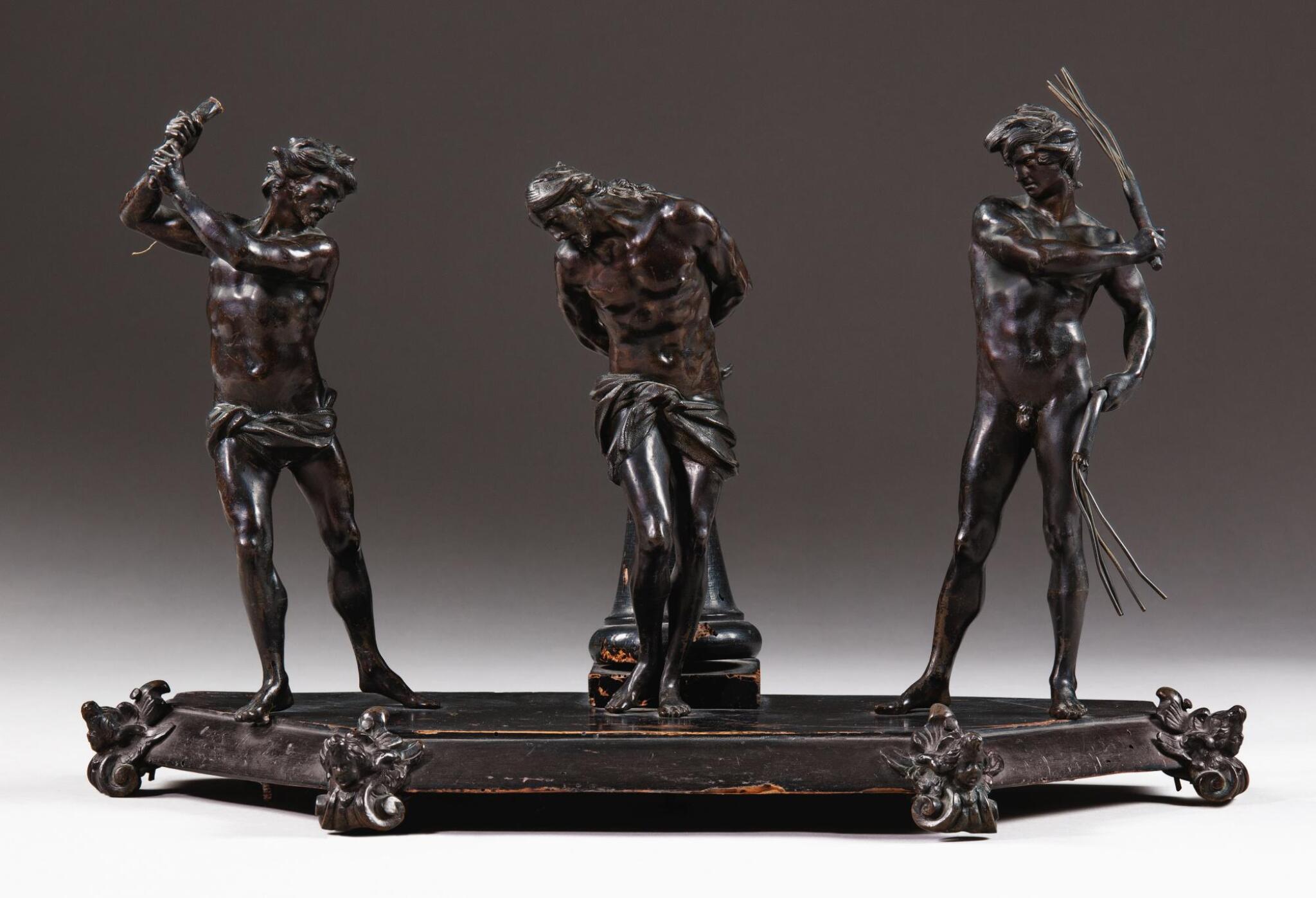 THE FLAGELLATION OF CHRIST

with a label to the reverse inscribed: Piccolomini

Overall the condition of the bronzes is very good with minor dirt and wear to the surfaces consistent with age. The figures are cast in sections and original stable joints are slightly visible including: at the upper arms and at the shins. There are original small holes at the backs of the heads (two to Christ). There are old dark lacquers to the surface, which is flaking in areas including at the figures' legs. There are a few original slightly visible plugs to the bronzes. There are some minor lacunae to some of the crevices. There are some minor fissures including to the left flagellator's back. The right flagellator has lost the upper portion of his weapon. The probably original wood base is ebonised and there is wear to the paint at the edges and to the platform. There is evidence of non active worming to the wood. The bronze appliques are attached to the base with nails. Chris and the column are slightly loose; the metal rope is probably later.

The Flagellation of Christ is one of the quintessential small bronze groups of the Roman Baroque. Famous for its play of balance and movement, the contrast of passive acceptance embodied in the Christ figure, and active violence imbued in his flagellators, the precise attribution of the models has been the subject of much scholarly debate.

Jennifer Montagu, in her seminal 1966 article, first suggested a distinction between two types of the model: although the Christ figure, attributed to Algardi (Montagu 1985, p. 316), is the same in each version of the groups, the flagellators vary. Montagu proposes an attribution to François Duquesnoy for the more passive flagellators, the more 'vigorous' pairs, as in the present model, who throw their whole weight behind their whiplashes and whose hair is swept from their faces by the force of their blows, are proposed to have been conceived by Algardi. Nicholas Penny (op. cit. p. 3) accepts this attribution for the Ashmolean pair of Flagellators, which shows the most significant comparison to the present lot, particularly in the minute punching of the loincloth of the flagellator on the left, and the nudity and stance of the figure on the right. Jeremy Warren, who has most recently considered the problem of attribution of the Flagellation groups (op. cit. p. 601), concludes that "in the present state of knowledge, the problem appears to be insoluble with any degree of certainty", but it can be stated that the model originated in Rome, probably in the 1630s. Warren does mention the present lot to be of the "Algardi-type" (op. cit. p. 602, note 11).

With the debate regarding the two types still unsettled, it can however be concluded that the present group adheres to the type B groups most commonly attributed to Algardi, of which the best-known version is in the Kunsthistorisches Museum in Vienna (Warren, op. cit. fig. 128.1). The present group, with its attractive patina, high finish, and distinguished provenance, is a prime example of this popular composition.