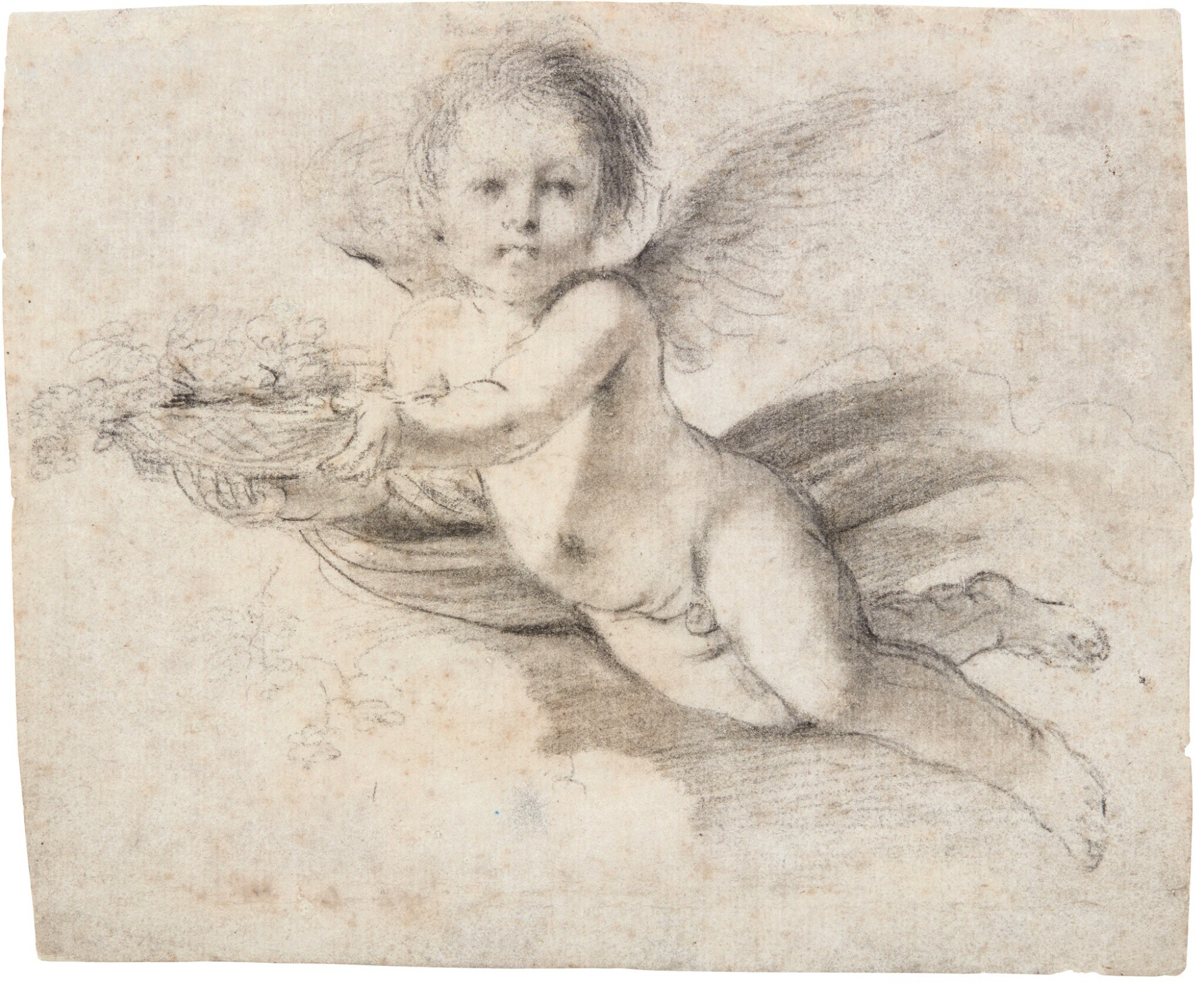 A FLYING PUTTO HOLDING A BASKET WITH FLOWERS

on the mount bears pencil annotation by Sir Denis Mahon: 'This drawing seems to me on stylistic grounds to date from the mid sixteen-forties./Rather analogous putti can be found in the upper part of the "Sante Geltrude e Lucrezia" painted in 1645 and now in the Galleria Sabauda at Torino (illustrated in Luigi Salerno's "Dipinti del Guercino", p. 299, no. 225)./ Denis Mahon 2001'

Hinged to the mount at the upper margin. Very light foxing throughout. Tiny nicks and tears at the right margin. The pen and ink inscription on the verso is slightly perceptable on the recto. Surface dirt. Top margin repaired and some very small repairs at the top of the sheet on

On loan to The Courtauld Institute of Art, London, Prints and Drawings Department, 2011-2017

A handsome black chalk study by Guercino, this drawing was identified by Sir Denis Mahon (as he himself noted on the mount) as a first idea for one of the putti which can be found in the upper section of the altarpiece with Saints Gertrude and Lucretia, now in the Galleria Sabauda, Turin (fig. 1).1

The painting was commissioned and paid for in 1645 by the Duca d'Altemps, most probably Gianpietro d'Altemps (1515-91). Contrary to the account of the biographer Malvasia,2 the altarpiece was not sent to Germany but was placed in the Roman church of San Nicola da Tolentino, in a chapel belonging to the Lante family, which eventually sold the painting in the 19th century.

As Pulini has observed (see Literature), Guercino reused this drawing with variations in other, later paintings, notably for the putto in the upper part of his 1659 depiction of St. Anthony of Padua, now in the Museo della Città, Rimini. According to Malvasia, this altarpiece was commissioned for the city of Rimini by the wealthy merchant Francesco Manganoni, and installed in the high altar of the local church of San Francesco di Paola.3

This rather finished late drawing demonstrates very well Guercino's ability to represent and capture effects of light, here emphasized by the use of stumping, a technique not often employed by Guercino's contemporaries. As in his red chalk drawings, stumping was used by the master to achieve subtle nuances in the transition between shadows and lights, resulting in the subtle and velvety quality in the rendering of the skin which characterizes so many of his most attractive sheets.