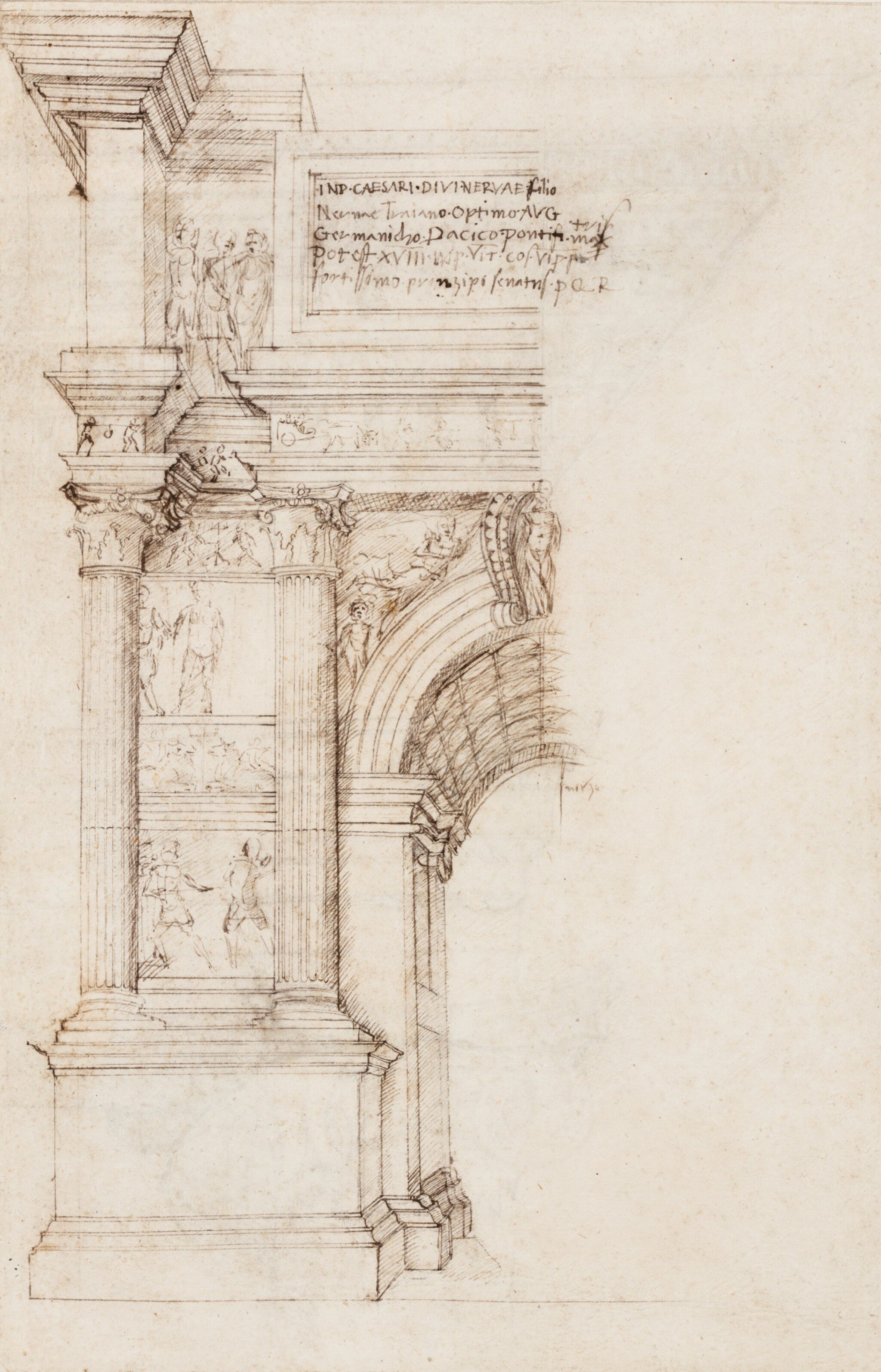 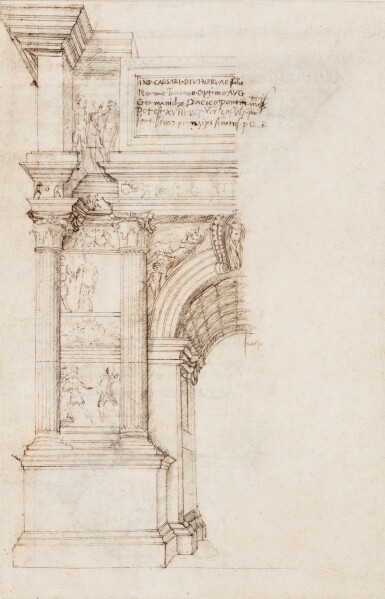 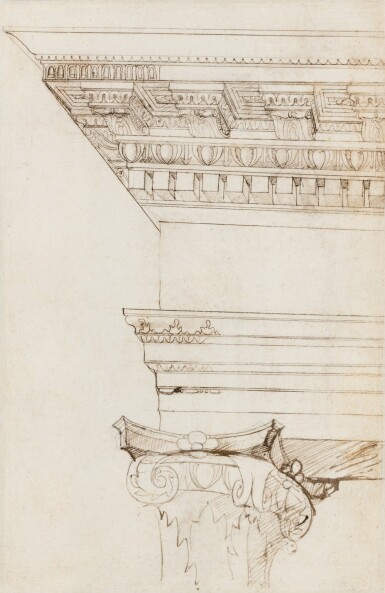 RECTO: A STUDY IN HALF ELEVATION OF THE LEFT HALF OF THE SOUTH-WEST OR CITY FAÇADE OF THE ARCH OF TRAJAN AT BENEVENTO;

Pen and brown ink over traces of black chalk (recto and verso);

Sweden, Eriksbergshallen, Gothenburg, And There was Light: Michelangelo, Leonardo, Raphael, The Masters of the Renaissance, seen in a new light, 2010, no. 9 (catalogue entry by Alessandro Vezzosi);

This double-sided drawing, depicting the Arch of Trajan at Benevento, is an exceptionally early and rare study by one of the greatest Renaissance architects, Francesco di Giorgio Martini (1439-1501).

Francesco di Giorgio, as well as a highly erudite architect was also a successful painter and sculptor. He was the author of three architectural treatises and also translated Vitruvius and as Dr Arnold Nesselrath remarks, ‘he is responsible for the earliest extant drawings of Roman Antiquities by an architect, which exerted an enduring influence on later architects.’1  Following in the tradition and principles established by Filippo Brunelleschi, Francesco di Giorgio along with Antonio da Sangallo played a fundamental part in the evolution of the framework and landscape of Italian cities.

This refined and elegant half elevation study demonstrates the importance of the ‘Antique’ to architects at that time and reveals the practice of so many artists and architects from 1400-1600 who were looking to the Ancient World for inspiration and technical guidance. It became commonplace for architects to travel throughout Italy and abroad to study ancient ruins and remains, to have a clear understanding of the Ionic, Doric, Tuscan, Corinthian and Attic orders. These studies were then preserved as source material to consult when back in the studio where they were often re-interpreted by the individual architect and incorporated into their own innovative designs.

Francesco di Giorgio would have seen the Arch of Trajan at Benevento during his trip to Naples in circa 1491, when he visited ancient and medieval monuments in Campania. Many of the artist's sketches and studies are contained within the Taccuino dei Viaggi now housed at the Uffizi, Florence. Dr Arnold Nesselrath’s entry on this drawing discusses the many similarities between our Arch and the drawings contained within the Uffizi sketchbook, which has also been dated circa 1491.

The recto of this grand scale drawing illustrates the left half of the south-west or city façade of the Arch of Trajan at Benevento and the verso depicts an enlarged detail of the same arch, highlighting specific elements and ornamental features. Dr Nesselrath compares the handwriting displayed in the panel on the arch with other drawings in the Taccuino dei Viaggi (UA 318-337) and informs us that the same word Mezo that is located under the coffered vault, is evident in UA 322v.2 The figures, although loosely sketched, are a lively and animated addition to this refined technical drawing. As Dr Nesselrath points out, the crosses on their faces and their small circular eyes have parallels in figures in the sketchbook pages UA 335 and 335v.3 He also notes that the two bulls that divide the horizontal scenes can be compared to animals from the frieze on UA 324.4 In comparison to other surviving works by the artist, Dr Nesselrath remarks that the present sheet is the only known drawing of this level of refinement by Francesco di Giorgio known so far. There are differing opinions on when the Arch of Trajan was erected but the common modern view suggests it was completed by Hadrian in A.D. 118 and it is considered one of the most splendid monuments to have survived from antiquity.5

This drawing not only provides a visual history in the development of architectural drawing but it also, through its illustrious provenance, reveals a fascinating insight into the history of collecting. The drawing once belonged to the most revered art patron of the 17th Century, Cassiano dal Pozzo (1588-1657). Cassiano was a distinguished patron and collector and his thirst for knowledge in the field of antiquities and natural history led to an ambitious project that he described as his Museo Cartaceo or Paper Museum. Together with his younger brother, Carlo Antonio they built an immense collection of paintings, books, medals and drawings. Cassiano commissioned young artists to make copies of all aspects of Roman Civilization and in addition he also collected drawings, like the present sheet, by celebrated artists that he admired and wanted to acquire examples of their works for his ever-expanding collection.

This extraordinary drawing is not only a visual delight in its technical depiction of the Arch of Trajan, it is also a lasting legacy of the talented renaissance architects and of the esteemed patrons who recognised the importance of preserving these studies, making it possible for us to continue to enjoy and learn from them today.