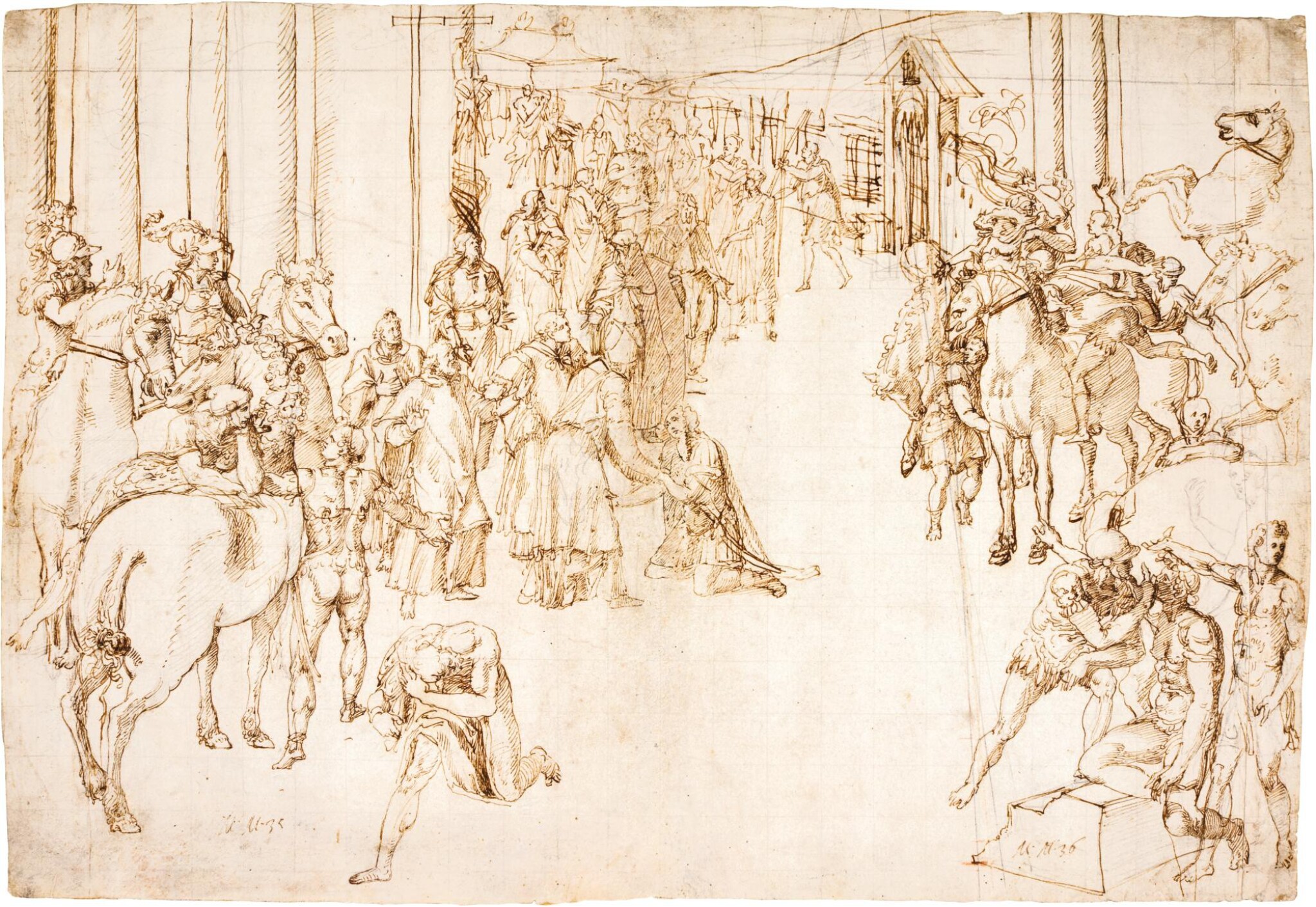 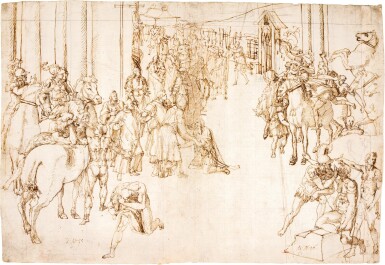 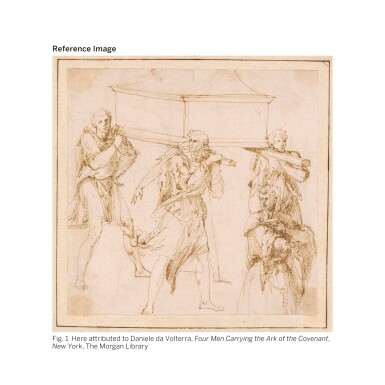 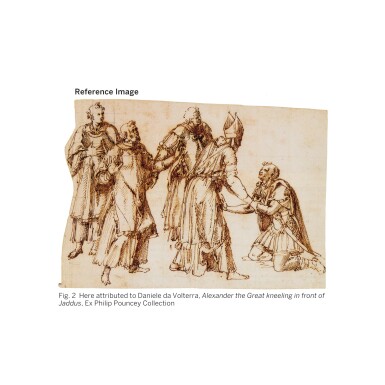 ALEXANDER THE GREAT KNEELING IN FRONT OF JADDUS, THE HIGH PRIEST OF JERUSALEM

Pen and brown ink, black chalk and touches of red chalk, squared for transfer in black chalk, the sheet extended to the left and right edges;

numbered in black chalk on the central grouping: 13

Hinge mounted in three places along the upper edge to a card backing which has subsequently been hinged to a modern cream mount. There is an additional strip of paper adhered to the right edge of the drawing by the artist. There is some minor surface dirt to the sheet and some small nicks and tiny old tears to the extremities. There is some minor rubbing to the centre of the sheet but the combination of media remain in otherwise good condition throughout with the image strong. Sold in a modern giltwood frame.

This unusually large and finely preserved compositional drawing was previously attributed to the Sienese artist, Bartolomeo Neroni, by Philip Pouncey, prior to being exhibited in Edinburgh in 1969 (see Exhibited). Recent study and further detailed scrutiny of the drawing has shed a new light on this impressive sheet, with a compelling case now being made, on stylistic grounds, for this drawing being a highly rare and previously unrecorded, early compositional study by the young Daniele da Volterra.

Although Daniele is most notably remembered, as described by Giorgio Vasari, for his accomplishments in Rome alongside Perino del Vaga and Michelangelo, it was in early 16th century Siena, under the tutelage of Sodoma and Baldassare Peruzzi, that the young artist received his artistic formation. This strong Sienese influence is clearly evident in the present work, a factor which invariably led to Pouncey’s previous attribution to Neroni, who was himself the son in law of Sodoma. However, when one closely examines the idiosyncratic graphic style of this drawing, executed in pen and brown ink over black chalk, stylistic comparisons with other known drawings by Neroni, which tend to possess a more provincial quality, cease. One of the most fundamental stylistic quirks to note in the present work are the highly distinctive and vigorous brown ink, parallel strokes made by the artist to indicate shadows, a technique that we see consistently employed by Daniele, within a homogenous corpus of surviving black chalk figure studies in the British Museum, London and Rijskmuseum, Amsterdam.1 Though the majority of our drawing is executed in brown ink, the black chalk drawing that is visible, such as the alternative seated male figure, found in the lower right corner, is also highly consistent with the aforementioned chalk studies by Daniele. This coupled with the distinctive “hollow” eyes of the figures, another trait of the artist, create an increasingly compelling case for his authorship of this sheet.

In addition to the stylistic qualities that this drawing possesses, there is a further persuasive link to be drawn with Daniele, as the present work, as recently identified by two distinguished art historians, also contains a figure study quoted in both a painting and further drawing by the artist. The figure in question is the kneeling man found in the centre left foreground of our drawing, who similarly appears in a painting executed by Michele Alberti, under the immediate direction of Daniele, of The Baptism of Christ, housed in the Ricci Chapel in the Church of San Pietro in Montorio, Rome.2 A drawing by Daniele of this same figure, executed in black chalk and seen in reverse in relation to the painting and our drawing is in the collection of the Musée du Louvre, Paris.3

Beyond the question of authorship lies the subject depicted which, as has been kindly confirmed by Dr. Paul Taylor, is taken from Flavius Josephus’ Jewish Antiquities4 in which the Romano-Jewish historian recounts that Alexander the Great, after his victory over Darius at Issus, approached Jerusalem, whereupon the high priest, an ally of Darius, came out of the city accompanied by priests and citizens, to greet the conquering hero. To the amazement of all, Alexander prostrated himself before the high priest, before subsequently continuing his military campaign, leaving Jerusalem unharmed.

Frustratingly little is known, or recorded, of Daniele’s early career and therefore the function of this drawing remains, for the time being, unknown. The highly ambitious composition and scale of the drawing suggest that it was intended for an important commission and two further studies relating to elements of the composition bear witness to this hypothesis. These additional studies include Four men carrying the Ark of the Covenant,5 an element visible in the background of the present work, formerly in the Janos Scholz collection and now in the Pierpont Morgan Library, New York. Philip Pouncey himself also owned a drawing that relates to the present work, illustrating the central group of figures, including Alexander kneeling in front of Jaddus,6 and absolutely identical in handling and choice of media to the present work and the Morgan drawing (see Figs. 1 and 2).