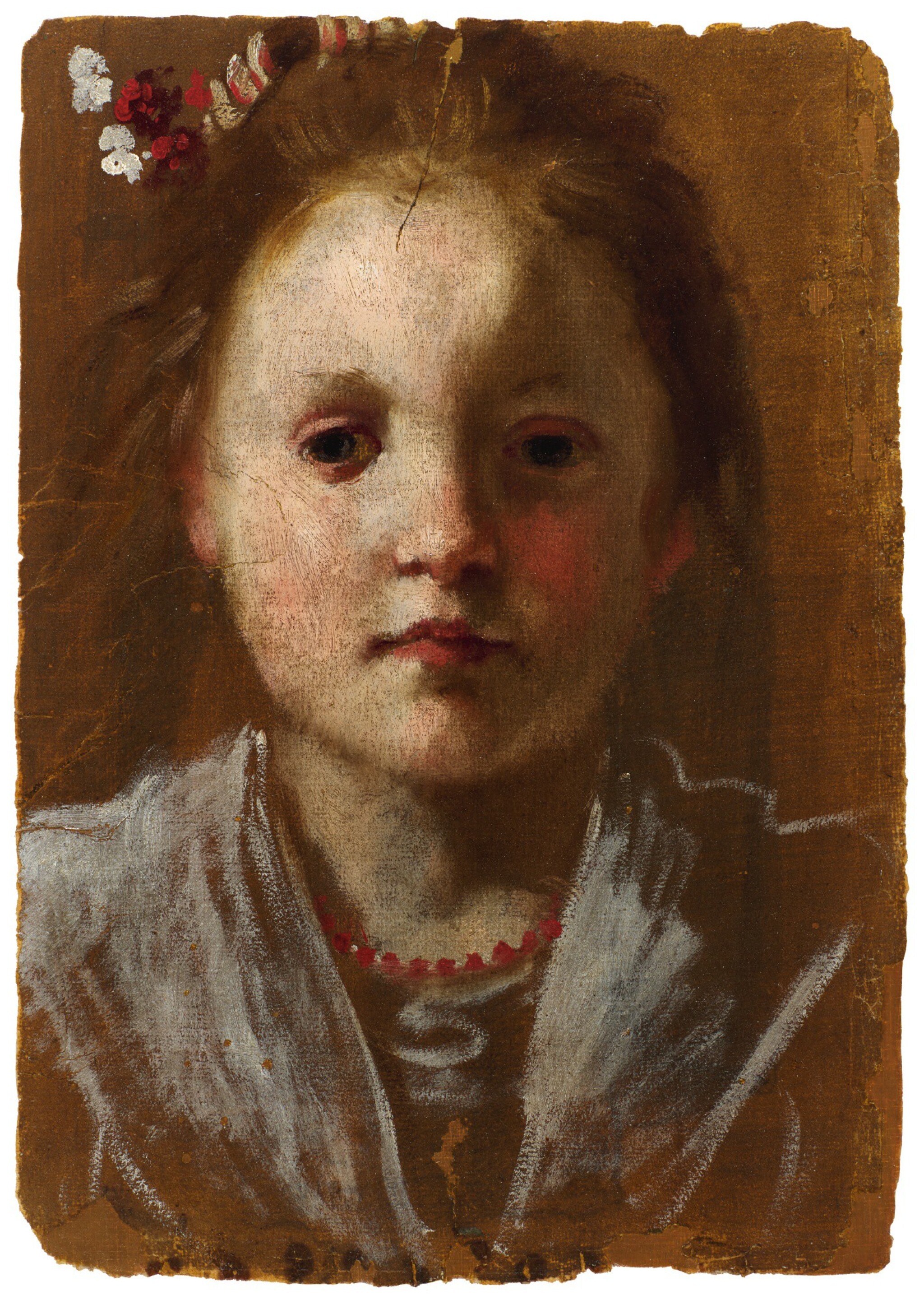 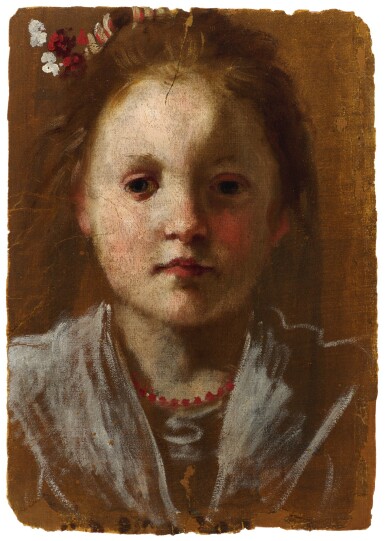 PORTRAIT OF A YOUNG GIRL

Oil on paper, laid down on canvas

Oil on paper laid down on canvas. There is a repaired tear at the upper margin, running vertically through her hair and top of forehead. There are a number of areas made up around the edges of the sheet. There are some cracks in the medium, most noticeable at the left side of the sheet, around the girl's cheek. There are also some areas of abrasion. Overall the colours remain strong and vibrant and it is generally in good condition.

This captivating and extremely rare head study of a young girl is an exciting, newly discovered addition to the celebrated oeuvre of the 16th Century Bolognese artist, Annibale Carracci, whose head studies of this type, executed in oil on paper, are amongst his most celebrated and significant works.

Along with his brother Agostino and their cousin Lodovico, Annibale set up an Academy in their Bologna studio in the early 1580s, where drawing from life models – ‘dal modello’ – was a pivotal element of the artistic education on offer. According to the biographer Malvasia, this focus on nature in the Carracci Academy went much further than was usual at the time, with students drawing constantly, not only from live subjects, both male and female, but also making anatomical studies from corpses, and recording every aspect of everyday life.1 Annibale would surely also have regarded the making of studies in oil on paper, such as this example, as part of the same working practice, and he may have painted a good number of them, but very few have survived, and they are now justly considered amongst his most important and rare works.

Dynamically painted, partly as a result of the artist clearly working directly from life, this portrait was first quickly sketched with thin layers of paint, before subsequently being finished with delightful, subtle touches of color in areas around the sitter’s eyes, nose and mouth, as well as the exquisite flowers that adorn her hair and the coral necklace she wears around her neck. The sitter stares out towards the artist and viewer in a direct but playful manner, displaying a confidence that belies her youthful age. One of the most highly accomplished passages is around the sitter’s mouth, where Annibale, with great economy and fluidity of brushstroke, has created the most marvelous expression which, coupled with the subtle gradation of light between the left and right sides of her face, demonstrates the artist’s discerning powers of observation and directness of thought. Indeed the biographer Bellori's account of Annibale speaks of "Nature" as his teacher, stressing the painter’s gift for direct and true observation: '...Ludovico riconoscendo in lui una fatal forza alla pittura, quasi havesse un maggior precettore, che gl'insegnasse occultamente, cioé la sapientissima Natura, cominciò ad amarlo, e se lo tirò in casa, dando luogo a quella stupenda inclinazione' ('Ludovico could recognize Annibale's extraordinary talent, almost as if he had a superior teacher who was teaching him in secret, this being the erudite Nature, which started to love him, and took him home, nourishing that wonderful inclination').2

Though, as already discussed, portraits executed in oil on paper are extremely rare survivals within Annibale’s oeuvre, the present work can be compared on stylistic grounds to another extraordinary head study, Portrait of a bearded man, sold at Sotheby’s London in 2017.3 Dated by Posner to 1589–90,4 shortly after Annibale’s return from Venice in 1588, this imposing and moving work, much like the present lot, demonstrates a modern and straightforward approach. Both portraits possess a totally timeless quality, achieved through their rapid and vibrant execution, and act as exemplars of Annibale's mastery and bravura as a draughtsman and painter. As is so very evident here, these portrait studies are arresting in their psychological gravity and ability to convey the emotional presence of the sitter. They are, quite simply, among the most striking and original artistic expressions of the late sixteenth century.

We are grateful to Dr. Erich Schleier and Dr. Keith Christiansen who have both supported the attribution to Annibale Carracci in recent correspondence with the present owner.