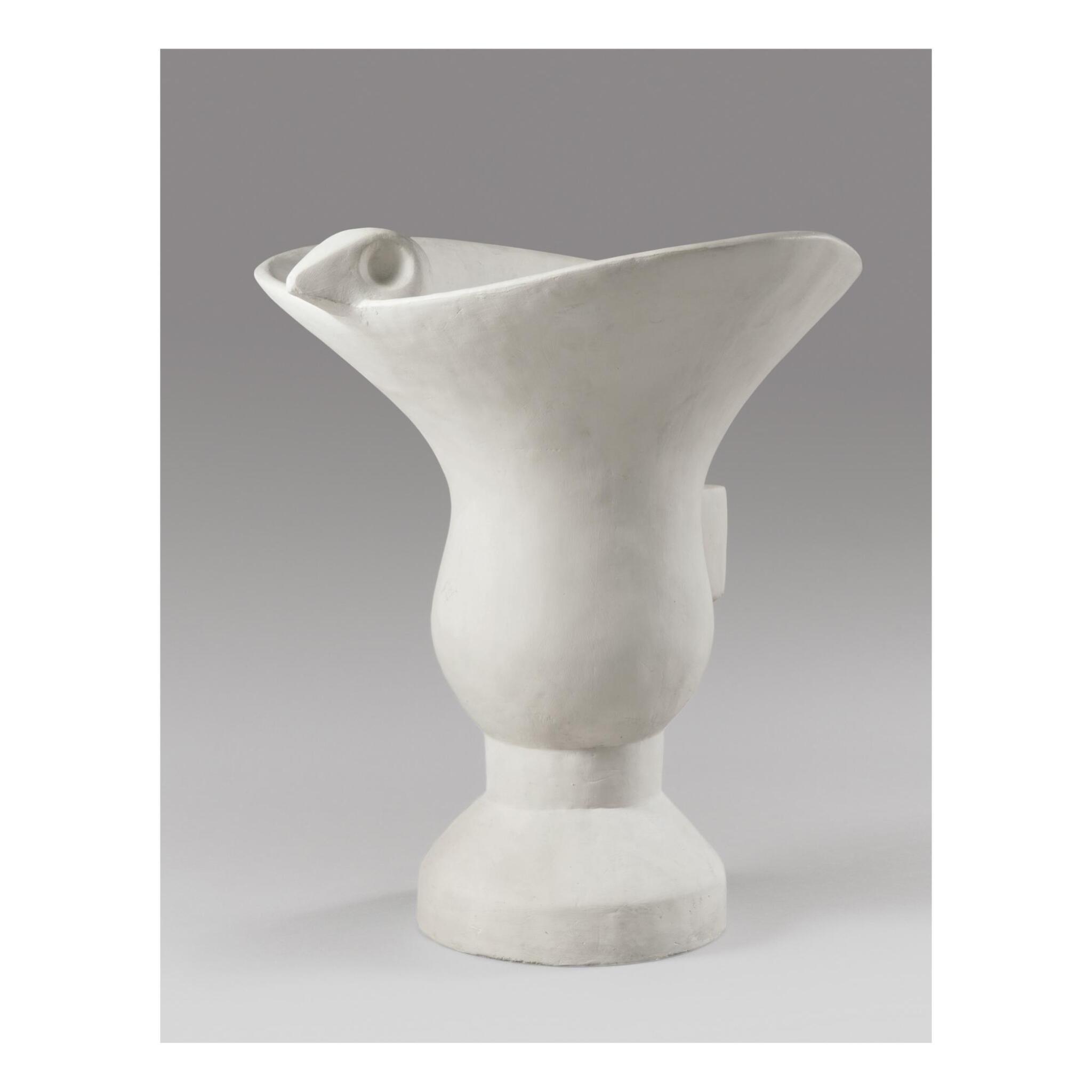 Overall in very good condition. This extraordinary, large-scale vase by Alberto Giacometti displays impressive sculptural presence and a luminous white-painted surface when viewed firsthand. The plaster with scattered minor surface irregularities throughout concentrated to the inside of the rim, the bird’s beak and the base, some inherent to production, which are consistent with age and gentle handling. The vase appears to have been possibly repainted at some point in the history of the piece in a manner consistent with the artist’s intent and which maintains the integrity of the work. The painted surface with occasional and scattered areas of loss to the paint, which reveal the underlying plaster body of the same color and are not visually distracting. The surfaces throughout with scattered minor discolorations concentrated to the inside of the rim and the base, not visually distracting and consistent with age and gentle handling. The rim of the vase on the proper right, upper side (opposite the bird’s head) presents with two hairline cracks that appear to have been conserved and stabilized at some point in the history of the piece, and appear to be stable and not visually distracting. This vase includes its original metal liner which has been partially painted white. An extraordinary and highly evocative sculptural work by Alberto Giacometti. This vase descended in the artist’s family and is in beautifully preserved condition.

Collection of the artist, Paris

Collection of Bruno Giacometti, Switzerland, brother of the artist

Daniel Marchesseau, Diego Giacometti, Paris, 1986, p. 33 (for a period photograph of the model in black in Jean-Michel Frank's showroom, circa 1935)

This lot is offered together with a certificate of authenticity from the Comité Giacometti and it is recorded in the Alberto Giacometti database under number 4064.

Alberto Giacometti’s “Aigle” vase, executed circa 1934, is a spectacular example of the artist’s use of Surrealist elements in his artistic practice. Giacometti was a central figure of the expanding Surrealist movement in Paris in the 1930s. His peers included such artists as Max Ernst, Giorgio de Chirico, Joan Miró and Marcel Duchamp. His introduction to Jean-Michel Frank, one of his most important collaborators, was made by the American photographer Man Ray, another leading figure within the movement. The work that Giacometti produced during this experimental period reflects his proximity with the avant-garde.

The key component of the present “Aigle” vase is the inclusion of an abstract bird, which gives the vase its name. Its presence is striking yet disarming. As the viewer’s eye traces the gently undulating rim of the vase, it is suddenly confronted by the angular face of a bird. The rim is transformed into the bird’s outstretched wings. Its impressive scale imparts the vase with strong visual presence, while the delicacy of the plaster promotes an airy, weightless quality that captures the spirit of a bird in flight. The effect is reminiscent of similar devices used by the Surrealists who relied on animal creatures and everyday objects to create illogical scenes. Birds in particular were central to the work of Max Ernst, a German artist based in Paris and one of Giacometti’s closest collaborators. Ernst had conceived a bird-like creature called “Loplop,” a beaked figure best described as the artist’s own alter ego and impresario. His 1931 collage Loplop Presents Members of the Surrealist Group prominently features the core members of the Surrealist movement, including Alberto Giacometti, Salvador Dalí and Yves Tanguy, among others, all seemingly introduced by a stylized bird on the upper tier of the composition. Birds permeate Ernst’s œuvre in all shapes and forms. The Loplop sculpture by Ernst, possibly executed the same year as the present lot, is a quintessential example of the artist’s treatment of the bird leitmotif. While it is unknown to what degree the artists influenced each other, the undeniable resemblance between Giacometti’s “Aigle” and Ernst’s Loplop invites an intriguing comparison.

The present lot was created shortly before Giacometti’s relationship with the Surrealists started to diminish, which coincided with his flourishing partnership with Jean-Michel Frank, with whom he would collaborate more closely after 1935. A black version of the model is displayed prominently in the much-publicized series of photographs taken upon the opening of Jean-Michel Frank’s showroom at 140 Rue du Faubourg-Saint-Honoré in Paris in 1935. The inclusion of an “Aigle” vase in this image, which depicts Alberto Giacometti, his brother, Diego, and some of Frank’s most important collaborators, is a testament to the importance of this form in both the eyes of the artist and his peers. The vase was even pictured opposite a model wearing Lanvin in a period photograph published in Vogue in 1935. This poetic work would inspire Giacometti to create similar pieces later on, including the “Colonne triangulaire et Oiseau” floor lamp in plaster (circa 1936) and a “Oiseau” bas relief (circa 1937), both displaying a strong stylistic resemblance with the present lot. Another version of this vase in plaster is held in the permanent collections of the Centre Pompidou in Paris.