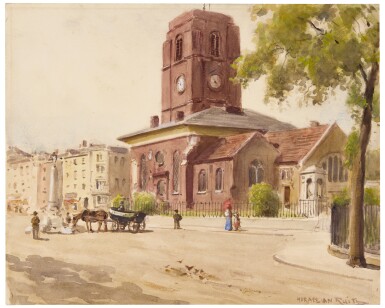 Watercolour on paper laid on board

Horace van Ruith specialised in landscapes, genre scenes and portraiture in both oil and watercolor. Although he was born in Capri, he subsequently settled in England, after spending several years working in Italy. He visited Bombay during the early 1880s and established a studio there. His paintings on India mostly portrayed the local people and captured their daily lives, from leisure activities to various trades. In 1886, he returned to London and partook in the Colonial and Indian Exhibition opened by Queen Victoria where he displayed a number of paintings with similar subjects. Her son, the Duke of Connaught, wrote of van Ruith in a letter to the Queen, stating that ‘no man understands the peculiar characteristics of Indian life better than he does and he is a very clever artist.’ (P. Rohatgi, P. Godrej and R. Mehrotra, Bombay to Mumbai: Changing Perspectives, Marg Publications, Mumbai, 1997, p. 153)

Horace Van Ruith is known to have painted the exterior and interior of Chelsea Old Church (depicted in the current painting), a number of times. His father-in-law was the vicar of the church