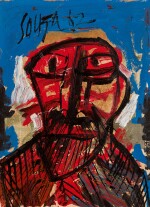 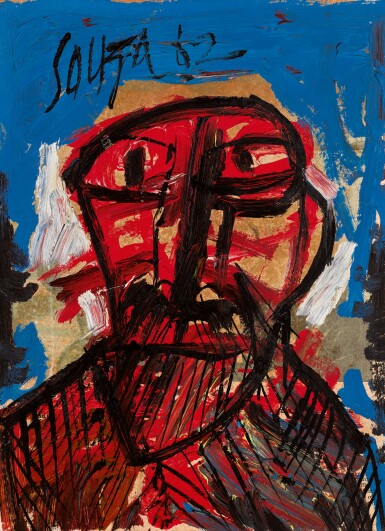 Oil on magazine paper laid on board

To request a condition report for this lot, please email Frances.Belsham@sothebys.com

Throughout his career, Francis Newton Souza remained tirelessly experimental. His bold portraits of the 1950s were characterised by thick cross-hatching lines. In the early 1960s, Souza’s heads were further distorted, resulting in complex mutated forms of which the present work is an excellent example. "I have created a new kind of face... I have drawn the physiognomy way beyond Picasso, in completely new terms. And I am still a figurative painter... [Picasso] stumped them and the whole of the western world into shambles. When you examine the face, the morphology, I am the only artist who has taken it a step further." (F. N. Souza quoted in Y. Dalmia, 'A Passion for the Human Figure', The Making of Modern Indian Art: The Progressives, Oxford University Press, New Delhi, 2001, p. 94) This self-made comparison to Picasso demonstrates Souza's determination to break new ground through his artistic style whilst nonetheless remaining within the boundaries of figurative art. The present work from 1962 likewise illustrates this commitment.

Untitled (Head) is formed of highly expressionistic and gestural brushstrokes. Souza’s bold and thick application of paint is set in contrast to the thin and delicate magazine paper on which it is painted. The impasto quality of the work evokes sculptural images in bas-relief. The head consists of geometrical blocks of colour enclosed by thick black contours; this bold style of portraiture brings to mind the heads of Jean-Michel Basquiat, painted two decades later. The primary colours of red and blue are contrasted with further splashes of white paint. This layering of paint demonstrates Souza's stunning mastery of line along with the emotional brute force with which he approached his works.