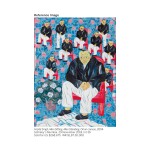 PROPERTY FROM A PRIVATE LONDON COLLECTION

PROPERTY FROM A PRIVATE LONDON COLLECTION

At first glance the paintings of Arpita Singh seem ‘to be an exercise in pure exuberance... Disparate elements are rendered in a brilliant candy-coloured palette and bring to mind memories of picture books from primary school. Yet the human figures that inhabit these fantastic spaces are worlds apart from childhood. With sombre countenances, sagging folds of flesh and furrowed brows, they are mature adults who wrestle with the looming threats of aging, illness, and abandonment. As we stand witness to their private burdens... the myth of the domestic sphere as a safe haven begins to unravel.' (Bose Pacia press release, Arpita Singh: Memory Jars, Bose Pacia, New York, 2003)

With its bright colours, childish scrawlings, dream-like perspective and curious figures, Counting Flowers: My Benares Saree is an archetypal example of Singh's artistic style. The painting is broadly separated into two planes of contrasting cyan and yellow, colours which are further juxtaposed with flashes of candy-floss pink. Singh's masterful handling of paint and colour is one of many reasons she is celebrated as a pre-eminent modernist painter. 'The sheer unctuosity of oil paint becomes an infinitely malleable substance in her hands; she caresses and cajoles it, moulding the brightly coloured pigment that has been squeezed directly on the canvas until it acquires a matte and yet faintly glistening sumptuosity. The lovingly anointed surfaces, their tactility, bespeak an artisan's love for her métier.' (D. Ananth, Arpita Singh, Penguin Books India and Vadehra Art Gallery, New Delhi, 2015, p. 41)

The painting deploys motifs which recur throughout Singh's œuvre. Firstly, the painted numbers, at once ordered and haphazard. Secondly, the seated man with earnest face, who in this work sits suspended atop the childish numbered backdrop. Thirdly, the contorted nude woman. She floats uncomfortably at the top of the canvas, and the bright ochre of her form is sharply contrasted by the blue background. 'There is always, again and again, the gesture of collapse, the prone figure, someone felled, someone in an epileptic faint, someone mimicking death.' (G. Kapur, 'Body as Gesture', When Was Modernism: Essays on Contemporary Cultural Practice in India, Tulika, New Delhi, 2000, p. 48)

The seated man and prostrate woman are joined by an upright man in a black jacket, who hurriedly walks above the plane of numbers. The three figures are all separated by their differing poses and the flat perspective of the painting; they appear to be in their own world, busy with their own concerns.

Counting Flowers: My Benares Saree, both beautifully executed and emotively charged, is testament to the genius of Arpita Singh's artistic practice.