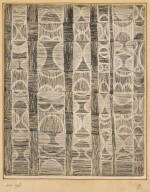 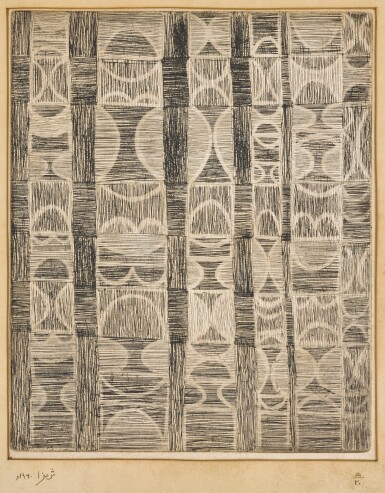 PROPERTY FROM A PRIVATE COLLECTION, AUSTRALIA

PROPERTY FROM A PRIVATE COLLECTION, AUSTRALIA

Signed, dated and editioned in Urdu on the mount

Acquired directly from the artist by Major General Syed Wajahat Hussain, circa 1960s

'Although Anwar Jalal Shemza belongs to that generation of artists who arrived here in the 50s and who had already established themselves in their countries of origin, his experience in Britain led him to an entirely different direction to his contemporaries. But his experience was not unique. Almost every Afro-Asian artist must have his or her own story to tell: how their dreams and aspirations were shattered, how they had to recover their confidence in themselves, their identity as human beings and as artists; and how the memory of their own cultures played an important role in this recovery.' (R. Araeen, 'The Other Story', cited in J. Holt, 'Anwar Jalal Shemza: A Search for the 'Significant'', Third Text, Volume 12, Issue 42, 1998, p. 104)

In 1956, Anwar Jalal Shemza left Pakistan to study at the Slade School of Fine Art in London. Prior to this he had trained at the Mayo School of Art in Lahore in the 1940s and had founded the Lahore Art Circle in 1952, along with artists such as Ahmed Parvez and Syed Ali Imam.

Following his time in London, Shemza sought his own distinctive voice. He was initially influenced by western Modernists such as Paul Klee and Piet Mondrian, but his later works incorporated traditional Islamic influences of architectural shapes and geometry. Over the subsequent twenty-five years, his painting and graphic work covered a broad range of ideas, including explorations of Roman letters, formal arrangements of circles, squares and chessboard figures as well as 'pages' of lines inspired by Arabic and Persian calligraphy.

'[Shemza's] paintings derive equally from the rhythmical space-filling patterns of the rug and from the 'growing line' of modern western art. His pictures are not mere patterns and images, and their forms, whether painted or drawn, invest the surface with a mysterious life.' (A. Forge quoted in Holt, 'Anwar Jalal Shemza: A Search for the 'Significant'', p. 107)

In the 1960s, Shemza was part of the triumvirate of artists from the subcontinent (along with Francis Newton Souza and Avinash Chandra) who showed together at Victor Musgrave's influential Gallery One in London. Shemza was well respected in London's critical circles, with notable one-man exhibitions at New Vision Centre (1959), Gallery One (1960), Durham's Gulbenkian Museum (1963) and Oxford's Ashmolean Museum (1964). Lots 101 and 102, from 1959 and 1960 respectively, are from this period of critical acclaim for Shemza and both depict visual motifs that continually recurred in the artist's career, namely a geometric grid of the Roman letters B and D. In particular, the style of lot 1 has been compared to the carvings seen on the marble screens of the Sheesh Mahal at the 17th-century Lahore Fort. (A. Jhaveri, South Asian Modernists 1953-63 Exhibition Guide, The Whitworth, Manchester, unpaginated)