PROPERTY FROM A PRIVATE EUROPEAN COLLECTION 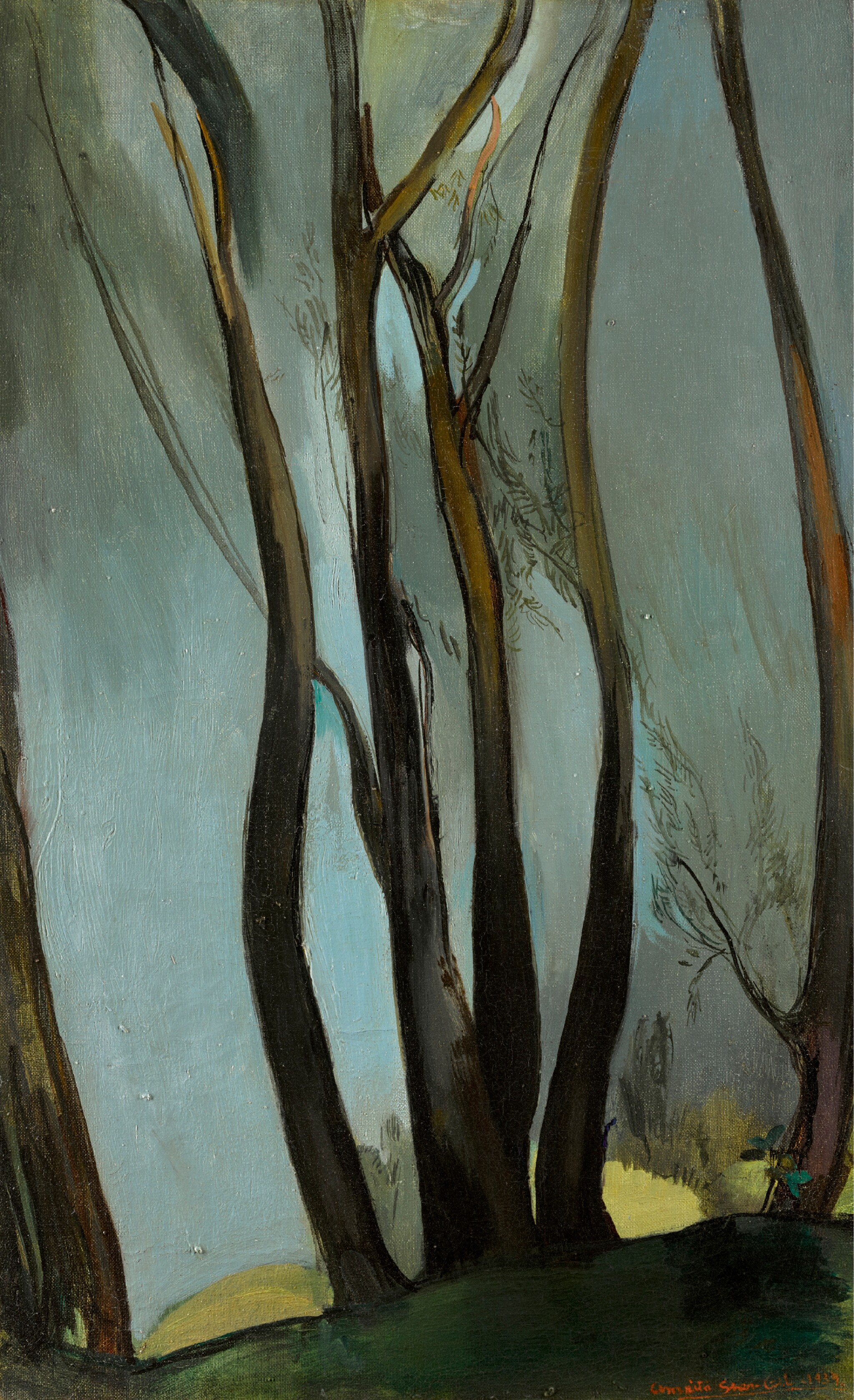 PROPERTY FROM A PRIVATE EUROPEAN COLLECTION

Acquired directly from the artist by László Urbach and Rózsi Urbach, 1939

‘Some Indians especially in her lifetime, before she was recognised universally, blamed her for being too western; others including her chief biographer, contest that she was utterly Indian. These completely opposite views just prove that she was neither Western in the extreme nor Indian; she was actually a perfect blending of the two artistic traditions (and of the two civilisations). Nothing European could possibly have been alien to her, for she was half European; almost all her upbringing was Western. And nothing Indian could possibly have been alien to her either, for she was the daughter of an Indian, she lived in India, worked in India and adored India. As late as 1939, when she had already developed her latest and most mature Indian style, she was able to paint, during a visit to her native Hungary, such superb masterpieces... Anyone familiar with Hungarian painting must include these among its masterpieces...’. (C. Fabri, ‘Amrita Sher-Gil,’ in G. Wojtilla (ed.), Amrita Sher-Gil and Hungary, Hungarian Information and Cultural Centre and Allied Publishers Pvt. Ltd., New Delhi, 1981, p. 65)

Amrita Sher-Gil had profound ties to Hungary. Born in Budapest in 1913, her mother was a Hungarian Jewish opera singer and her father an Indian Sikh aristocrat and scholar. Her maternal uncle Ervin Baktay was a noted Indologist who encouraged Sher-Gil's talent. She spent almost one third of her short life in Hungary, living there for her first eight years and returning during her late teens and early twenties. She grew up on Hungarian fables and folk songs and spoke Magyar as her mother tongue. Many summers of her youth and student years (1929 – 1934) were spent in Zebegény, a summer resort village and artist enclave on the Danube, where her maternal aunt had a country home. It was here Amrita first became close to Viola and Victor Egan, her first cousins from her third maternal aunt. During Sher-Gil's childhood, the families entertained themselves and their friends camping on Lake Balaton, along with the Urbach family, who would later become the owners of Sher-Gil's painting Trees (lot 116).

Sher-Gil’s Hungarian pictures amount to around one-third of her entire corpus and can be divided into two groups – those from visits during her student years in Paris between 1929 and 1934 and those connected with her marriage to Victor Egan in 1938. Hungarian art historian, Katalin Keserü notes, ‘The earlier works can be examined according to thematic genres; however, in the penetrating subjectivity of the later ones, genres overlap, styles and genres mingle – Amrita’s individual world comes into being.’ (K. Keserü, ‘Amrita Sher-Gil: The Indian Painter and her French and Hungarian Connections,’ in Y. Dalmia (ed.), Amrita Sher-Gil: Art & Life, Oxford University Press, New Delhi, 2014, p. 90)

During Sher-Gil’s first period of Hungarian painting – 1929-1934 – she was primarily occupied with painting self-portraits and portraits of friends and family. It was also during this time that the artist is first documented to have painted en plein air (outdoors). Plein-air painting opposed academic training and encouraged a freer mode of interpreting light and shade. Sher-Gil was introduced to this style by a pupil of the founder of the Nagybánya School, Simon Hollósy. ‘His followers tended to paint outdoors, capturing the simplicity of rural life and reflecting on the changing light on their canvases’. (Y. Dalmia, Amrita Sher-Gil: A Life, Viking/Penguin Group, New Delhi, 2006, p. 195)

Amrita wrote to her mother in the summer of 1932 of her preoccupation with painting all day long, referring to her plein-air painting Hungarian Gypsy Girl (1932). It was in this context that Amrita was faced with questions such as the openness of landscape, and questions of composition which were different to those she faced while painting portraits in ateliers. (K. Keserü, ‘Amrita Sher-Gil: The Indian Painter and her French and Hungarian Connections,’ Amrita Sher-Gil: Art & Life, Y. Dalmia ed., Oxford University Press, New Delhi, 2014, p. 91) Other works from this period include Church in Zebegeny (1932), Open Air Painters (1933) and View from Studio (1934). These paintings are characterised by loose brushwork and painterliness within a compact composition.

After a tumultuous series of romances throughout her youth and a broken engagement, Sher-Gil settled down for marriage with her cousin Victor in 1938. Between June 1938 and July 1939, Sher-Gil lived between Kiskunhalas and Lake Balaton where Egan was stationed to perform his military duty as a doctor. During this period back in Hungary, she painted some of her most well-known and mature works including Hungarian Village Market (1938), In the Garden (1938), Potato Peeler (1938), The Merry Cemetery (1939), Winter (1939), Female Torso (1939), Two Girls (1939), and the current lot Trees (1939). By this time, Sher-Gil had amalgamated not only what she had learned as a student in France but also what she had imbibed in India, where she had already created some of her most well-known masterpieces.

Trees, painted in 1939 and executed with artistic maturity, is a charming example of the universal appeal of Sher-Gil's œuvre. There is something strange and yet inviting about the painting. It is as if the viewer is walking among the trees, the trunks of which are dark, slender and largely without branches or leaves. The backdrop is a hazy grey blue sky. There is an enticing patch of yellow green at the bottom which gives the painting depth and is also suggestive of a clearing beyond. The brushstrokes are loose and painterly, reminiscent of her plein-air paintings executed in her first Hungarian period.

View from Studio (1934), in which a bifurcating largely leafless tree trunk shoots upwards against a courtyard block in Paris, can be considered as a prelude to Trees. In fact, Keserü considers the two works to be pendant paintings. (K. Keserü, Amrita Sher-Gil and Erno Baktay, http://www.delhi.balassiintezet.hu, 10 June 2013)

Bare trees also feature in the paintings Sher-Gil executed in India before her arrival in Hungary in June 1938. Moreover, one continues to see trees being a significant part of her compositions in her second Hungarian oeuvre, in works such as Hungarian Church Steeple (1938), Hungarian Village Market, In the Garden, or The Merry Cemetery.

Trees hold both compositional and symbolic importance, as evidenced in paintings by Vincent Van Gogh and the Hungarian artist Tivadar Csontváry Kosztka. While in the Eastern tradition, trees are considered in the context of the tree of life, in the Western tradition trees are seen to assume personalities. Van Gogh painted trees which represented himself and Csontváry Kosztka's trees were associated with a universal life experience. (K. Keserü, ‘Amrita Sher-Gil: The Indian Painter and Her French and Hungarian Connections,’ p. 105) Along a similar vein, Keserü suggests that Trees presents a portrait of Sher-Gil’s inner feelings. ‘In Merry Cemetery the springtime surrounding of nature renewing itself, the trees towering like dark poles behind the Stations of the Cross might just as well be the shouting witnesses of the suffering of Jesus as universal signs of disaster, but above all they are the expressions of Amrita’s life experience, embracing both meanings…..Finally in front of the grey-blue background of Trees, on the edge of the deep we can only guess at, thin trunks snake their way like protracted cries of pain, with altogether only one little branch full of life and a few ethereally leafy branches, a detail reminiscent of the tree stump of Csontvary’s Lonely Cedar for its colour too as well as the yellow patch evoking light, of a triangular little clearing appearing at the foot of the tree, the enchanting subtlety and directness of the painting method, which allows the paint to become lumpy in places-together these are the elements of Amrita’s landscape-self portrait.’ (K. Keserü, ‘Amrita Sher-Gil: The Indian Painter and her French and Hungarian Connections,’ Amrita Sher-Gil: Art & Life, edited by Y. Dalmia, Oxford University Press, New Delhi, 2014, p.105-6)

It is intriguing to consider the flash of yellow in Trees, in the context of Sher-Gil's ascription of colours to people’s shadows. She wrote in a letter to Egan in 1935, “The white man’s shadow is bluish-purple, while the Hindu has golden green shadow. Mine is yellow. Van Gogh was told that yellow is the favourite colour of the Gods and that is right.” (Y. Dalmia, Amrita Sher-Gil: A Life, Viking/Penguin Group, New Delhi, 2006, p. 53) Keserü believes that Sher-Gil references herself through the colour yellow in the present work. (K. Keserü, Amrita Sher-Gil and Erno Baktay, http://www.delhi.balassiintezet.hu, 10 June 2013) Aside from this hint to the shadow of Sher-Gil, the scene is absent of human figures. The sense of isolation which pervades this painting executed in Hungary, stands in opposition to the images in Sher-Gil’s family archive, which depict the artist, Egan and various family members at play and leisure in the Hungarian countryside. It mirrors her own psychological underpinnings as she is finding her bearings as a new wife and developing as an artist. In one sense, Trees could be seen as an interior self-portrait as its contemplative and expressionistic brushwork reflects her time in Zebegény. This was a period of intense reflection for Sher-Gil and a time marked by notable transitions in her life and art.

While much has been written about the œuvre of Sher-Gil, painted within her short life (1913 – 1941), her works from her Hungarian period are lesser known, so adding to the desirability of this work. Sher-Gil has been declared an Indian National Treasure. This evocative landscape is one of the rare opportunities for collectors to acquire a work painted by Sher-Gil that is outside of India and in free circulation. Thus far only 6 works have ever appeared for auction on the international market and only 10 works are known outside of India.

The painting was purchased by László and Rózsi Urbach directly from Sher-Gil in 1939. László was Hungarian motorcycle and motorboating champion, photographer and filmmaker. The couple had several friends who were writers and artists, one of whom was Sher-Gil. They spent a lot of time with the artist, her uncle Baktay and her step-uncle Ernő Gottesmann. László and Rózsi Urbach purchased the painting as a memento of their excursions and friendship with Sher-Gil, and according to Rózsi, the artist considered the work her 'farewell to Europe' (Correspondence with current owner, April 2019). The year Trees was painted, Sher-Gil moved to India never to return to Hungary, her place of birth and a country of much artistic inspiration.