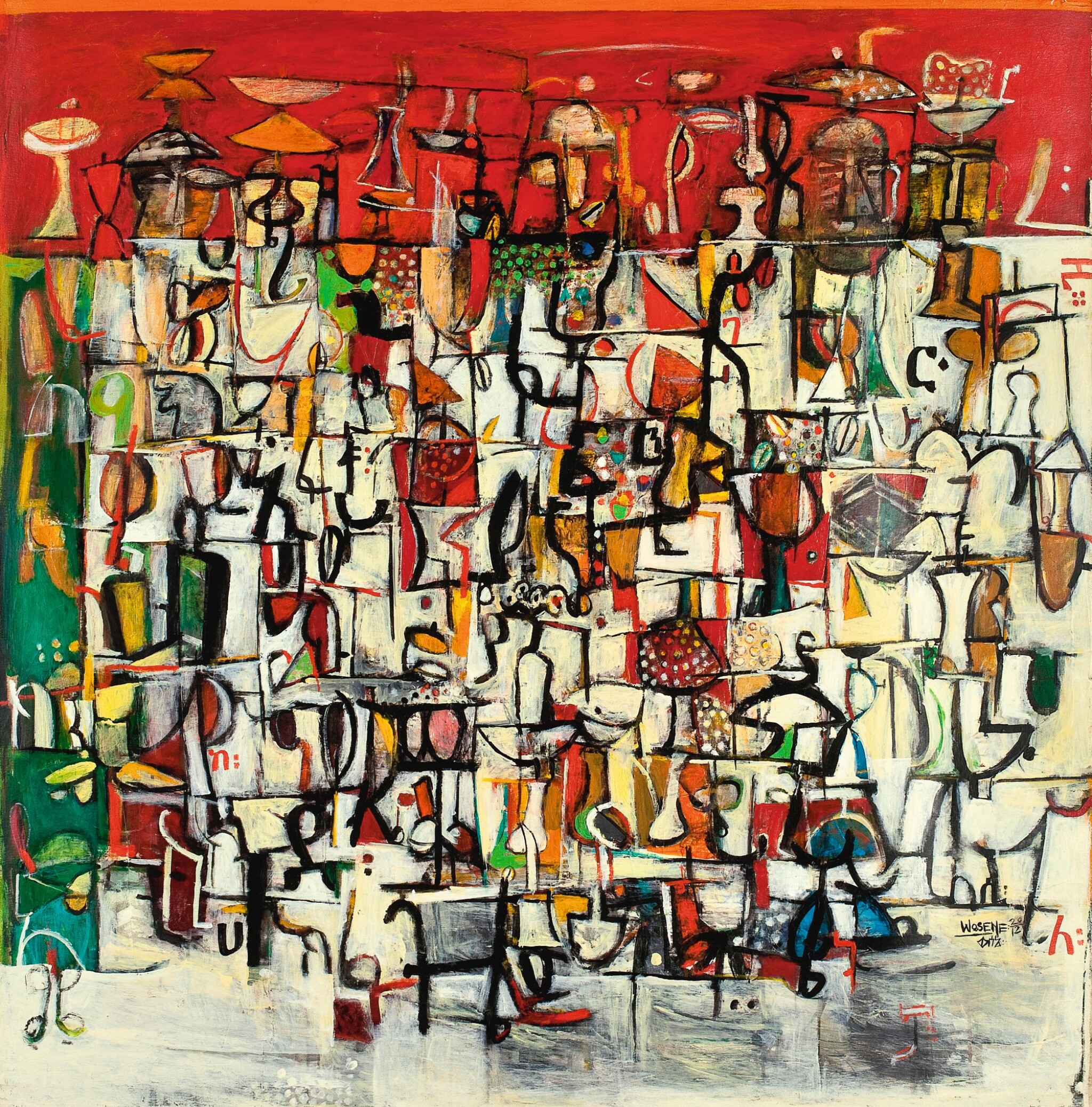 Very light stretcher marks in places. Overall the work appears to be in excellent condition.

Inspection under UV Light reveals no signs of restoration or repair.

Please telephone the department on +44 (0) 207 293 6323 or email enahoro.ohiomabelo@sothebys.com if you have any questions about the present work.

For more than four decades, Wosene (his professional name) has probed, burrowed into, and sifted through the script forms of Amharic, the ancient language of his native Ethiopia, to create paintings that, while having a language system at their core, move far beyond literal words into a unique visual narrative.

Traditional Ethiopian icon paintings were an early influence, in which a canvas is partitioned into two levels – the upper level portraying the icon image, the lower, a text describing or referring to that image. However, already as an undergraduate art student in the early 1970s, Wosene began ‘discarding’ the iconic images and focusing on the play of script forms.

Roots of Words III, a classic painting and central work in Wosene’s “WordPlay” series (2008-present) portrays not only his fascination with Amharic script, but visually documents elements in his painting process, displays the strong influence of jazz music on his process and content, and most important, pays homage to the source of his artistry as an Ethiopian-born painter.

The bold red upper section of the painting vibrates energetically and grounds the composition. The white background in the central body of the work provides a close look at the ways in which teeming script forms spawn innovative patterns, configurations, and symbols that intrigue the viewer to move into the work and discover what is being “written” with color and form.

The open space at the bottom of the painting, in which the artist breaks with Western conventions of creating a solid ‘ground’ at the base of compositions, suggests the artist’s sense of the mysterious source of language, that which is unknown or unspoken and is the mainspring of his visual ‘wordplay’ – that place where ‘roots’ take hold.

“…The script is my inspiration. In the various settings of my daily life, I’m constantly taking in shapes, colors, movements, rhythms. In short, I’m always at work, even when I’m not in the studio with brush in hand. When I am in the studio, I begin with fear – fear of that mysterious space of the unknown, and fear that nothing will come to fill the blank canvas tacked on the wall in front of me. Though I have the shadow of a painting in my head, I don’t sketch beforehand. Instead, I give myself over to a process that is inchoate and exploratory, an interplay of accident and intention, of curiosity and discovery.”

“…While painting, I enter into an intense dialogue with the script images that begin to surface on the canvas. I probe their versatility and the playfulness of their surfaces and interiors, dissecting their skeletal structures, and observe how they move, interact, and intersect. I hear them speaking to each other as I elongate, distort, and invert them. Using fast-drying acrylic paint, I can respond quickly to what I’m “hearing” on the canvas; I quickly build and destroy and find resolution. On canvas, the script images become divested of literal meaning and become instead gesture, dance, music – ciphers for the human drama.”

Jazz music has also long exerted a major influence on Wosene’s work, as he describes:

“…Since my student years at the School of Fine Art in Addis Ababa (1967-1972), American jazz has asserted a significant influence on my painting. Like jazz music, the script provides a repertoire of dense, yet supple, elements that lend themselves well to visual improvisation. Jazz also influences my sense of composition: like improvisational music, the language symbols can be juxtaposed on canvas in nonverbal ‘word-plays’ to create a visual language of form and color, rhythm and movement.”

Wosene, a master of color, is the first Ethiopian-born artist to give new life to this ancient script in contemporary art, and this innovative use of language in his series WordPlay is now globally recognized as his artistic signature. His works are in many international corporate, private collections, as well as in permanent museum collections, among them: The National Museum of Ethiopia (Addis Ababa), Smithsonian National Museum of African Art (Washington, DC), Virginia Museum of Fine Art (Richmond), The Newark Museum (New Jersey), Neuberger Museum (Purchase, NY), Birmingham Museum of Art (Alabama), North Carolina Museum (Raleigh), Fowler Museum (UCLA, Los Angeles), Indianapolis Museum of Art, (Indiana).