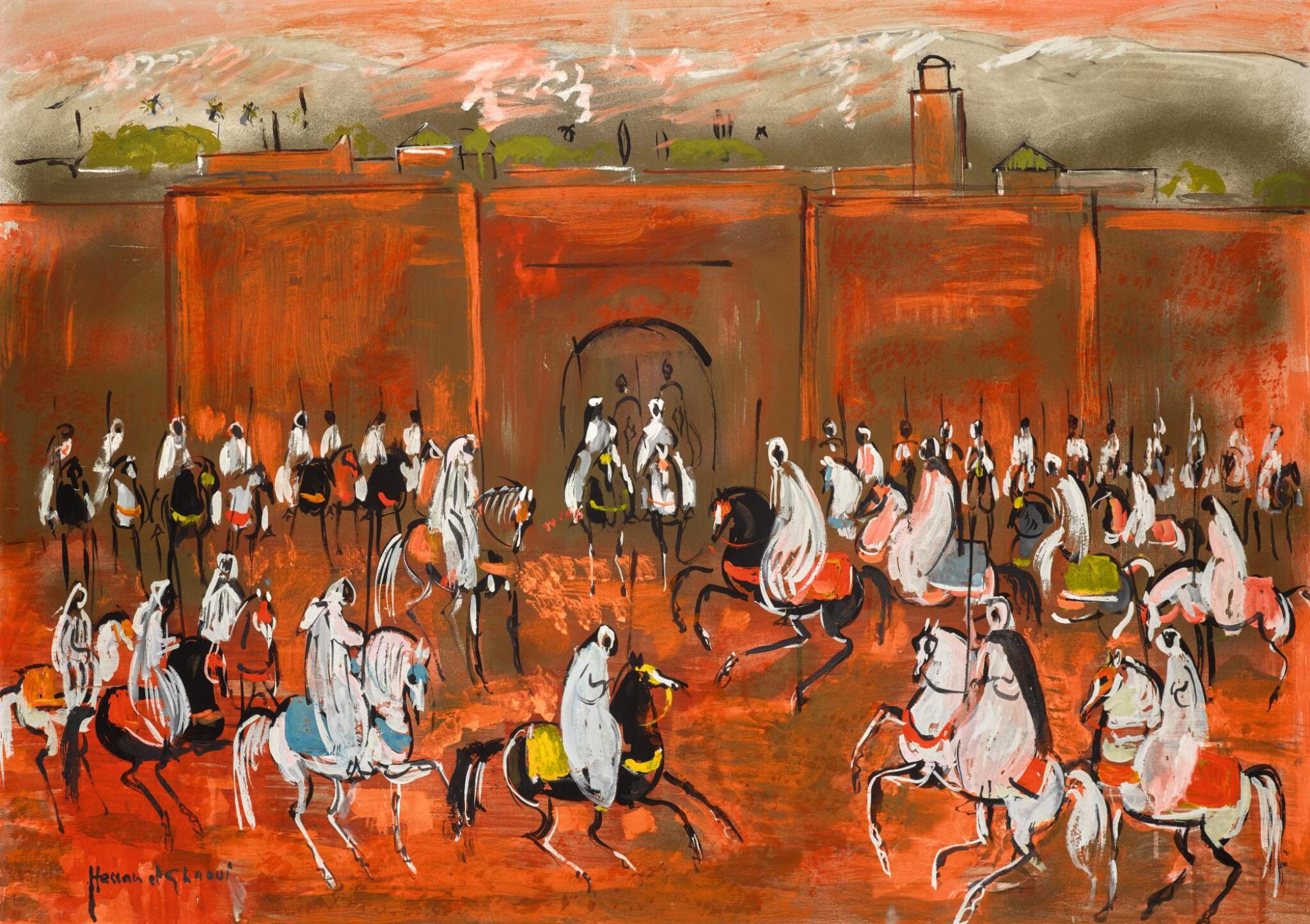 gouache on card adhered to board

Light scratches in places. Light warping to the paper within the upper half of the work. Card is adhered to board but top two corners have become unglued. This excepting, the work appears to be in excellent condition.

This work is framed.

Colours are true to the catalogue illustration.

Please telephone the department on +44 (0) 207 293 6323 or email enahoro.ohiomabelo@sothebys.com if you have any questions regarding the present work.

Gifted by the above to a Private Collection

Hassan El Glaoui is perhaps the most important and influential artist from Morocco. Born in 1924 into a prominent Moroccan family, he was the son of the last Pasha of Marrakech, Thami El Glaoui ‘The Lord of the Atlas’. Thami El Glaoui often entertained official delegations from across the world, delighting them with opulent banquets adjoined with Moroccan dancers and musicians. A prominent guest in the El Glaoui household was British Statesman Sir Winston Churchill, who would visit Morocco to paint and write books. Churchill’s presence in the El Glaoui household resulted in him crossing paths with, then, young Hassan. Recognising his passion for the arts and talent for painting, Churchill urged his friend, to allow his son to pursue a career in the arts.

Churchill’s espousing plea led Hassan El Glaoui to study fine art full-time at the Ecole des Beaux Arts in Paris. There is no doubt that this unlikely relationship between Churchill and Hassan El Glaoui played a significant role in both of their artistic endeavours. Churchill was very inspired by Moroccan landscapes and often featured mosques and local street scenes of the ‘ochre city’ in his works. The exhibition Meetings in Marrakech, at Leighton House London in 2012, tells the unexpected story of their friendship portrayed alongside celebrated works of both Hassan El Glaoui and Winston Churchill.

A gift of a pony from his father at the age of ten instilled a passion for horses in the young Hassan, he would have witnessed his father on horseback on numerous occasions. In conjunction with horse riding experiences in his formative years, the ‘Tbourida’ or ‘Fantasia’ tradition, popular amongst the Berbers of Morocco, would come to play a major part in his artistic practice – representing them in all their majesty in numerous works. The Tbourida is an ancient tradition practiced in the Maghreb region, involving men on horseback, riding and firing old muskets in a synchronised fashion. This spectacle is commonly exhibited during monarchical and cultural celebrations. The ‘Tbourida’ tradition of the Berber people is captured in Fantasia Horsemen, as he depicts figures dressed in traditional clothing, with their muskets being readied to be fired and the movements of the horses with reverent grace. El Glaoui offers in his work an unadulterated vision of his home, his paintings are sincere snapshots of the traditions of his people.

The present lot once belonged to Hubert de Givenchy (1927-2018), a close personal friend of the artist and his model wife, Christine Legendre, who had walked for the celebrated designer in the 1950s. Hassan El Glaoui’s works have been exhibited extensively across the globe, notably at Gallerie André Weill, Paris (1950), Wildenstain, New York (1951), Galerie Petrides, Paris (1959), Hammer Galleries, New York (1967, 1969), Galerie Isy Brachot, Brussels (1969) and Tyron Gallery, London (1969), amongst others. His works are included in numerous prestigious collections such as the Royal Palace Collection in Fez and the Parliament Collection in Rabat. In April 2019, an exhibition of El Glaoui’s work, produced during his years in Paris, opened at the Mohammed VI Museum of Modern and Contemporary Art, Rabat. Throughout his long career, Hassan El Glaoui received international praise and is widely celebrated as one of Morocco’s most revered artists and a pioneer of contemporary art.