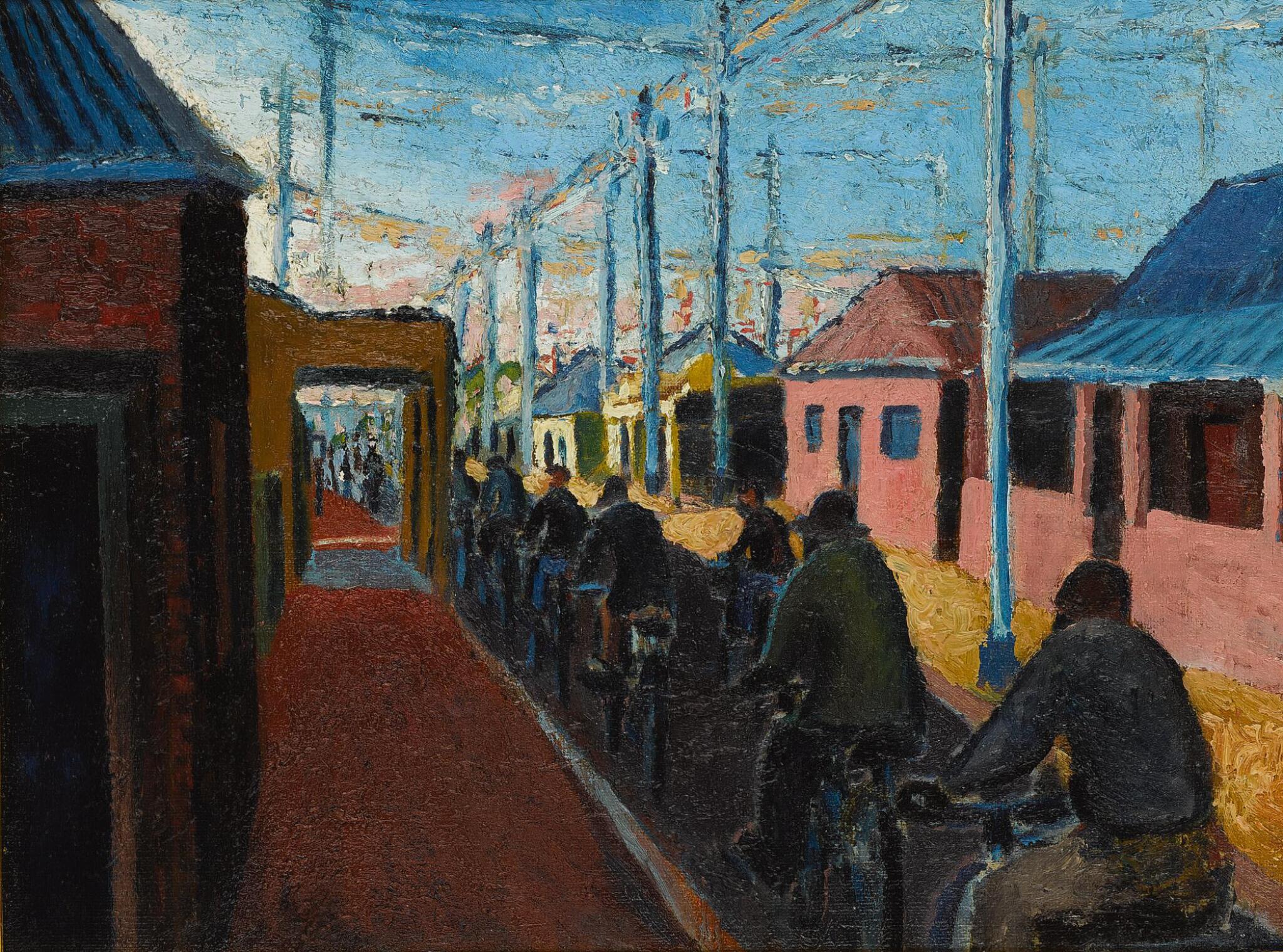 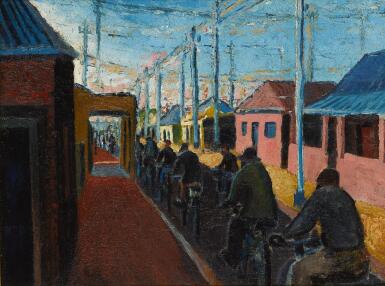 The work is framed but not glazed. The board is in good stable order and is providing a sound support. Impasto is good. One white pindot accretion along left edge, near top corner. Minor wear to pigment near top right corner along right framing edge. Examination under ultraviolet light reveals no evidence of any retouching or restoration. Overall the work appears to be in excellent condition.

Colours are true to catalogue illustration.

Sekoto’s rural upbringing in the Lutheran Mission Station in Botshabelo and periods of residence in Johannesburg, Cape Town and Pretoria provided the artist with a unique perspective on the people of South Africa, and primarily the impoverished black population, at a time of dramatic social change. In the years immediately preceding the formal implementation of apartheid, Sekoto’s depictions of life’s daily struggles underline the economic hardship as well as the social tensions and racial injustice faced by millions of black South Africans, the reverberations of which continue today.

Initially following in his father’s footsteps, Gerard Sekoto had trained as a school teacher in rural Limpopo before deciding to pursue a professional art career, inspired in part by his colleague Ernest Mancoba and their mutual appreciation of Vincent Van Gogh. In 1939 he travelled to Johannesburg to live with cousins in Gerty Street, Sophiatown. Their nephew Fred Norman invited Sekoto to accompany him to St Peter's School in Rosettenville, where one of the teachers, Brother Roger Castle, recognised Sekoto's talent and encouraged him to attend art classes there. Brother Roger facilitated several introductions for the young Sekoto, including to artists Alexis Preller and Judith Gluckman, who taught him how to paint with oils, and Joan Ginsberg, the owner of the Gainsborough Galleries; he also encouraged the artist to submit works to the prestigious South African Academy exhibition in 1939. During this period Sekoto also exhibited in group shows at the commercial Gainsborough Gallery in May 1939 and June 1940 as well as the subsequent Academy Exhibitions of 1940, 1941 and 1942. His work was well received by the press, with the Rand Daily Mail commenting on Sekoto's affinity to the 'moderns', particularly the French school".

Everyday life in Sophiatown provided Sekoto with inspiration for his work. One of several paintings on the subject of transportation, Cyclists in Sophiatown illustrates a line of men commuting to work by bicycle, leaving the township under a transient early morning sun. The average black worker left home at six o’clock in the morning and would return at six in the evening, leaving little time for socialising or leisure activities. Car ownership among black South Africans was negligible, and the prohibitive costs and the lack of public transport meant cycling was the default, and therefore low-status, mode of transport for the poor and oppressed black working-class South Africans. Yellow houses – a Street in Sophiatown, also painted in 1940 and famously purchased by the Johannesburg Art Gallery as the first work by a black artist in their collection (and the only one for the next 32 years), could be considered a pendant piece for the current lot. Yellow Houses depicts afternoon in Sophiatown, when the workers are still away in the city; a lone cyclist is just seen coming into view, but the streets are largely deserted, and any activity is likely illicit and hidden indoors, in the shebeen behind those yellow walls.

In Cyclists in Sophiatown, Sekoto’s use of colour is both sensitive and intuitive, catching the effect of a cool and crisp early morning sunlight on the cyclists, which results in the scene to be permeated and infused with radiant colours that bounce off each other. His treatment of natural light in this work contrasts with his usual practice of favouring a bright and effusive light source. Both Cyclists in Sophiatown and Yellow Houses mark further stylistic shifts in Sekoto’s oeuvre. They differ from many of Sekoto’s other Sophiatown paintings in their focus on place over people, and the structure of both scenes is more sophisticated; the artist’s use of strong diagonals leads the eye into the distance, mimicked by the pattern and rhythm of the corrugated iron roof sheets, allowing him to interrupt the picture plane and dictate the focus of the viewer.

Cyclists in Sophiatown is also a notable precursor to Sekoto’s seminal and most celebrated work Song of the Pick. It provides a blueprint for the later work, in its astute composition and use of light and colour to convey a sharp political message. Painted during Sekoto’s period in Eastwood, Song of the Pick is Sekoto’s most charged and political painting; the artist depicts nine black field labourers being monitored by a white supervisor. The painting is clearly based on Andrew Goldie’s poignant black and white photograph of the same subject, a copy of which remained in Sekoto’s possession for the rest of his life. Both works share a rhythmic composition, further reinforced and achieved through the repetition and synergism in both the activities of the figures represented. The positioning of figures in Sekoto’s Song of the Pick mirrors that of Cyclists in Sophiatown, primarily in their diagonal and angular arrangement. Conversely, in the tightly framed composition of Song of the Pick, the black labourers appear in a position of strength, with their harmonised and free-swinging axes, compared to the white guard who stands alone. Individual faces cannot be seen in either painting; they represent the faceless masses of black people in a segregated South Africa.

Through such complex subject matter, Sekoto creates empathy for the ordinary people in South Africa. These three masterpieces: Cyclists in Sophiatown; Yellow houses – a Street in Sophiatown; and Song of the Pick, perfectly exemplify the artist’s mastery of colour, composition and subject matter, yet, are also historically poignant images in line with Sekoto’s longstanding quest to document images of society in South Africa. They aptly disseminate the day to day struggles of black South Africans in the 1940s, and represent a painterly attempt to awaken their consciousness and galvanise them to demand a better life to the one which they were being subjected. They are the epitomes of the type of social-realism for which Sekoto was best known.

In 1942 the commercial success of an exhibition at the Gainsborough Gallery allowed Sekoto to realise one of his dreams, to visit the city of Cape Town. He lived in District Six and enjoyed further success before moving in with his mother in Eastwood, Pretoria, in 1945, as part of his long-term plan to travel to France. In 1947 Sekoto left South Africa in exile for Paris, never to return. The following year, the National Party won the South African general election and began to implement their program of apartheid. In 1950, they passed the Group Areas Act which designated specific areas for particular race groups, resulting in the forced removal of the black residents of Sophiatown, District Six and Eastwood in the following years. Sekoto followed these developments in exile in Paris, where he would return to the subject of cyclists repeatedly in his “memory” series. Cyclists in Sophiatown thus acts as a visual reminder of the Johannesburg suburb that Sekoto once called home, and indeed his whole body of pre-exile paintings remain as vivid historical records of these vibrant urban environments and the people who lived there.

Sekoto's position as one of South Africa's first and most important modernists was cemented by a survey exhibition of his work at the Johannesburg Art Gallery and an honorary doctorate from the University of Witwatersrand in 1989, the seminal retrospective Song for Sekoto 1913-2013 at Wits Art Museum celebrating his centenary year, and the presence of his work in major public collections including the Smithsonian’s National Museum of African Art in Washington D.C. and Iziko South African National Gallery in Cape Town. Sekoto passed away in Paris in 1993; apartheid would remain in place until 1994, when Nelson Mandela and the Africa National Congress gained power in the country’s first truly democratic election. Sophiatown still exists; after the forced removals and demolition in the 1950s, the area was rezoned for whites only and renamed Triomf (Triumph in Afrikaans), only for the ANC government to reinstate its old name in 2006. The original parish church of Christ the King still stands, and descendants of these cyclists still worship there.

We are grateful to Barbara Lindop for her assistance in cataloguing this lot.