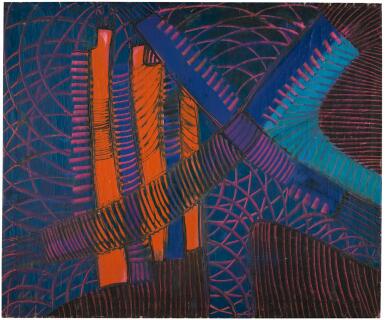 The central stretcher bar has been repaired. The work is poorly stretched and would benefit from being re stretched. There appears to be extensive cracking, flaking, and loss across the work's surface as well as along all four framing edges. There are rips to the canvas within the upper left and lower right corners of the work. There are numerous repaired tears throughout the work, the largest measuring approximately 150 mm long (vertical) and is located at the center of the work. There are also several areas throughout the work where the canvas seems to have been scratched and a tear seems imminent. The work would benefit from restoration.

Colours are true to catalogue illustration.

Acquired from the above by the present owner in 2001

Bertina Lopes is a Mozambican painter and sculptor whose work highlighted the social criticism and nationalistic fervour that influenced other Mozambican artists of her time. She was born in the capital of Mozambique, Lourenço Marques, today Maputo. The daughter of a Portuguese father and African mother, she left Mozambique early in her life to study art in Lisbon. Her travels to Portugal led her to meet other key Portuguese artists, such as expressionist Carlos Botelho and surrealist Marcelino Macedo Vespeira. Bertina was inspired by and engaged with the Avant-garde painting of Portuguese Modernism. It was there that she was able to view exhibitions of a diverse range of artists from South American graffiti to Western painters.

Lopes returned to Mozambique in 1953 and taught in a technical school. During this period of her life, cultural nationalism, embodied by the poets José Craveirinha and Noémia de Sousa, became a significant influence ideologically and artistically. Much of her work featured African fairy-tales and stories along with political events occurring at the time.

Lopes travelled back to Portugal with a scholarship to study ceramics; however, her nationalist attitude was met with persecution by the PIDE (Portuguese International and State Defence police). Lopes decided to move to Rome, Italy in 1963 where she lived the rest of her life. The subjects of African fairy-tales took on a new meaning during this period; they expressed a force of opposition and desire for independence. The work she produced from 1970 through to the 1980s exudes nostalgia for her homeland of Mozambique.

Bertina Lopes achieved significant recognition and received numerous awards and prizes. She won an award from the International Centre for Mediterranean Art and Culture in 1975 and the Grand Prix d’Honneur from the European Union of Art Critics in 1988, to name a few.