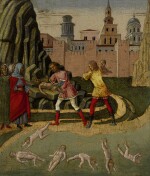 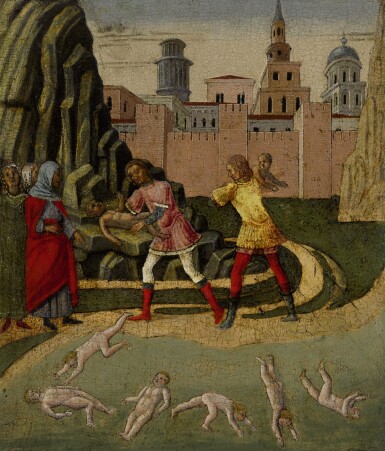 WORKSHOP OF THE MASTER OF THE CORRER PHAETHON

MASSACRE OF THE INNOCENTS

oil and tempera on panel

The Master of the Correr Phaethon is an anonymous Veronese painter of cassoni and decorative furniture panels named by Mattia Vinco for a medallion panel depicting Phaethon asking Apollo to drive the chariot of the sun held in the Correr Museum, Venice.1 His work was first isolated and attributed to Francesco dai Libri by Bernard Berenson, who connected a lost series of panels depicting episodes from the myth of Meleager and the Meeting of Aeneas and Aphrodite in Africa (Louvre, Paris).2 Vinco notes that the anonymous master is stylistically linked to Francesco Morone, Girolamo dai Libri, and Michele da Verona, but a possible identity is one of the children of Antonio II Badile, all of whom were painters but with no known extant works: Bartolomeo III, Francesco II, and Pietro Paolo Badile. The master's secular works tend to employ unusual and inventive iconography, and such seems to be the case in this religious scene as well. The Massacre of the Innocents is typically shown as a struggle between soldiers and parents for their children, but here the soldiers methodically execute the children and throw them into the nearby river.

The thickness of the present panel (which is original) as well as the vertical wood grain suggest that this was not a cassone but rather could have been a door to a cabinet or tabernacle.

We are grateful to Dr. Mattia Vinco for suggesting an attribution to the Workshop of the Master of the Correr Phaethon.