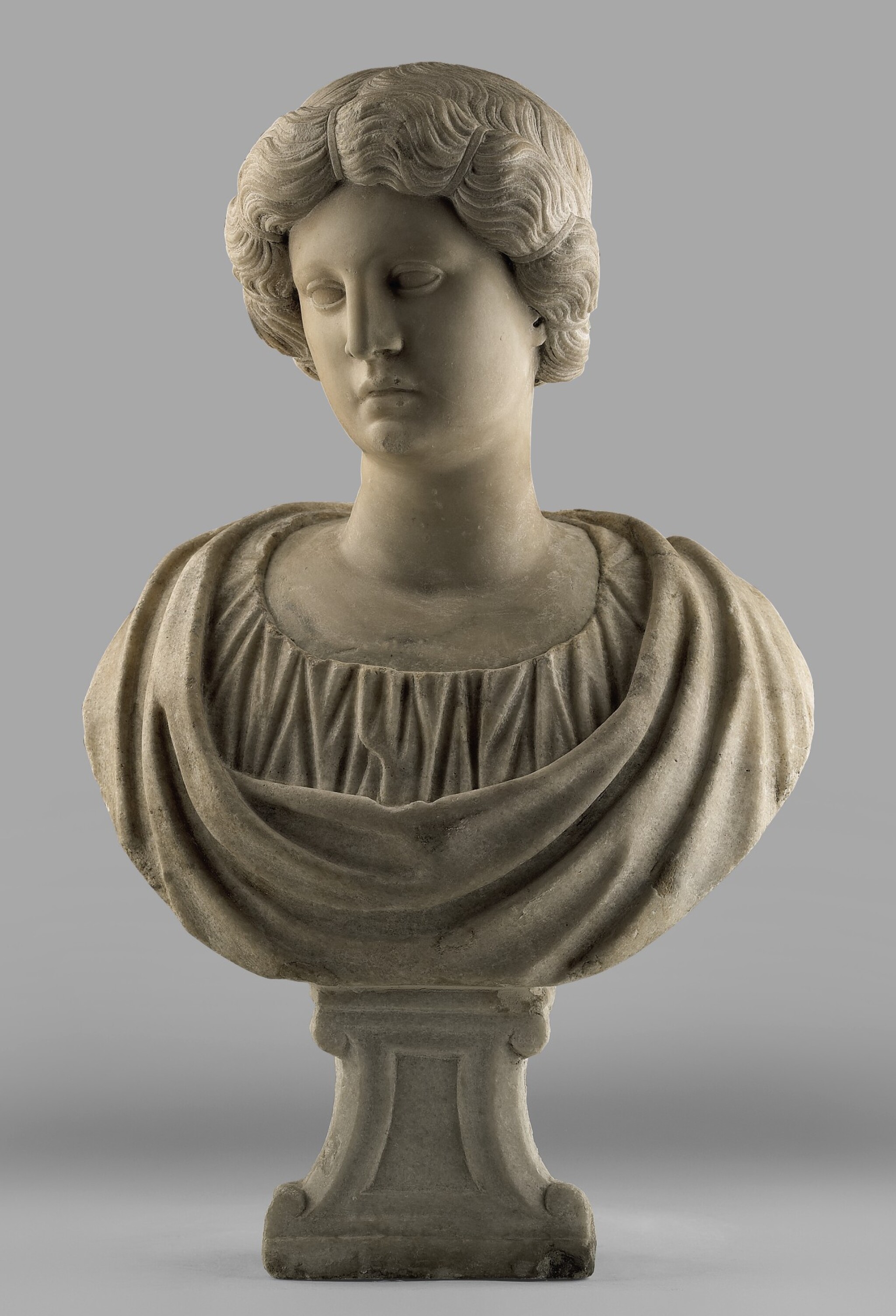 VENICE, THE HEAD FIRST HALF OF THE 16TH CENTURY, THE SHOULDERS 17TH/18TH CENTURY

Standard surface abrasions and chipping commensurate with age. Chip to bottom of her chin and tiny chip to top and bottom lip on right. Well done restoration to bottom portion of nose. Shoulders with losses on edges. Few restorations to chips on her proper left side. Large loss to drapery on back behind shoulders. Some standard chipping along base. Otherwise overall good condition, lovely surface, and beautifully carved.

By descent, through the Marquis de’ Suarez of Convincento, to Angelo I Giacomo Giustinian-Recanati (1757-1813), Venice

This idealized bust of a woman exhibits typical characteristics – wavy hair restrained by a ribbon, head turned and tilted to the right, and a wistful and reflective expression – as well as the exquisite modelling of Simone Bianco’s greatest works. It illustrates the type of all’antica composition for which Bianco, inspired by the example of the older master Tullio Lombardo (1460-1532), was renowned in 16th century Venice. The present bust was recorded in 1726 in the collection of Francesco Trevisan (1658-1732), Bishop of Verona, whose estate was inherited by the Counts Giustinian-Recanati. Writing in 1847, the historian Emmanuele Antonio Cicogna stated that the “museo” of Francesco Trevisan could still be admired in the Giustinian-Recanati palace at the Zattere, in Venice (vol. I, p. 702). Notably, many of the sculptures owned by Francesco Trevisan and his brother Bernardo, a philosopher, had been acquired in the 1708 sale of the collection of Ferdinando Carlo Gonzaga di Nevers, the last Duke of Mantua, who had in turn enriched his palace in Venice, now the Ca’ Michiel dalle Colonne, thanks to the Ruzzini family’s sale of the “museo” of Federico Contarini (1538-1613), a Venetian patrician celebrated for his collection of antiquities, medals, and paintings and statues by the modern masters. It is therefore highly likely that the present bust once formed part of the Contarini and Gonzaga di Nevers collections.

Simone Bianco’s marble effigies are praised in a 1538 letter addressed to the sculptor by Pietro Aretino (1492-1556), discussing three busts Bianco had sent to King Francis I of France (Aretino, 1609, p. 74). The letter demonstrates that the superlative quality and pathos with which the sculptor modeled his works was also recognized beyond the city of Venice. Further correspondence between Aretino and Bianco in 1548 mentions Bianco’s bust of the wife of a certain Nicolò Molino. Aretino explains that the bust delighted not only him, but also Titian (1488-1576) and Jacopo Sansovino (1486-1570).

The present work is stylistically similar to Bianco’s portrait bust in Berlin, once thought to have portrayed the wife of Nicolò Molino, but follows a more classical formula. As his career progressed, Simone became increasingly influenced by Sansovino and began to produce heads inspired more directly by antique prototypes. As such, the date of our all’antica head can be placed between the Berlin bust and the more rigorously classical effigies that followed, namely those in Paris and Copenhagen (Schulz 1995, op. cit., pp. 445-47). The present work is a manifestation of ideal beauty as conceived in the Venetian Renaissance; it is a marriage of the expressiveness of Titian with the disciplined classicism of Sansovino.

The humanistic climate of Renaissance Venice fostered the revival of sculpture inspired by antiquity. However, whereas Tullio Lombardo sought primarily to challenge ancient sculpture, Bianco responded to the desire of many 16th century collectors to possess all’antica portraits. Referred to in documents simply as “teste” (meaning head or bust), these portraits were more often of women than of men and were not only stand-alone works, but occasionally replaced a lost ancient head on Roman busts (Luchs 2009, op.cit., p. 63). In 1532 Marcantonio Michiel wrote of a marble “head of a woman with her mouth open” by a modern sculptor which was given by the Venetian collector Gabriele Vendramin “for the antique marble torso” of Antonio Pasqualigo (Luchs 2009, op.cit., p. 16, no. 22). As very few of Bianco’s works survive, it is tempting, although entirely speculative, to suggest that Michiel was discussing this all’antica portrait which may have had ancient Roman "shoulders" at that time (which were replaced in the later 17th or 18th century, as we see here).

A volume of engravings, dated by scholars to 1726, six years before the death of Cardinal Francesco Trevisan, shows an extremely similar bust, very likely to be the present piece (fig. 1) and notes that it from the Museo Trevisan (see Irene Favoreto, Arte antica e cultura antiquaria nelle collezioni venete al tempo della Serenissima, Rome, 2002, p. 192). The collection was dispersed in the late 19th/early 20th Century. Today, marbles from the Trevisan Collection can be found in numerous American and European museums.

Simone Bianco’s stylistic debt to Tullio is evident in his adaptation of contemporary Venetian portrait painting to his sculpture. However, Bianco demonstrated his own sensibility by melding the revival of the antique with a contemporary aesthetic.