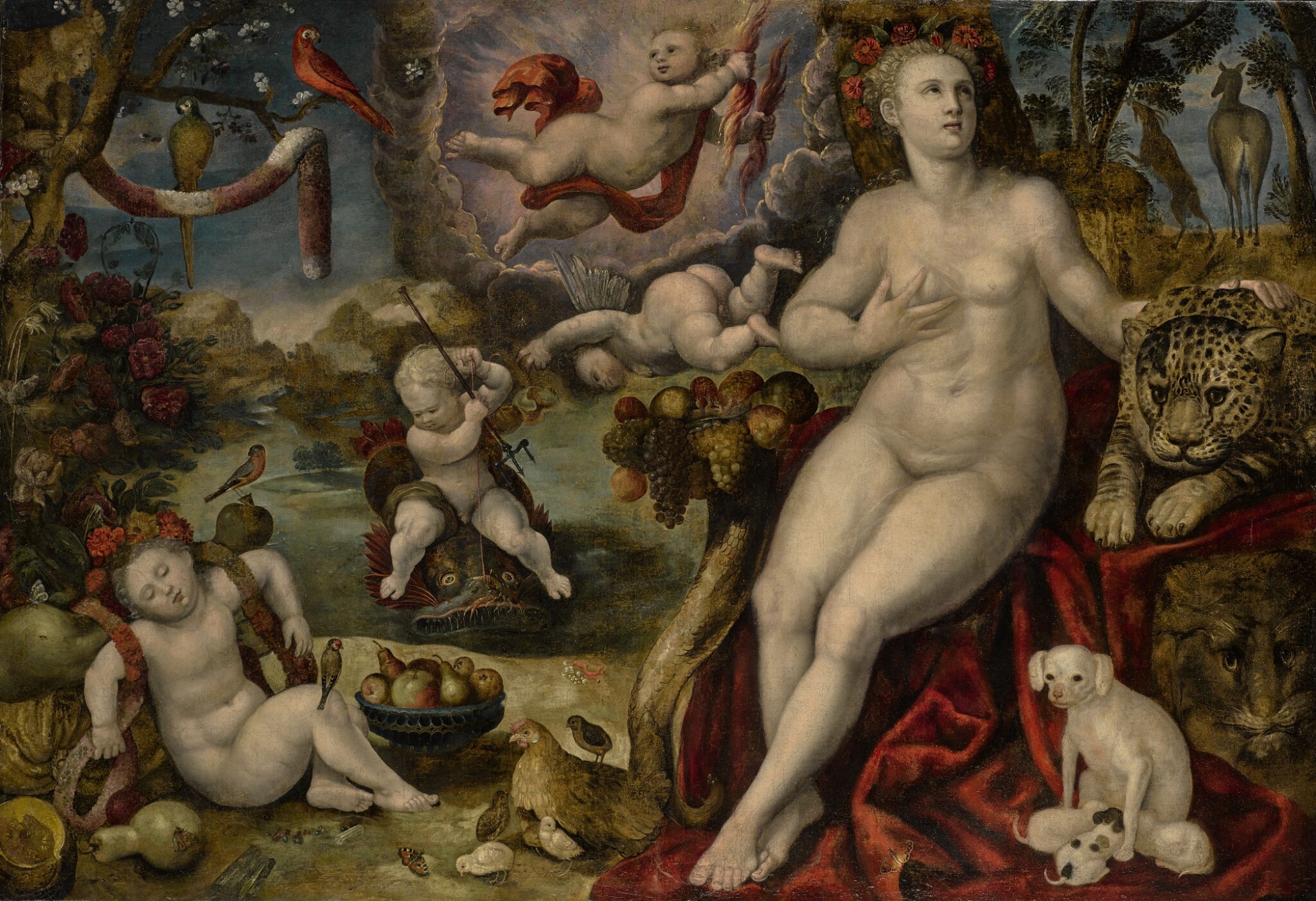 AN IMAGINARY LANDSCAPE WITH ALLEGORIES OF ABUNDANCE AND CHARITY

This large canvas appears to be thinly lined, and there are some small repairs visible on the reverse, for example on the reverse of the upper right corner. Overall, the image reads well and presents a strong impression to the viewer. A thin vertical repaired tear (1") is visible at center of the right edge, a small repaired tear is visible in the upper left sky to the right of the red parrot, and some small spots of repairs are visible in raking light here and there. Inspection under UV light reveals areas of restoration, some more extensive than others, throughout the entire composition, many of which have slightly discolored and are visible to the naked eye. Some scattered strokes of restoration also visible in the fine pattern of craquelure scattered here and there. Offered in a brown wooden frame with some decorative gilt details.

An elaborate allegorical scene unfolds across this large and visually distinct canvas. A female figure with golden hair and a crown of red flowers reclining in this imaginary landscape seems to serve as an allegorical representation of abundance and charity. As abundance, she is surrounded by the traditional features like her cornucopia, and at her feet rest animals nursing their young. As charity, she holds her hand to her breast, and the children that normally would closely surround her instead appear in the guise of putti, each of whom represent one of the four earthly elements.

While this canvas may at first seem to recall the large allegorical paintings made in Florence in the last quarter of the sixteenth century by Northern artists, such as Jacobus Stradanus, in composition and handling it correlates with works that arose from Rudolf II's court in Prague around the year 1600, where there was an increased interest in exotic animals, flora, fauna, and allegorical details, all of which are recorded present in this scene. The putti, for example, compare to those in Hans van Aachen's Triumph of Cupid and Bacchus, one side of a double sided painting on alabaster mentioned in the inventory of Rudolf II.1 Some of the animals, like the monkey and exotic birds in the upper left as well as the leopard and lion near the right edge compare stylistically to the well-known paintings of Roelandt Savery, Rudolf II's animal painter. Much of the exotic naturalia echoes the details found in the meticulous works of Joris Hoefnagel and his son Jacob Hoefnagel, both of whom were artists active in Prague around the turn of the century and the latter of whom was appointed court painter to Rudolf II in 1602.

The breed of dog in the lower right corner, with its square ears, large chest, thin legs, and rounded back, also seems to have been popular in central Europe during this period. It appears in a portrait of Archduke Ferdinand by Joseph Heintz,2 in a painting that possibly depicts Bathsheba by Hans van Aachen,3 and on one sheet of an illuminated calligraphy book illustrated by Joris Hoefnagel and dated to circa 1591-1596.4