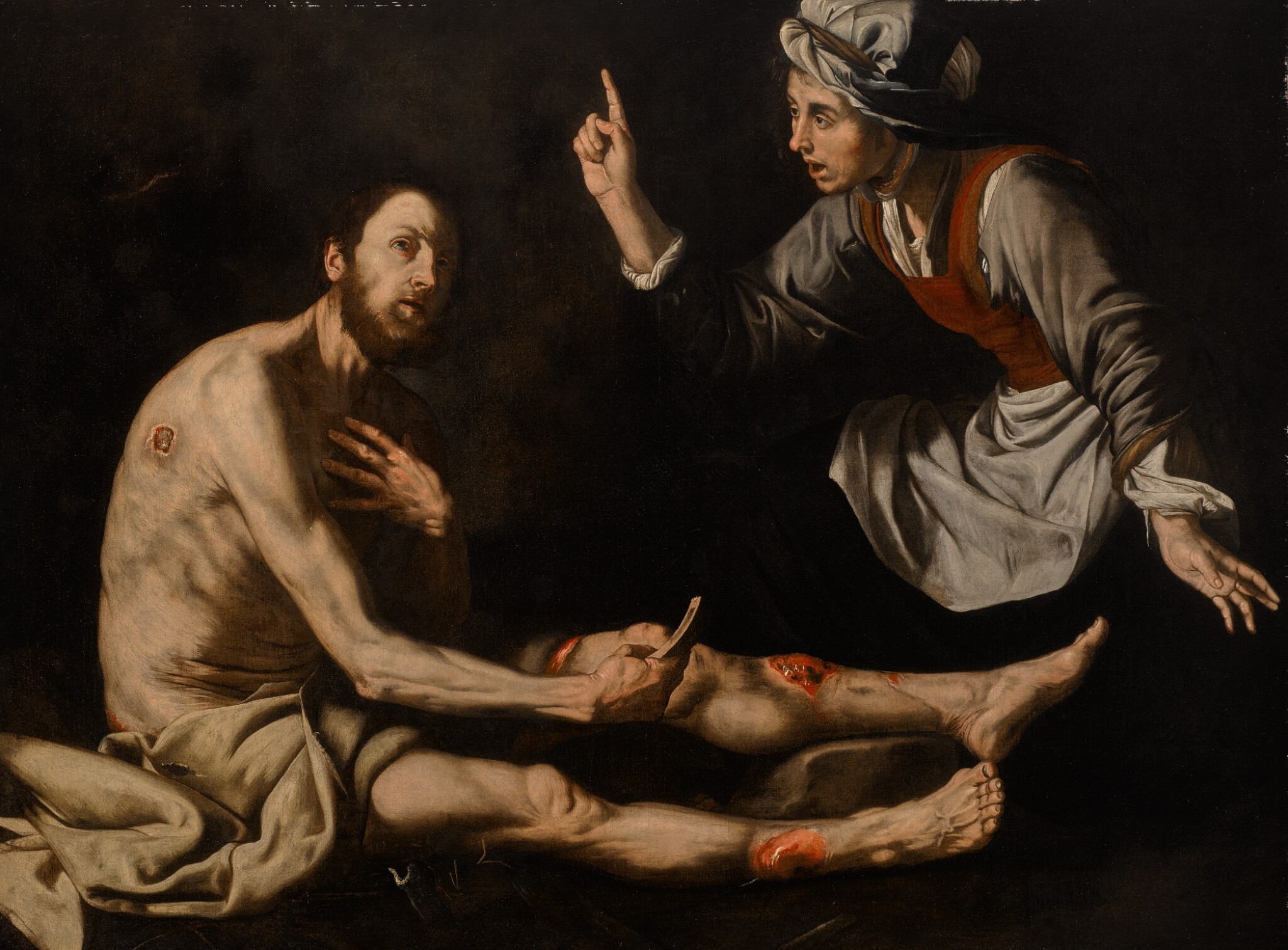 JOB ON THE ASH HEAP

Probably Fernando Enríquez Afán de Ribera (1583-1637), 3rd Duke of Alcalá, viceroy of Naples from 1629-31, by whom presumably commissioned from the artist, and then sold in Genoa in 1637 with other paintings from his collection ("quadro grande de Job");

By descent through a cadet branch of the family to Giovanni Carlo Doria d'Angri (1788-1854), Naples1;

Acquired by the ancestors of the present owners in the mid-19th century, and thence by descent.

This magnificent Job on the Ash Heap has resurfaced from obscurity only very recently, having been last recorded in the collections of the Doria family of Genoa and Naples, and passing into a private family collection where it was discovered just a few years ago.2  It can be dated to circa 1630 on stylistic grounds and its reappearance marks a major addition to the artist's corpus, as an important work of Ribera's full maturity.

Ribera had moved from Rome to Naples in 1616, and despite his rough beginnings there (local Neapolitan artists were famous for their antagonism towards those they perceived as interlopers) he quickly made a name for himself. In just a few years he had established a practice that attracted the attention of patrons even outside the city, receiving a commission, for example, from Grand Duke Cosimo II de' Medici as early as 1618. Ribera continued to build upon his grand manner throughout the 1620's and into the 1630's as his fame and success increased, eventually becoming a sort of unofficial painter to the viceregal court. His pictures of the late 1620's and early 30's had begun to display a renewed interest in an intense realism, and a closer scrutiny of his subjects, with a much more touching and human pathos.3

It is from this moment of artistic pre-eminence and international renown that the Job on the Ash Heap dates, circa 1630. From his early years, Ribera had been producing similarly monumental, horizontal canvases depicting religious or biblical subjects with the main figure of the composition disposed, full-length, across the bottom of the picture plane. Indeed, it is a configuration which the artist appears to have remained interested in throughout his career, providing him with a suitable format for a variety of subjects, as appropriate for gallery pictures as for paintings meant for religious use. When the Job first reappeared, it was dated to the very early 1620's, when Ribera had started to experiment more widely with this type of picture.4  Indeed, Job has an affinity with a number of paintings of that moment, for example a signed and dated Saint Sebastian cured by the Pious Women of 1621(Museo de Bellas Artes, Bilbao, see Spinosa 2003, op. cit., cat. A50) or the Pietà (National Gallery, London, Spinosa 2003, cat. A47). The latter of these, in fact, at one point shared the same provenance with the Job, when both were in the Doria collection (see below) and were considered of similar enough shape and conception as to be hung as a pendant pair. After the recent restoration of the Job, however, Spinosa has reconsidered his dating of the picture, preferring to place it circa 1630. This certainly would make sense stylistically, as the painting appears to be a more mature work, betraying a subtler and more psychological approach. The existence of a (studio?) version of the picture (art market, New York) which bears a signature and date of 1632 also supports this theory; although apparently apocryphal, this inscription is suggestive that the original canvas should date to about the same time.5

The episode of Job on the Ash Heap is quite rare in Baroque painting, and it appears to be Ribera's first major treatment of a subject from the Old Testament, at least the first that is extant. It is an interesting choice, and allowed the artist the full scope of the expressive and powerful style that he had developed over his early years in Naples. The moment portrayed is particularly poignant and well suited to Ribera's particular skills: effects of light and dark, the rendering of the texture of skin, the monumentality of the figures, and the emotiveness of the protagonist.  Ribera has adhered very literally to the biblical text as related in the Book of Job (2:7-10). Job was a prosperous and godly man from the land of Uz, blessed in his wealth and family. Satan, seeing this, questioned Job's dedication to God, and wondered if he would be so pious in the face of adversity. God allowed Satan to try Job, and after destroying both his wealth and family to no effect, suggested that another test was in order:

So went Satan forth from the presence of the Lord and smote Job with sore boils from the sole of his foot unto his crown. And he [Job] took him a potsherd to scrape himself withal; and he sat down among the ashes. Then said his wife unto him, "Dost thou still retain thine integrity? Curse God, and die." But he said unto her, "Thou speakest as one of the foolish women speaketh. What? Shall we receive good at the hand of God and shall we not receive evil" In all this did not Job sin with his lips.

The choice of such an unusual subject suggests that it must have been the specific order of a patron, although no document recording the commission is known. It has been rather interestingly hypothesized, however, that the first owner of the painting was Fernando Enríquez Afán de Ribera (1583-1637), 3rd Duke of Alcalá. 6 The Duke was a seasoned art collector even before he arrived in Italy in 1625, appointed as ambassador to the Holy See. He had been advised in his art purchases by Francisco Pacheco, and had added onto the Casa de Pilatos, his house in Seville, a picture gallery in which to show his collection. Upon his arrival in Naples as Spanish Viceroy, a position he held from 1629 to 1631, he became one of Ribera's most important patrons, ordering numerous works from the artist. These included several masterpieces, amongst which was what can be considered the artist's most strange and visually jarring painting, the Portrait of Magdalena Venturi, the Bearded Woman (1631, Toledo, Palacio Lerma). After his various appointments in Italy, the Duke was sent north to Austria, where he died in 1637 at Villach. Later that year, a significant group of works from his collection were sent for sale in Genoa, and among them was a painting described simply as a "quadro grande di Job".  Given the Duke's relationship with Ribera, the years of his office in Naples which correspond to the likely date of the present canvas, the fact that a picture from his collection of the same subject appeared for sale in Genoa the year of his death, and the appearance of the Job in the collection of Marcantonio Doria soon after (see below), it seems very likely that the Duke of Alcalá was the first owner of the painting.

The first certain reference to the painting was when it was in the collection of Prince Marcantonio Doria, one of the most fascinating collectors of his day, whom may be presumed as the purchaser in Alcalá's sale. A scion of a great Genoese noble family, Doria's taste was refined and shrewd, and centered around Genoese and Neapolitan painters.7 His most canny decision was to commission the Martyrdom of Saint Ursula directly from Caravaggio, who was then living in Naples. The prince's relationship with Naples, in fact, was both artistic and financial, acquiring land and paintings there alike, and his activity was such that in 1637, the year before he likely bought the Job, he was granted the title of Prince of Angri (in the province of Salerno) by the King of Spain.  It is not surprising, therefore, that he would have purchased a major work by Ribera when it became available on the local Genoese market.

Indeed, Doria had long been an intimate patron of the artist; he had numerous paintings by Ribera's father-in-law Azzolino, and had ordered a series of paintings from Ribera as early as 1616, barely after his arrival in Naples. In fact, the Job was displayed in Palazzo Doria as a pendant to another picture by Ribera of the Pietà (London, National Gallery) which had been paid for in 1620 (see above). The painting then passed with the inheritance in the Doria family, going first to Marcantonio's son Nicolò, through whose brother's children it passed eventually to Giuseppe Doria (1730-1816) in whose collection it was seen by the Genoese art critic Carlo Giuseppe Ratti, hanging together in a grand reception room with many of the family's greatest pictures: "A canto a questa sala è un salotto assai considerabile per i preziosi quadri, ond'è arricchito... li due quadri con Cristo Morto, l'altro col Santo Giobbe sono del Ribera...8  It appears again in a listing made during the period of the Ligurian Republic, after Doria had fled where it is rather precisely described as "Giobbe colla Moglie che l'insulta del Spagnaletto." The Job then passed into a cadet branch of the family, the Doria d'Angri, then living in Naples, and was purchased by the ancestors of the present owners in the mid-19th Century.

1. The Job on the Ash Heap was sent from Genoa to Naples in 1838, according to unpublished letters from his agent in Genoa to Giovanni Carlo Doria (see L'Età di Rubens, p. 268).

2. The painting was spotted by Prof. Benito Navarrete, who in turn pointed it out to both Gabriele Finaldi and Nicola Spinosa (see literature).

3. Spinosa in discussing some of the paintings of his period noted it was as if Ribera was attempting to "cogliere dal vero e a trasferire sulla tela apparenze fisiche, stati d'animo e reazioni psichiche dei personaggi raffigurati....sempre vissuta intensamente e con forte partecipazione emotiva [pluck from real life and move onto canvas the physical apperances, states of mind, and psychological reactions of the people he depicted,... always intensely seen with [his own] strong emotive input]".

4. Spinosa placed the picture in his 2003 catalogue raisonné of the artist (see Literature) amongnst the works of this period circa 1620; his revised 2006 edition notes that after seeing the picture freshly restored, that the date of circa 1620 was erroneous and that circa 1630 was more likely.

5. A dating of circa 1630 also fits well if the painting was indeed commissioned by the Duke of Alcalá, as has been supposed (please see the note).

6. The connection between a painting of Job listed in the Duke of Alcalá's sale in Genoa and the painting that appears later in the inventory of Marcantonio Doria was first suggested by Piero Boccardo, see Genova e la Spagna: opere, artisti, committenti, collezionisti, 2002/3, pp. 320-321; this is further expounded upon in the entry on the present painting when it was exhibited in the L'Età di Rubens (see exhibited), and demonstrated to be the Doria picture.

7. For a detailed discussion of Doria, with examples of paintings which were in his collection, including the present work, please see L'Età di Rubens, p. 261 passim. This publication explains in detail the present painting's provenance, with the relevant documentary evidence. The reverse of the painting was marked with the prince's cipher, as were other paintings from his collection including his Caravaggio, which was visible before it was relined.

8. "Next to this room is a reception room, quite impressive because of the precious paintings with which it is arrayed... the two paintings with the Dead Christ and the other with Saint Job are by Ribera," C.G. Ratti, Istruzione di quanto può vedersi di più bello in Genova in pittura, scultura e architettura, Genoa 1766, p. 286.