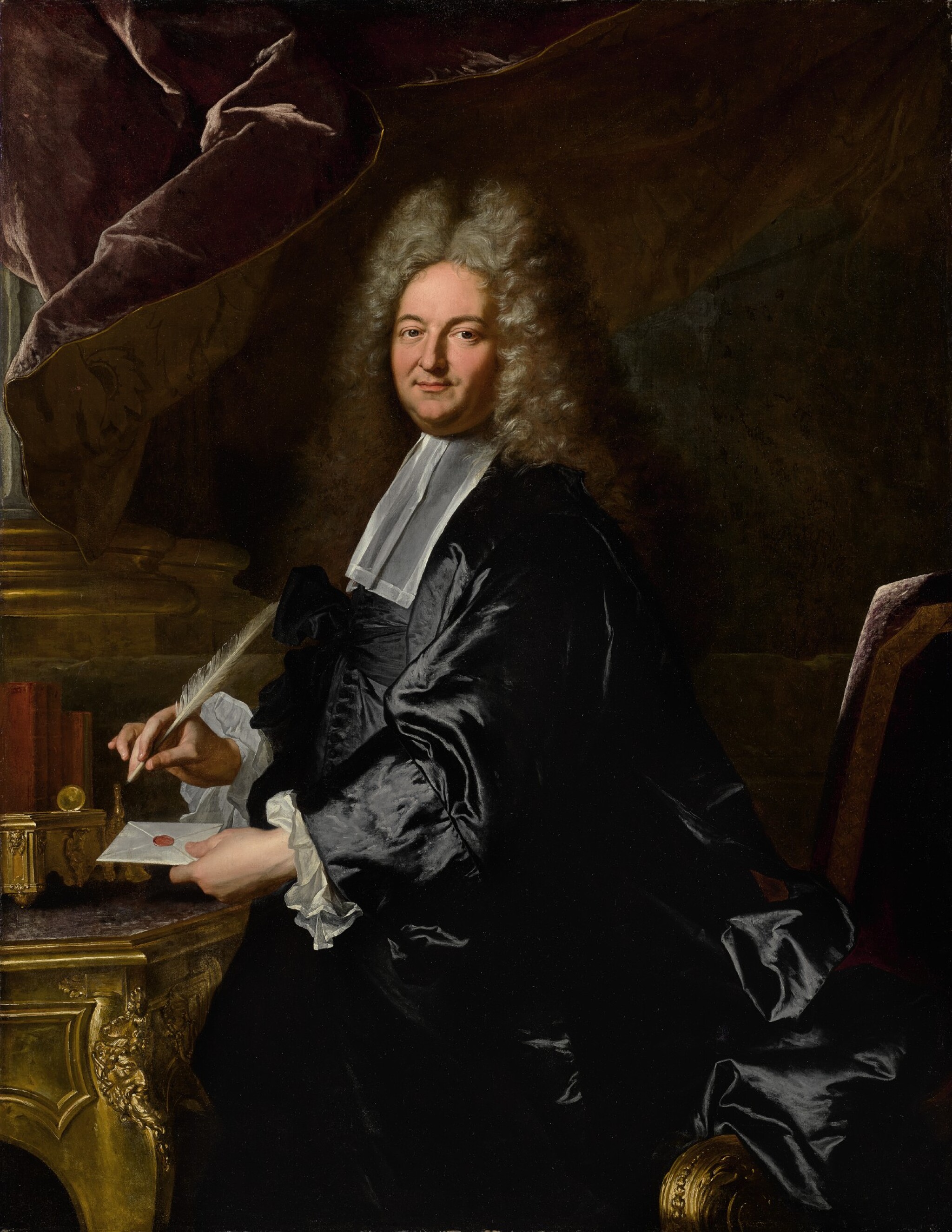 The canvas has an old relining and is flat and stable. Overall the painting is in good condition and the paint layer is well-preserved. At center left, in the background, there is a small, 1-cm loss and slight dent in the canvas which is not bothersome. The paint has thinned a bit in some of the mid-browns, most noticeably in the gentleman's wig and in the underside of the curtain drawn above him. The highlights and details, particularly in the whites and gold of the desk, however, are vibrant. There is some scattered retouching throughout which is visible under UV but not with the naked eye. It mostly addresses some of the thinning of the browns and shadows, particularly in the sitter's hand and areas of the background. There is some strengthening in the darker areas of his hair, but the face remains extremely well-preserved. Overall the canvas is in good condition and can be hung as is. Offered in a giltwood frame.

Please note that the drawing illustrated as fig. 1 is in the collection of the Bowdoin Museum of Art (inv. no. 2017.9) and is a presentation drawing after the painting, not a preparatory drawing as stated in the printed catalogue.

By descent to his eldest son, Charles Jean-Baptiste Fleuriau of Morville (1686-1732);

By descent to their son Ambroise Polycarpe de La Rochefoucauld (1765-1841);

By descent to their son Sosthenes de La Rochefoucauld (1785-1864), second Duke of Doudeauville;

By descent to a family in Buenos Aires;

From whom acquired by the present owner.

Fleuriau d'Armenonville grew up between Paris and the family estate of Armenonville, near Maintenon, and began his career as Clerk of the Comptroller General of Finance, Claude Le Peletier (1631-1711).  By 1686 he had become a councilor to the government of Metz and as an aspiring politician, commissioned a portrait of himself by Hyacinthe Rigaud, the most prominent portrait painter to the court. Now lost, Rigaud's first portrait of Fleuriau d'Armenonville is recorded in the artist's account books from 1692, with a payment made for 360 livres.  By the time of Rigaud's second portrait of Fleuriau d'Armenonville in 1706, the young politician had been appointed as the director-general of Finance in Metz. For this portrait, a price of 400 livres is recorded.

The present painting, his third and final portrait by Rigaud, was completed in 1709 and would become his official portrait. As early as 1708, Rigaud's studio assistant Jean-Baptiste Montmorency was paid 6 livres for a drawing after the painting (fig. 1). Fleuriau d'Armenonville is seen turned aside, dressed in a large black parliamentary dress with its white flap in two parts; a belt is tied at the front of his torso of the in same color as the dress. He stands upright at a gilded desk, in a palace or official room. In the background a red curtain falls across a column, animating the composition. Fleuriau d'Armenonville is posed in the midst of sending a sealed envelope that he holds in his left hand, while his right holds a feather that he just dipped in an inkwell. The virtuosity of the rendering of the textures, the subtle and natural folds of the cotton cuffs, and the extreme finish of the complexions of the hands and the face all exhibit a level of quality in which no external participation from the workshop seems to have been enlisted.

The success and dispersal of the image were fast. At least five copies are recorded as being made by the workshop in the years to follow, and the painting was engraved by Jean-François Cars in 1720. Fleuriau d'Armenonville would go on to become the Secretary of State at the Ministry of the Navy from 24 September 1718 to 14 August 1723 and subsequently the Keeper of the Seals, a position he held until the year before his death in 1728.

We are grateful to Stéphan Perreau for his assistance with the cataloguing of this lot; an extended entry by him is available upon request.