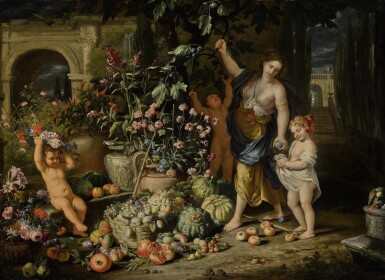 ABRAHAM BRUEGHEL AND NICOLA VACCARO | A YOUNG WOMAN PICKING FIGS WITH THREE CHILDREN IN A TERRACED GARDEN, WITH URNS OF CARNATIONS, MORNING GLORY, AND OTHER FLOWERS, AND BASKET OF GRAPES AND OTHER FRUITS NEARBY

ABRAHAM BRUEGHEL AND NICOLA VACCARO | A YOUNG WOMAN PICKING FIGS WITH THREE CHILDREN IN A TERRACED GARDEN, WITH URNS OF CARNATIONS, MORNING GLORY, AND OTHER FLOWERS, AND BASKET OF GRAPES AND OTHER FRUITS NEARBY

A YOUNG WOMAN PICKING FIGS WITH THREE CHILDREN IN A TERRACED GARDEN, WITH URNS OF CARNATIONS, MORNING GLORY, AND OTHER FLOWERS, AND BASKET OF GRAPES AND OTHER FRUITS NEARBY

This work has not been recently restored, but it is generally in good condition. The canvas has an old lining which is nicely stabilizing the paint layer. The surface is slightly flat as a result of the lining. There is a significant dirt layer on the surface. The paint layer has not discolored or been abraded. Retouches are faintly visible under ultraviolet light in the flower pot in the lower left, in the wings of the bird in the upper left, and beneath the apples beneath the figures on the right side. Some of the dark folds in the blue drapery worn by the woman have been strengthened. There are visibly darkened retouches to the left of and above the parrot on the far right, and in the darker colors in the upper right. There are a few retouches in the chest and left side of the face of the woman, and in the lower part of the white dress worn by the child.

From whom acquired by Major Herbert Frederick Brudenell Foster (1908-1996);

Likely dated to circa 1685-1690, this refined canvas is a rare collaboration between Abraham Brueghel and Nicola Vaccaro, the former among the most celebrated still-life specialists of his time and the latter a much sought after figure painter from Naples. The two artists only collaborated on a few occasions, and the present example is the true masterpiece of their joint efforts.  Abraham Brueghel was the most talented and successful son of Jan Brueghel the Younger. Born in 1631 in Antwerp, he spent the majority of his career in Italy, where he established a career as a still life painter. His early years in Italy, from 1659, were spent in Rome, learning to paint in the manner of Mario Nuzzi, Michelangelo Cerquozzi and Michelangelo Pace.  Around 1676, he brought his monumental style to Naples, where he found considerable success. In about 1684, he established a successful working relationship with Nicola Vaccaro, a figure painter who trained in the studio of his famed father, Andrea Vaccaro. As visible in the present work, the two were well matched: Brueghel with his lush and luminous landscapes and Vaccaro with his beautiful and lithe figures.

Another collaborative version of this composition by Brueghel and Vaccaro is known, a testament to its success on the Neapolitan market.1 That painting shares an overall impression and date with the present, though it is simpler in the rendering of its details.  Comparative figurative works by Vaccaro include his Angel Appearing to Joachim and Angel2 and his Diana with her Attendants, once attributed to Paolo de Matteis, but now given in full to Vaccaro.3