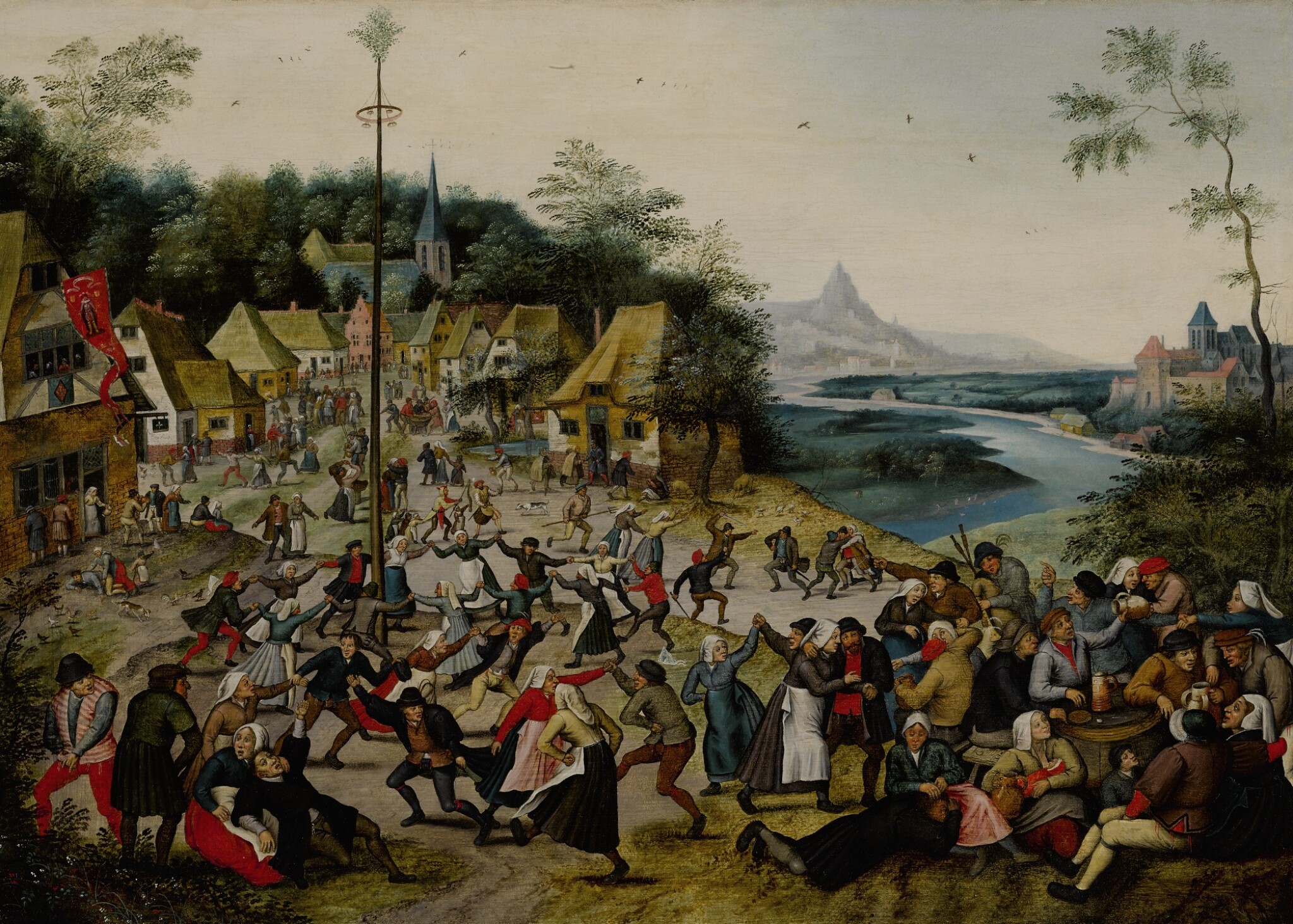 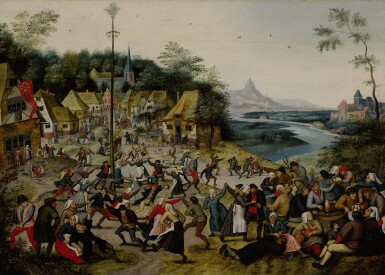 ST. GEORGE'S KERMIS WITH THE DANCE AROUND THE MAYPOLE

This picture is in very good condition overall. The painting appears to have been recently cleaned and restored; the beautifully-executed restoration has been completed in a restrained manner. Thin lines of restoration follow the joins in the panel. Retouching has been applied to visually suppress the appearance of wood grain in the sky, a typical aging mechanism, as well as to compensate for a loss in the upper left corner. In the crowd of figures very little retouching exists and where it does, addresses only minor losses or scratches. The varnish is clear and even. A cradle is attached to the reverse of the panel; the panel is planar. This painting has no need of treatment and may be displayed in its current excellent state.

Please note that there is a guarantee and irrevocable bid on this lot.

Acquired by an American private collector circa 1940, and thence by inheritance to the previous owner;

From whom acquired by the present collector in July 2009.

Brueghel's St. George's Kermis with the Dance Around the Maypole, is a large, ambitious work, an independent composition of his own design, that depicts a village festival in all its raucous splendor. The maypole itself is just left of center, and round it circle the dancing villagers, their movements echoed and reversed by a second group placed directly in the foreground. Flanking the dancers are other kinds of celebrants. Those at the left are somewhat worse for wear: a man collapsing onto his partner's lap and two others relieving themselves, one directly in our line of vision. At the right is a larger group gathered around a cask, as pitchers of drink are handed around and a bagpiper entertains the company. Behind all this activity stretches the village and more revelry as well as scenes of daily life, so that sword fights and dancing alternate with almsgiving and strolling families.

The subject of the kermis (or fair) in its various forms is one that Brueghel first took up in 1616, the same year that he changed the spelling of his name and began to distance himself from his late father. In addition to the always popular works after Pieter the Elder's designs, Pieter the Younger found a ready market for his own inventions, and the St. George's Kermis with the Dance Around the Maypole is one of the high points of that select group.1 A picture cited by Ertz as on the Paris art market (Ertz E1226) is the first recorded version, and the present painting dates from just a year later, 1627. It is one of just three signed and dated versions of this subject and one of nine autograph versions altogether.2  Here as in so many of his paintings, Brueghel made various compositional changes as the subject evolved. This Dance Around the Maypole is unique in showing the couple at the far right (the woman with the white headdress and the man with the red cap) set in front of a bush rather than squashed into a tent.3  It is also one of the tallest versions, so that the top of the maypole is fully visible, and there is a band of sky above the trees at the left and right. The present work was apparently the one known to Marlier from a photograph in the Witt Library.4 It appears to be the same in all visible details apart from the fact that the man at the extreme left is holding a spade rather than relieving himself. However, the spade was most likely added by a prudish owner and has since been removed.

The original inspiration for this complex work may date back to such prints as Barthel Beham's large and popular woodcut Peasant Holiday of 1534, which shows a panorama of village life, with figures dancing around a pole at the left.  But Brueghel drew on a number of themes and sources to create St. George's Kermis with the Dance Around the Maypole. He combined the traditional Mayday celebration, still very popular in the early seventeenth century, with the festival of St. George, which took place on April 23rd. The saint's day is indicated by the large red banner at the left showing the standing saint with a bow and arrow. On a similar banner that appears in the Kermis of Saint George, an etching by Joannes and Lucas van Doetecum after Pieter Bruegel the Elder, one can read the inscription laet die boeren haer kermis houuen (let the peasants have their kermis), but here the characters are illegible. The religious nature of the festival is otherwise largely absent, apart from the tall spire of the church in the background. Aspects of the village itself recall some of Brueghel's other kermis scenes, while the river landscape and mountains at the right are a surprising quotation from the Elder's Preaching of St. John the Baptist. Here, however, we see tiny figures frolicking in the river rather than a baptism. Part of the beauty of Brueghel's achievement is that he has taken these various elements and bound them together into a seamless depiction of gaiety and celebration. Though the St. George's Kermis with the Dance Around the Maypole is not lacking in earthy elements and moments of anger, Brueghel's view is largely a benign one, with none of the astringent elements of his father. His bright palette and light touch have pleased and entertained his audience from the early seventeenth century and continue to do so today.

3. Almost all other versions show the tent at the right. The two exceptions are Ertz E1230a and E1231a., but in those the form of the foliage more closely resembles a pollarded tree rather than a bush.