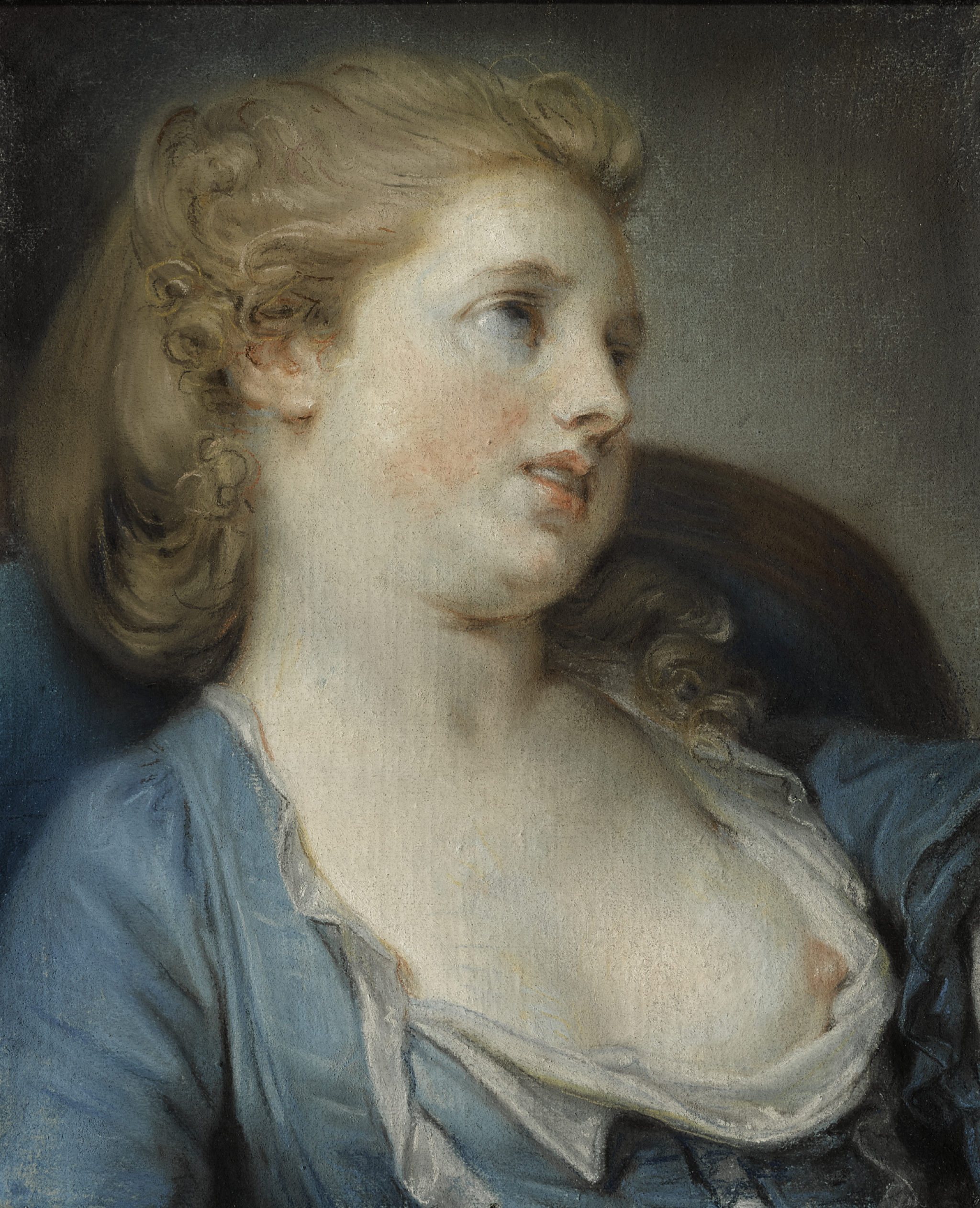 A GIRL IN A BLUE DRESS, BUST-LENGTH AND LEANING BACK ON A CHAIR

Probably Auguste-Louis Bertin de Blagny (1725-1792), conseiller d'État (according to the wax seals on the verso);

This pastel of a seductive young woman, her dress undone to expose one of her breasts, is an exemplary example of a favorite subject matter of the artist which also reveals Greuze's remarkable skills as a pastellist. The range of colors included and his quick, confident mark-making combines with the soft tones of the overall composition and subtle rendering of the fabrics and textures to create an impressive work of art and demonstrate his mastery of the medium. Recent re-examination of the pastel by scholars has revealed it to be an important work form Greuze’s earlier career; it can be dated to circa 1765.

When he examined the pastel in 2010, Edgar Munhall dated the work to circa 1800, in the final years of the artist's life,1 though more recent study has suggested a much earlier date, circa 1765. On the reverse of the frame, which still has its original backing bearing the wax seals of the Bertin de Blagny family, there is a small piece of newsprint which can be identified with an article in the Gazette de France published on 21 January 1765. Thus the pastel must date to around that time, as even if the framer would have used an old paper, it would not have been much later than a year or two beyond the date.

The earlier dating makes sense given the similarities between the work and the pastel in the National Gallery, Washington, The Well-Loved Mother (fig. 1), which is dated to 1765 as well. Both pastels include dark umber markings that define certain areas, for example in the ears, and exhibit similar layering of whites and peaches in developing the undulations of the skin, along with subtle blue veins beneath the paler areas, such as in the temples of the eyes.  The subject of a young woman depicted partially undressed is typical of Greuze's unique mixture of voluptuousness and dreamy reflection that he first developed circa 1765 and subsequently repeated on numerous occasions through a wide range of variants in order to satisfy an ever growing demand for such erotic imagery. The present pastel can also be related to his painting Le Tendre Desir in the Musée Conde at Chantilly, which was painted circa 1769.2

Another detail which points to this earlier dating is the hairstyle of the young woman. It is done in a tapé, a style popularized in Paris in the 1760s by women including the Comtesse du Barry. Indeed she wears a more formal version of the hairstyle in Augustin Pajou's famous marble bust which dates from 1773.3

We are grateful to Neil Jeffares, who has examined the pastel firsthand, for his assistance with the cataloguing, particularly in identifying the coat of arms on the wax seals to be from the Bertin de Blagny family, rather than the Gouvion de Saint-Cyr family as previously described. Jeffares also identified the date of the newsprint on the verso of the frame.

1. A written certificate from Edgar Munhall, dated 19 February 2010, is available upon request.