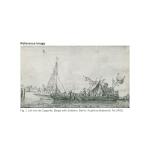 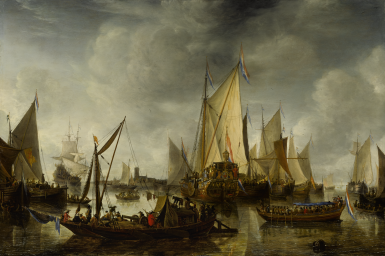 JAN ABRAHAMSZ. BEERSTRATEN | DUTCH SHIPS AT ANCHOR IN A CALM HARBOR, WITH DIGNITARIES IN A BARGE APPROACHING THE ROYAL YACHT OF PRINCE WILLIAM II, AND A FERRY TRANSPORTING A CANNON IN THE FOREGROUND

JAN ABRAHAMSZ. BEERSTRATEN | DUTCH SHIPS AT ANCHOR IN A CALM HARBOR, WITH DIGNITARIES IN A BARGE APPROACHING THE ROYAL YACHT OF PRINCE WILLIAM II, AND A FERRY TRANSPORTING A CANNON IN THE FOREGROUND

DUTCH SHIPS AT ANCHOR IN A CALM HARBOR, WITH DIGNITARIES IN A BARGE APPROACHING THE ROYAL YACHT OF PRINCE WILLIAM II, AND A FERRY TRANSPORTING A CANNON IN THE FOREGROUND

This work is painted on a panel made from three pieces of wood. The panel is flat, and the paint layer is stable. The lower join runs about 1 1⁄2 inches above the horizon, and the upper join runs through the top of the flags of the royal yacht.

As one would expect, retouches have been added throughout the sky to address some of the woodgrain pattern that developed over time. There are retouches in the darker sails of the vessels, and a few others in the dark browns of the hulls of the boats in the lower center and lower left. Although the work may be slightly dirty at present, it looks well and could be hung in its current condition.

From whom purchased by the present owner in 1987.

This large, signed panel is a masterpiece of Jan Abrahamsz. Beerstraaten's versatile and prolific career in 17th century Amsterdam. Though he specialized in topographical views and winter landscapes, it is his rarer maritime scenes like the present, with luminous atmospheres and expansive skies, that most fully reveal his prowess as the leading figure not only in a family of artists but also of the Dutch Golden Age. Here, the Royal Yacht of William II, Prince of Orange, appears at center, approached by a boat full of dignitaries, while a barge carrying a canon fills the lower left foreground.

A soft, golden tone washes over this calm scene, crowded with a variety of vessels at anchor. Several tall ship masts anchor the composition, and vivid tones of blue and red, colors of the Dutch flag, animate the view.  In style, composition, and impression, the present painting can also be compared to works by other contemporary maritime painters in Amsterdam, such as Simon de Vlieger’s Visit of Frederick Hendrik II of Orange to the Fleet at Dordrecht (1649) at the Kunsthistorisches Museum1 and Jan van de Capelle’s Shipping in a Calm at Flushing with a States General Yacht Firing a Salute (1649) at the Getty.2 Van de Capelle similarly recorded the ferry in the foreground of the present work in a drawing of 1646 that is today preserved in the Kupferstichkabinett in Berlin (fig. 1).3

The Yacht of Prince William II was initially intended for his father, Prince Frederick Hendrik. After the elder's death, it was completed for his son in 1647. This royal vessel appears in another example by Beerstraten in the Boston Museum of Fine Arts.4 It is also carefully recorded in a number of works by Willem van de Velde the Elder including a drawing in the Het Scheepvaartmuseum,5 in a painting in the Royal Museums Greenwich,6 and in two paintings in the Rijksmuseum.7