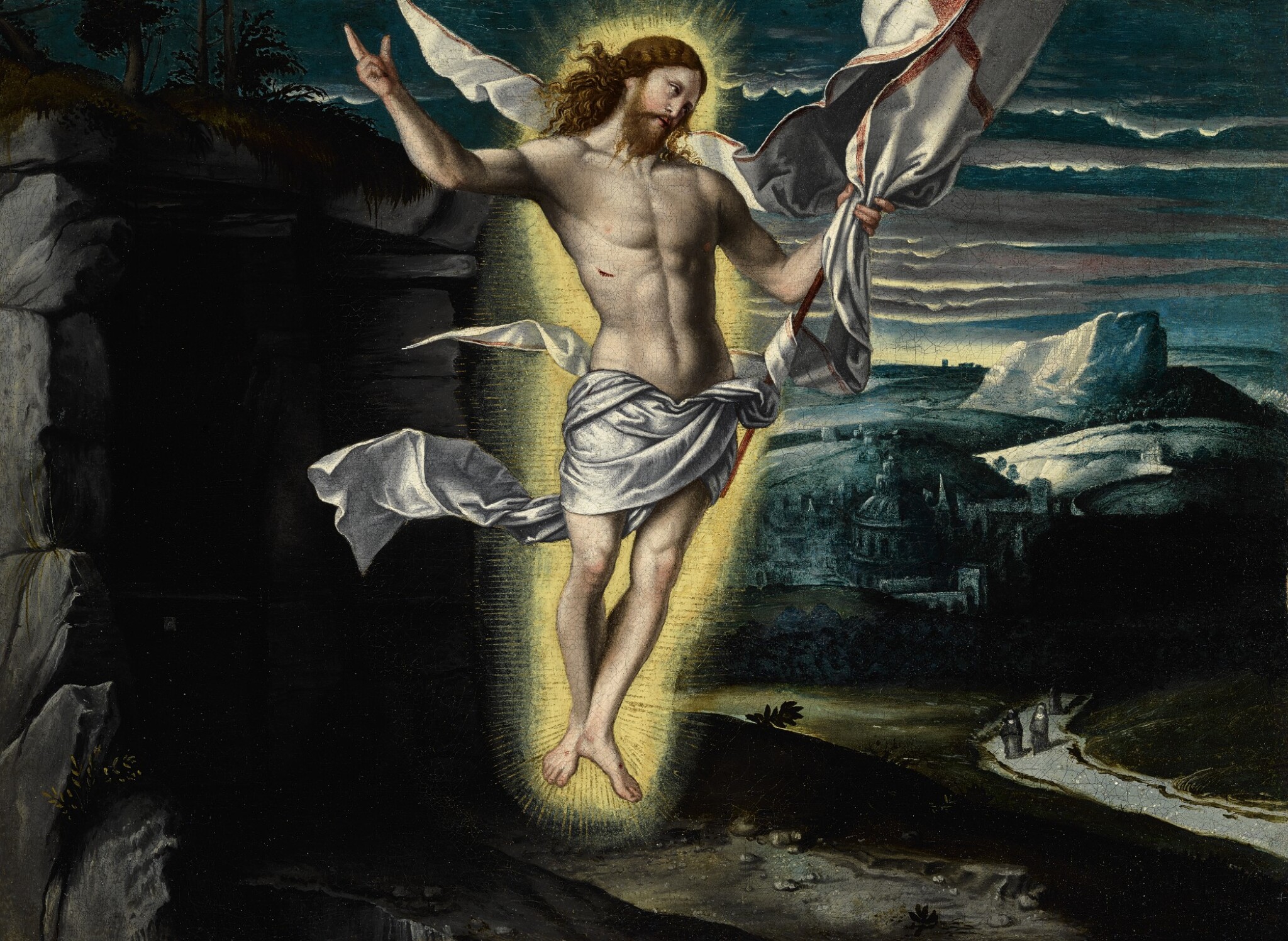 THE RESURRECTION OF CHRIST

inscribed on the reverse of the original canvas in a 17th century hand: Camillo Angeri

This work is generally in very good condition. The canvas is unlined. The tacking edges have been reinforced with linen, and the stretcher is new. An inscription is clearly visible on the reverse of the original canvas. A piece of Plexiglas has been attached to the stretcher, and rests against but is not adhered to the back of the canvas. This protects the reverse, while allowing clear visibility of the inscription.

All of the retouches are clearly visible under ultraviolet light. They can be seen around the extreme edges, in a few cracks in the upper right sky and in a concentration of cracks in the darkest color beneath and to the right of the city on the right side. There is a vertical line of retouches running through the light colored rocks on the far left. A handful of tiny dots of retouching has been applied around the knees of both legs, and there are a few dots in the flag in the upper right. In the golden halo, there is a group of retouches to the right of the legs and a few other tiny spots around the lower legs and feet.

The retouches are very well applied, and the work should be hung as is.

Camillo Angeri, Brescia (according to an inscription on the reverse);

Thence probably by descent in his family;

Recently discovered, this exceptional canvas depicting the Resurrection of Christ is one of Giovanni Battista Moroni's earliest known works. Dating to circa 1545-1548, it predates his painting of the same subject today in the Chiesa di San Martino in Sovere (early 1550s, fig. 1) and it provides a rare glimpse into Moroni's youthful development as an artist, which unfolded primarily in Brescia under the tutelage of Alessandro Bonvicino, known as Moretto di Brescia. What is visible even at this young age is the artist's proclivity for rendering naturalistic scenes with an intense attention to detail and a palpable visual impact—characteristics that would later secure him as one of the most sought after Lombard portrait painters of the sixteenth century.

Born in Albino in the early 1520s, Moroni moved to Brescia in about 1532. By the next decade, he had entered the workshop of Moretto where he served as one of his main assistants from the early to mid-1540s. The two would form a close friendship, and they likely collaborated on some works together in Brescia, such as St. Roch and the Angel in the Museum of Fine Arts, Budapest.  Moroni's independent output from the mid-late 1540s is primarily religious in nature and draws on the influences of his teacher. In the present work, for example, the rocky details in the lower foreground, the horizontal striations of the clouds in the sky, and the rolling landscape with a winding path and a distant mountain can all be compared to those found in Moretto's contemporary canvas dated to about 1540-1545 of the Madonna and Child in Glory with Saints Onuphrius and Anthony Abbott in the Church of Sant'Eufemia in Verona.1 The muscular physique and figure of Christ parallels comparable figures found in Moretto's Passion of Christ with Moses and Salomon (circa 1541-1542) in the Church of Santi Nazaro e Celso in Brescia2 as well as his Christ at the Column (circa 1540-1550) today in the Capodimonte Museum in Naples.3 The color palette used recalls that found in Moretto's Apparition of the Madonna to Filippo Viotti (circa 1534) in the sanctuary of Paitone in Brescia.4

This youthful work also anticipates Moroni's invention of a particular portrait type that he would explore on occasion throughout his later career, namely the portrait of a donor set before a sacred image. One particularly relevant comparison is Moroni's Gentleman in Contemplation before the Baptism of Christ, which dates to about the mid-1550s, and is today in the Etro Collection (fig. 2). In this example, a figure kneels in front of a stone wall and gazes in the direction of a detailed landscape featuring a scene from the Life of Christ that appears in the space beyond the wall, almost as if it arose out of the donor's imagination. While the donor and the sacred image together serve to underscore the donor's piety, each element could seemingly function independently, and when isolating the landscape alone, one finds a close comparable to the present canvas. Though the Etro example is slightly more mature in date, the rendering of both landscapes, figures, colors, and distant architecture can certainly be attributable to the same hand.

The present canvas has survived in remarkably good condition and remains largely unlined, with only strip lining around the edges. On the reverse of the canvas appears an inscription that reads the name of perhaps one of the earliest owners of this painting, Camillo Angeri, who was an art collector and important notary active in Brescia in the seventeenth century. In his will dated 25 April 1678, he left to his cousin Agostino Angeli, or his sons, "tutte le Pittura, che si vitrova in Casa di esso Testatore."

We are grateful to Dr. Simone Facchinetti, who has endorsed the attribution to Moroni on the basis of images. Dr. Facchinetti, who dates the painting to circa 1545-1548, will include this work in his forthcoming catalogue raisonné on the artist, currently in preparation and scheduled to be published in 2021.