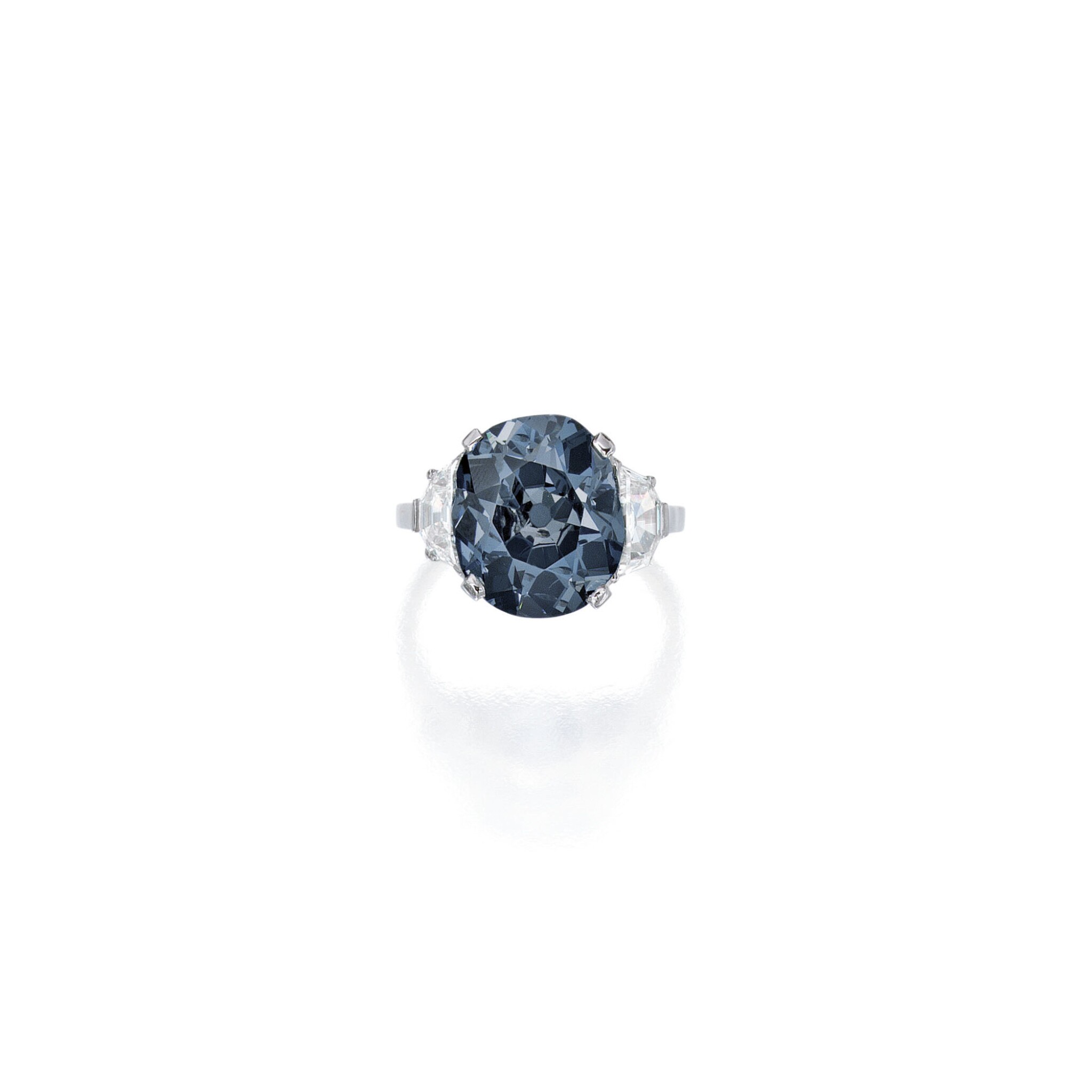 Accompanied by GIA report no. 6173309927 dated September 25, 2019 stating that the diamond is Fancy Deep Grayish Blue, Natural Color, SI2 clarity. Together with a GIA portrait report stating that the diamond has been determined to be Type IIb and is "a rarity of nature and product of human ingenuity... that captivates the eyes and interests of gem enthusiasts worldwide."

In good condition, with light wear to the mounting. Shank interior stamped 10% IRID PLAT for iridium-platinum alloy. The diamonds estimated to weigh a total of approximately 1.20 carats are approximately G-H color, VS clarity. Accompanied by GIA report no. 6173309927 dated September 25, 2019 stating that the diamond is Fancy Deep Grayish Blue, Natural Color, SI2 clarity. Together with a GIA portrait report stating that the diamond has been determined to be Type IIb and is "a rarity of nature and product of human ingenuity... that captivates the eyes and interests of gem enthusiasts worldwide."

In the first century A.D., the Roman naturalist Pliny proclaimed: “Diamond is the most valuable, not only of precious stones, but of all things in this world.” The world’s fascination with diamonds has its origin in India, where diamonds were collected from the country’s vast network of alluvial river deposits. Historians have estimated that India was trading in diamonds as early as the fourth century B.C., with clientele consisting of the most elite members of Indian society. But it was only a matter of time until the mystique and allure of Indian diamonds would spread, through oral traditions and illustrations, far beyond the country’s borders.

Fast forward to the 17th century, when revered gem merchant and traveler, Jean-Baptiste Tavernier (1605-1689) voyaged to Persia and India in search of the wonders that the Far East possessed. Tavernier’s insatiable curiosity, his discerning eye, and business savvy reaped significant rewards, that would have effects beyond his wildest dreams.

In the fascinating accounts of his travels, Tavernier revealed the tricks and the trades of the diamond market in the treasure trove that was India and detailed the incredible diamonds that he saw, instantly captivated with the gems’ optical properties that were equally awe-inspiring and irresistible.  It is only fitting that a prominent discovery and acquisition was imminent. In 1661, Tavernier was shown a recently unearthed 112-carat blue diamond from the Kollur mine in Golconda, India. He was so taken with the majesty of the stone, one truly fit for royalty, that he ultimately purchased it and sold it to none other than King Louis XIV of France. The gemstone, which would have quite an astounding and complicated provenance, was ultimately re-cut into one of the most legendary gems of all time, the Hope Diamond. Tavernier’s Six Voyages (1676) is quite revealing for a myriad of reasons, but for gem enthusiasts, it paints a picture of the unbelievable natural resources held within the vast geography of India, and man’s innate desire to explore and acquire.  India was, and continues to be, a treasure trove of some of earth’s most exquisite natural prizes.

Colorless diamonds are in and of themselves, a miracle of geology and a feat of nature, with optical characteristics that are both hypnotizing and truly beautiful. But rich, vibrant colors that can occur in diamonds, go beyond the realm of human comprehension. According to gem connoisseur Benjamin Zucker, “perhaps one in a hundred thousand diamonds has a deep enough natural color to qualify as a  ‘fine, fancy colored diamond.’” The rarity of fancy colored diamonds is due to the complexities of nature - the absence or presence and type of impurity element in the chemical makeup of the gem, with chance or ‘natural selection’ of elements, playing a huge part. Trace amounts of the chemical element boron are responsible for causing the coloration of natural blue diamonds.  According to the Museum of Natural History, “less than one boron atom per million carbon atoms is sufficient to produce the blue coloration.” Furthermore, most blue diamonds, are part of the “IIb” family and are semi-conductors, possessing the ability to conduct electricity. As if a Type IIb blue diamonds aren’t rare enough, an even smaller amount of blue diamonds can phosphoresce blue when under short wave UV light. The incredible 7.55-carat antique-cut Indian Blue diamond on offer this December (lot 500), phosphoresces red, an even rarer characteristic of exceptionally pure diamonds. The exhibition of red phosphoresce by the Indian Blue is also incredibly significant for what it may reveal about the origin and history of the stone. Based on years of blue diamond scholarship, it has been proven by gemologists that red phosphorescence can occur in diamonds with known origins, specifically from India (the Hope Diamond), and more recently, from South Africa (the Blue Moon). The charming antique-cut of the Indian Blue is undoubtedly reminiscent of those prestigious and magical stones from the Golconda mines, where miners once unearthed some of the earth’s most majestic creations.

The presence of blue in a diamond is undoubtedly rare and equally impressive. But the significance of the color blue, occurring in a variety of tones and saturations, must not be overlooked. It is alluring, mysterious, and captivating. The color blue also holds tremendous significance in India. It seems no coincidence that the Kollur mine in Golconda, India, which famously produced some of the world’s most extraordinary colorless and blue diamonds, lay on the south bank of the River Krishna. Krishna, the most highly worshipped and revered Hindu god, devoted to protecting humanity and destroying evil, is represented as the color blue. Krishna also exhibits the qualities of bravery and determination and has tremendous depth of character. Lord Shiva, who is worshipped as ‘Neelkanth,’ is known as God with Blue Throat, a reference to when his throat turned blue as he consumed all the poison from the churning of the ocean.

Laden with significance, mystery, and prestige, blue diamonds are truly one of nature’s most extraordinary creations. The Indian Blue represents the opportunity to explore the mystery and wonder of nature through one of its most precious gifts.