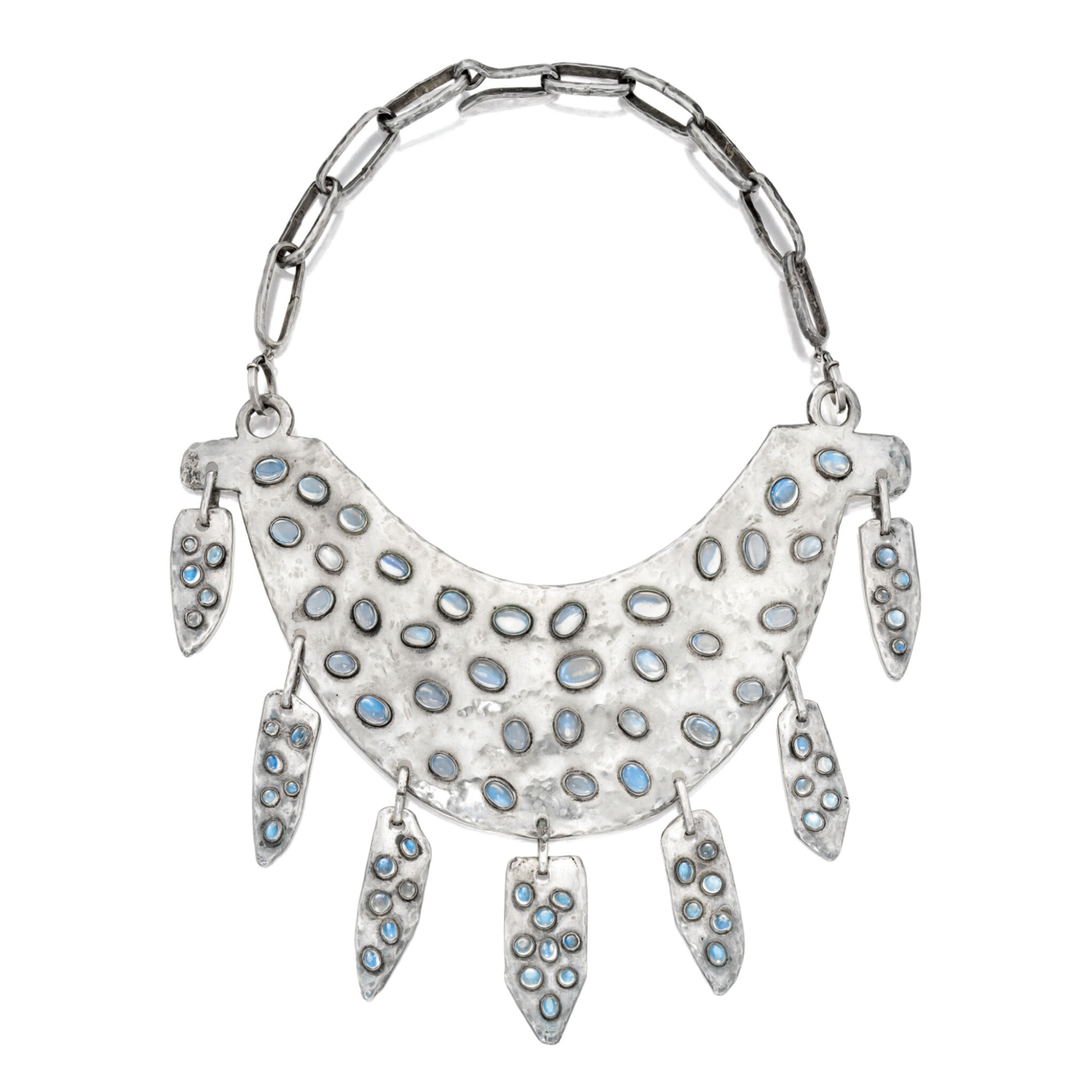 In good condition, with small areas of tarnish and discoloration to the silver commensurate with age. Stamped Sterling. The moonstones, measuring from approximately 11.5 x 8.4 x 3 mm to 3.3 x 3.3 x 1.9 mm, are semi transparent, with soft to moderate iridescence. Dimensions of plaque and fringe approximately 7 x 8¼ inches.

For a necklace and matching cuffs of similar design in the collection of the Millicent Rogers Museum, see Connoisseur Magazine, June 1984 issue.

As a young girl, Natalie escaped Russia with her mother and sister Irina and lived in exile in Paris during the 1920s. She became a noted model for Vogue Magazine, first in Paris and later in New York. Edward Steichen, Horst and Cecil Beaton took many of her fashion photographs. While in London she met the Broadway producer and director John C. “Jack” Wilson, business partner of Noel Coward, Alfred Lunt and Lynn Fontanne. Jack Wilson and Natalie were married in 1937 at his home in Fairfield, Connecticut.

Her close friendship with socialite and fashion icon Millicent Rogers and jewelry designer Fulco di Verdura would result in her collection of several pieces of jewels created by the two, a few of which are on offer here.

Rogers, notable for having been an early supporter and enthusiast of Southwestern art and culture, also designed her own jewelry. Lot 593, likely a personal gift from Rogers, is stylistically similar to a silver and moonstone necklace with matching cuffs designed by Rogers, on display at the Millicent Rogers Museum in Taos, New Mexico.

In 1934, Verdura left Chanel, where he was working as head designer of her jewelry, and traveled to the United States with Baron Nicolas de Gunzburg and Princess Paley. His celebrated Maltese cross and caged motifs, expressed in gold and a rich color palette of precious and semi-precious stones, are featured in lots 597-600.

The collection is further enriched by exceptionally fine examples from Cartier, Boivin and whimsical ornaments from Princess Paley's travels abroad. Several pieces from the collection will also be sold in the December 9, Fine Jewels sale.

Upon her death in 1981, the jewels on offer were passed to John C. Wilson’s niece, a portion of which was sold by Sotheby's in 2009. Sotheby's is once again honored to present a selection of jewels from this important family collection.