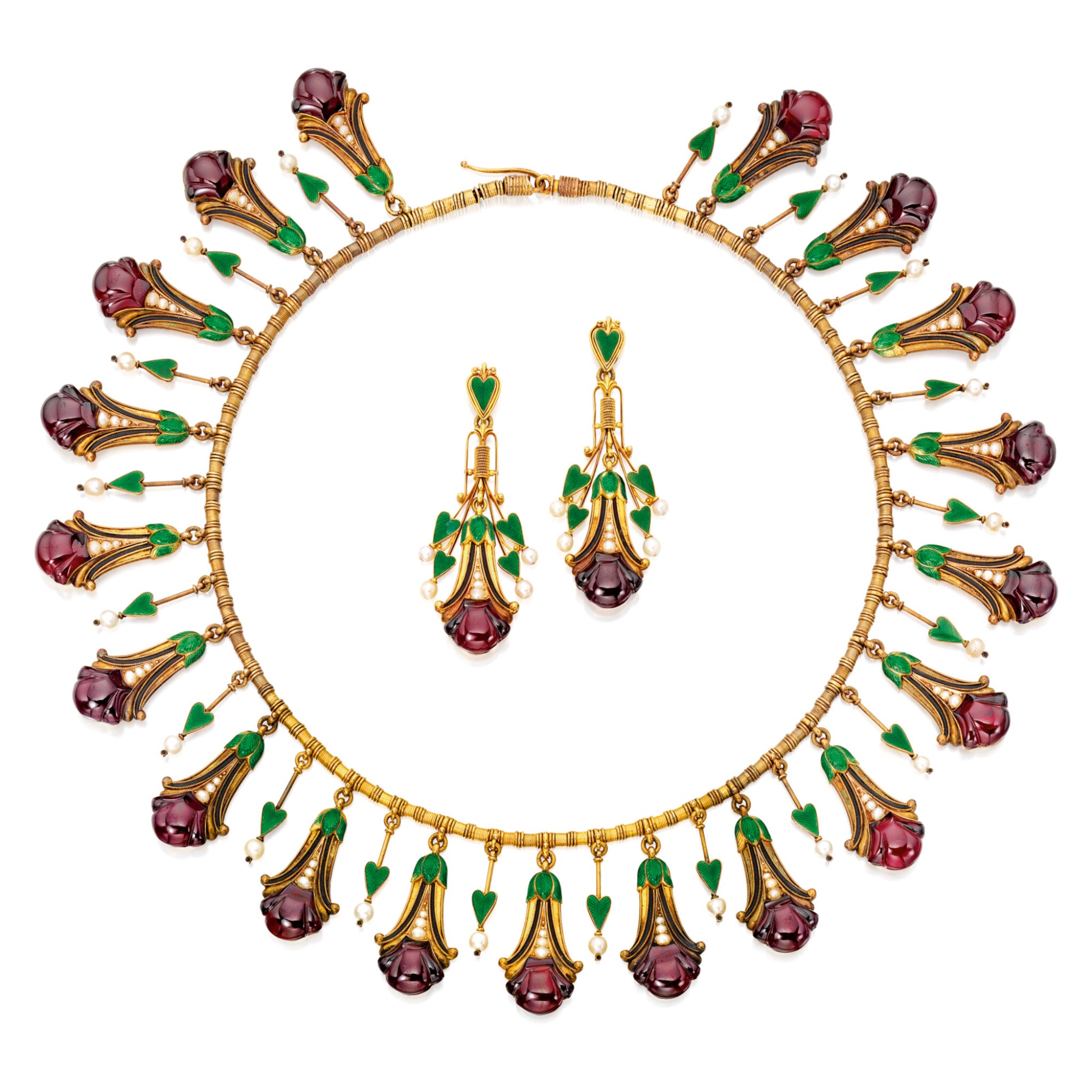 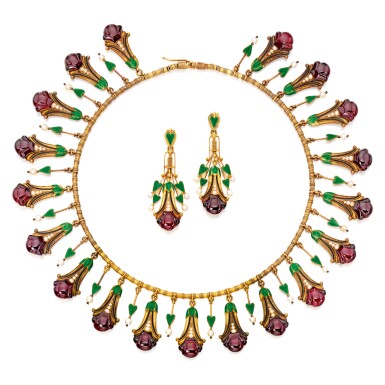 The necklace composed of a fringe set with 19 bud-shaped garnets, accented with seed pearls and applied with black and green enamel, signed C.G; together with a pair of matching earrings, unsigned, fitted with later added posts; circa 1870. With fitted Wartski case.

In very good condition given the age of these pieces, with minor tarnish to the gold mountings predominantly to the reverse sides. Mountings test as 18 karat gold. The garnets measuring approximately 13.0 x 11.0 mm (depth not measurable due to mounting), are deep red, slightly included. The seed pearls, measuring from approximately 4.0 x 3.6 mm to 1.3 x 1.3 mm, are of white body color, with soft rose overtones, with good to fair skin and luster. The translucent green enamel in overall good condition, intact on the heart-shaped pendant-motifs, and with some areas of loss on the foliate surmounts, above garnets. The black enamel in good condition, with no apparent loss. The earrings with later added posts and butterfly backings. The floral garnet pendants each measuring approximately 1¼ inches.

Property From the Collection of Dr. Susan Weber

Dr. Susan Weber has inhabited many roles: published author, film producer, curator, educator, advisor and philanthropist. To many, however, she is the patron saint of Decorative Arts. With years of experience and education to guide her, she founded the Bard Graduate Center for Studies in the Decorative Arts, Design and Culture in New York. The Bard Graduate Center is one of the few institutions in the United States offering an advanced degree in the decorative arts, and since opening doors in 1991, it has significantly elevated the profile and understanding of objects. The BGC is guided by the principle that objects, more so than the fine arts, serve to document people’s lives; they are not simply things of beauty, but artifacts.

When asked about her collecting philosophy by the New York Times, Dr. Weber said “I don’t collect, I have things I love.” More than two decades later, Sotheby’s posed the same question, and received a similar answer:

I have been collecting jewelry since I was a teenager. For the most part I purchased English revival pieces until the world of Castellani and Giuliano was brought to my attention by Geoffrey Munn at Wartski of London. Collecting jewelry was a way to learn more about these historic creations and I purchased many fine items from dealers, auction houses, and dealers. I only bought pieces that were highly wearable, aesthetically pleasing, and in excellent condition. Over the past twenty-five years I have had the pleasure of working on and hosting a series of jewelry exhibitions at the Bard Graduate Center including “Castellani and Italian Archaeological Jewelry.” The works I have decided to sell have given me much pleasure over the years and I hope that they will bring their new owners the same enjoyment.