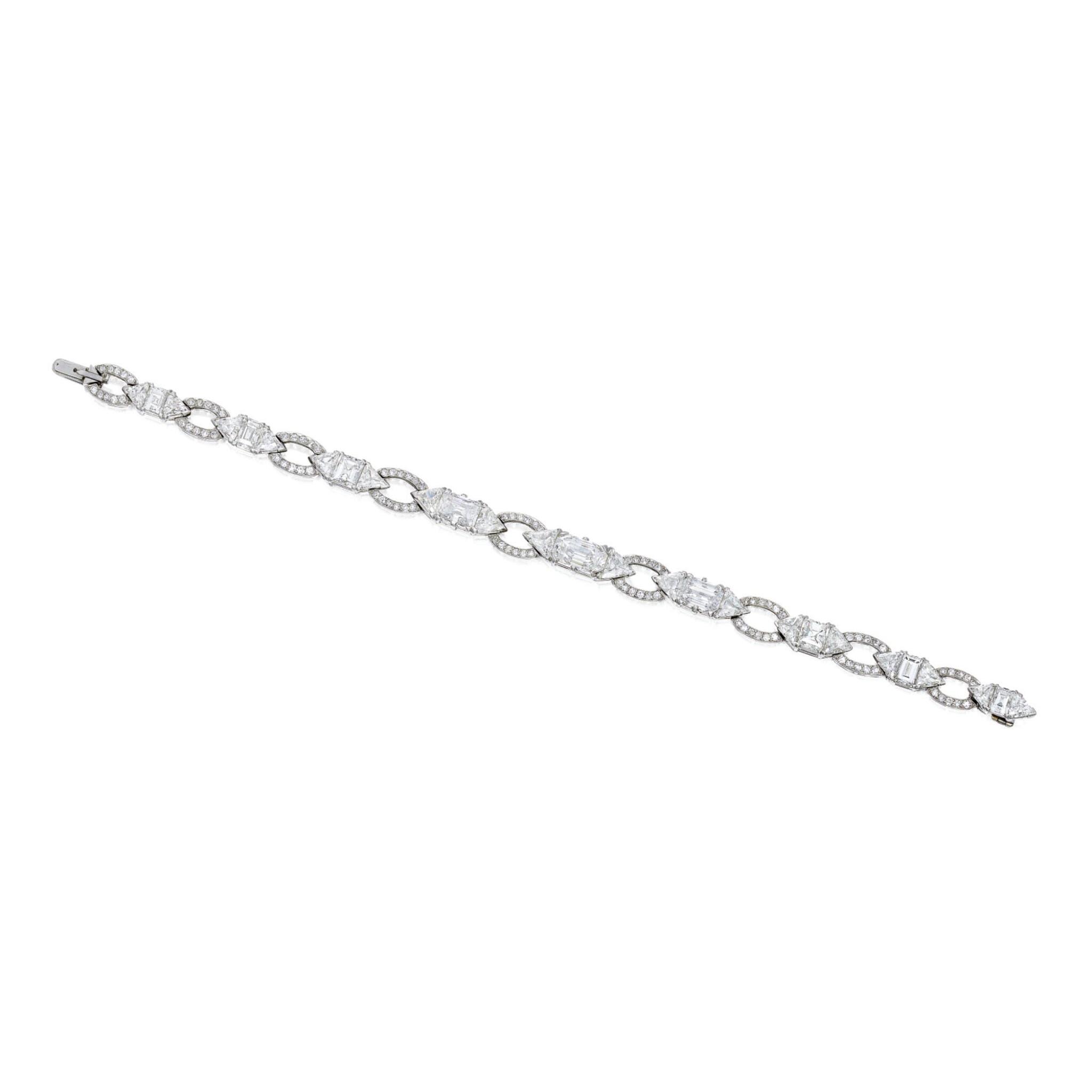 In very good condition given the age of the bracelet, with minor surface scratches to the mounting commensurate with age and light wear. Mounting tests as platinum. The tongue partially numbered 209. The gallery beside the tongue indistinctly numbered 2210 or 7710. The diamonds are estimated to weigh a total of approximately 13.50 carats, including the center most emerald-cut diamond weighing approximately 1.95 carats. The diamonds are predominantly approximately G-H color and VS-SI clarity, with several I clarity triangle-shaped diamonds. Clasp is fitted with a safety closure and closes securely.

Maude Monell Vetlesen (1877-1958) was a distinguished member of a prominent MidAtlantic family. Throughout a life filled with world travels, she amassed a significant collection of Chinese jade objects from the Ming and Ching Dynasties, now on display at the Smithsonian. The bracelet offered here is an elegant manifestation of Maud’s love for expertly crafted objects and jewels.

In 1899, Maude married Ambrose Monell, one of Andrew Carnegie’s “Bright Men,” who would become the President and Chairman of International Nickel Company, Ltd, and a distinguished colonial in the aviation unit of the American Army during WWI. An accomplished metallurgist, Ambrose is best known for the metal, monel, which bears his name; he was also an esteemed businessman and financier. Ambrose passed away in 1921, but Maude was committed to keeping his legacy alive and in 1956, she established a foundation in her late husband’s name, dedicated to contributing to scientific, cultural, education and other charitable initiatives.

﻿In 1932, Maude married Oslo-born Georg Unger Vetlesen, a naval architect and mechanical engineer. On the heels of WWII, the Vetlesens became deeply involved in the establishment of a Canadian training site for the Norwegian resistance and the rebuilding of the Norwegian Air Force after the country’s occupation by Germany in 1940. G. Unger Vetlesen later became the founder and chairman of the board of Scandinavian Airlines System, Inc., which began transatlantic operations in 1946.