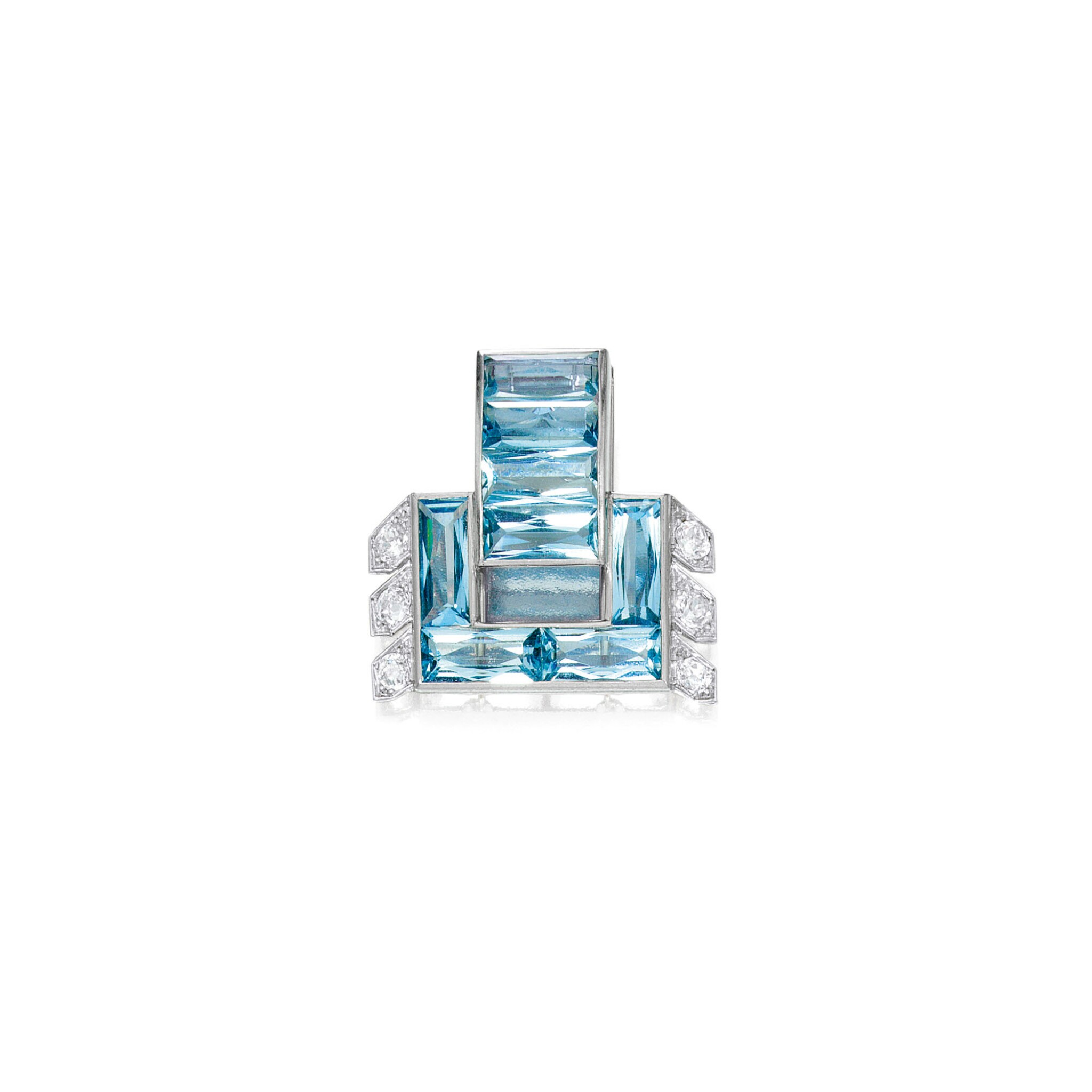 In good condition, with light wear to the mounting, commensurate with age. Mounting tests as platinum. The aquamarines are medium light slightly greenish blue color, eye-clean with light abrasions to the facets. The diamonds weighing a total of approximately 0.70 carat are approximately H-I color, VS-SI clarity. Length approximately 1 inch.

The charmed life of Mary Duncan Sanford can truly be seen as an American Dream, spanning every decade of the 20th century.

Born in 1895, Mary took to the Broadway stage as a teenager and appeared in numerous shows before entering Cornell University. Her college career was short-lived, however, when, after only one year, Mary headed West to study acting and pursue a career in film. Mary’s first act defines old Hollywood glamour, as she played first in silent films and later “talkies”, sharing screen time with movie stars like Marion Davies and Katharine Hepburn. Beautiful and stylish, Mary Duncan typified the 1930s screen siren, usually photographed in gorgeous gowns and fabulous jewels.

It was Davies who would introduce Mary Duncan to the love of her life, international polo player Stephen “Laddie” Sanford. They were married in 1933 whereupon Mary retired from acting. Mary’s second act as wife, philanthropist, hostess and socialite took her to the polo fields and ballrooms of Palm Beach where she remained for the rest of her life. Mary reigned over Palm Beach with grace and style, entertaining in her fabulous home, Los Incas, where the guest list included such luminaries as Rose Kennedy, CZ Guest, the Duke and Duchess of Windsor, Estée Lauder and Doris Duke. Mary also chaired many charity galas and events, most notably the “Polo Ball” which she founded to support Cancer research. Her beautiful collection of jewels reflected her glamorous beginnings and perfectly suited her real-life role of society grande dame.

Active and fit throughout her life, Mary shared her husband’s passion for sports and participated alongside him always, rather than simply attending as a spectator. Whether equestrian sports, golf, daily swims, deep-sea fishing or African safaris, Mary rode shoulder to shoulder with Laddie in every way. In 1963, David Field ended his article on Mary for The Palm Beacher with this: “Is Mary Sanford a socialite?...A dowager?...A philanthropist?...A twist dancer?...A horsewoman?...A wife?...A golfer?...An art patron?... Answer: she’s all of these. That’s why she’s Mary Sanford.”

The present collection is being offered across our Fine and Magnificent Jewels sales on December 9th and 10th.