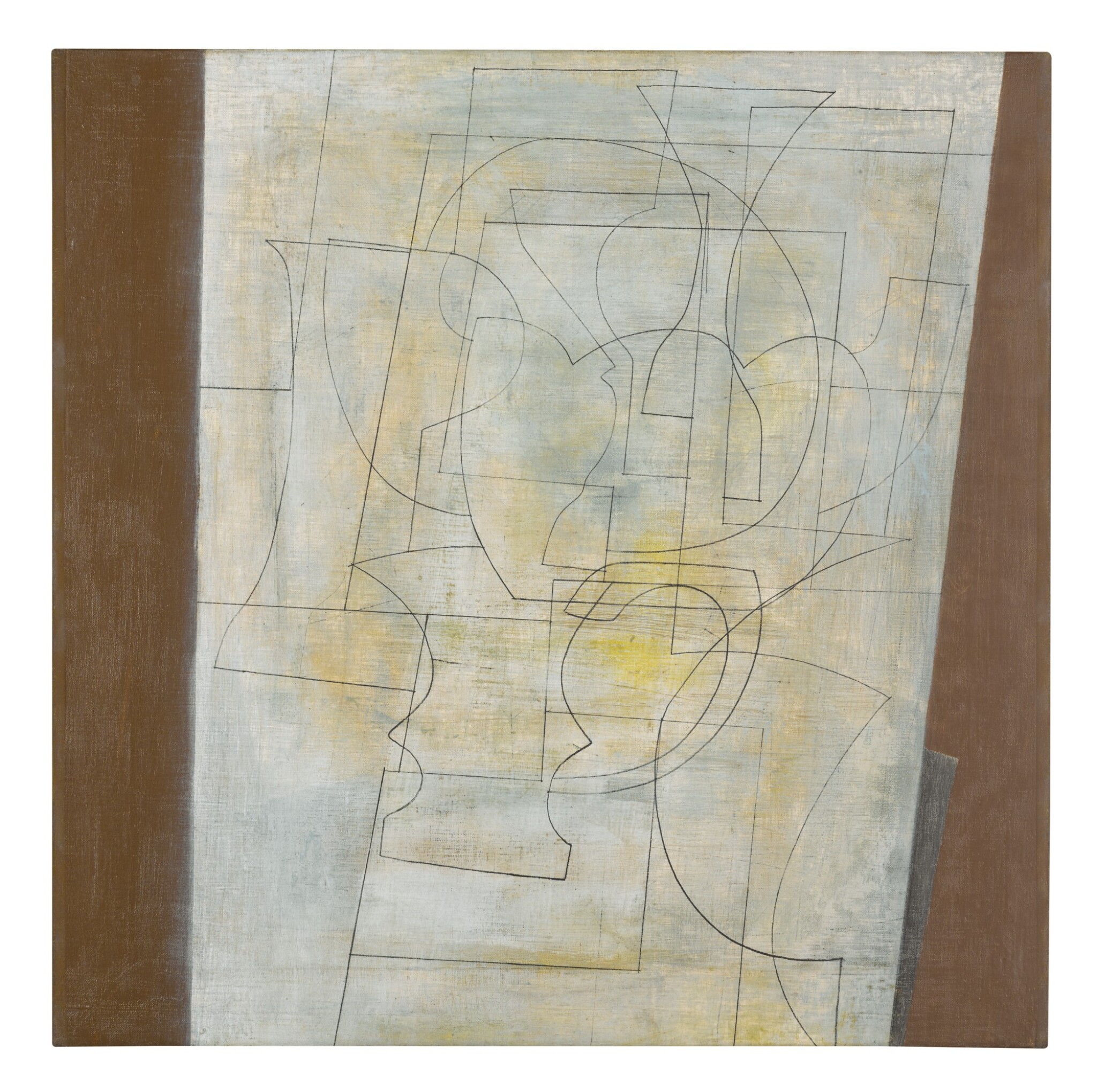 signed and titled on the canvas overlap

The canvas appears original. There is very light frame abrasion to the extreme edges in a few places. There are a few small isolated areas of very fine craquelure to the centre of the composition, only visible upon very close inspection. There are a few small specks of studio detritus to the work. This excepting, the work appears in very good overall condition.

Inspection under ultraviolet light reveals small spots of retouching along the edges, possibly replacing losses from previous frame abrasion, as well as an area of retouching towards the upper edge of the canvas at the centre. These have all been very sensitively executed. There are other areas of fluorescence, but these appear in keeping with the Artist's working methods.

The work is held within a painted wood box frame under perspex.

The Artist, by whom gifted to Dartington Hall, Devon, 1963

Acquired from the above by Waddington Galleries, London

Offer Waterman, London, from whom acquired by the present owner

We are grateful to Dr Lee Beard for his kind assistance with the cataloguing of the present work.

During the 1930s, Nicholson had built up an important network of connections within the European avant-garde, particularly in Paris, and the isolation of the war years saw a move in his work away from the pure abstraction he had been pursuing towards a style influenced heavily by the landscape. However, after the end of the Second World War, his style became increasingly abstract once more, this time working within a deconstructed still-life idiom. May 1955 (green chisel) dates from this extraordinarily innovative period for the artist.

Norbert Lynton describes these still-lifes and their relation to the works that had come before: ‘It is striking that in many of the major paintings of the early to mid-1950s, BN's still life has to exist without the partnering landscape he had accustomed us to… Our attention is sought first by the play of lines that represent the still life, secondly by the supporting planes that were the table, and only thirdly by the wider setting and its implications of space and location. Each element has surrendered the major part of what made it recognizable, and thus these still life compositions strike one as abstract, though their mode of abstraction is utterly different from that of the white reliefs’ (Norbert Lynton, Ben Nicholson, Phaidon, London, 1993, p.252).

May 1955 (green chisel) focuses directly on the table top objects themselves; the goblet, carafe and jug each delineated in Nicholson's trademark style. Although it was painted in 1955, the present work is highly reminiscent of Nicholson's style that he developed in the 1920s when he had first married Winifred and when they travelled together in Europe and experienced the French avant-garde at first hand. The stylised lines and interlocking forms of the still life in May 1955 (green chisel) clearly allude to the cubist influences that Nicholson discovered in the first decade of the 20th Century.

The distinctive surface of May 1955 (green chisel) is also significant. The underlying ground is clearly visible beneath the multi-layered paint surface and, as such, draws attention to the physical nature of the canvas itself. Winifred highlighted that it was Christopher Wood who introduced her and Ben to this technique of 'painting on coverine...it dries fast, you can put it over old pics' (Winifred Nicholson, Kit, unpublished memoir, Tate Gallery Archive 723.100, p.25). It created a firm painting ground that was visible beneath the painted image. In the present work, the paint surface takes on an additional three dimensional quality as the bold pencil drawing literally incises the surface almost punctuating the canvas itself.

A pioneer of abstraction, Ben Nicholson was undoubtedly considered one of Britain’s pre-eminent artists by 1955 when May 1955 (green chisel) was painted, and he received recognition on a global stage in these years: Nicholson won first prize at the Carnegie International, Pittsburgh in 1952, was selected to represent Britain at the Venice Biennale in 1954, and had his first high profile retrospective at the Tate, London in the summer of 1955.