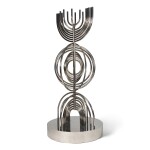 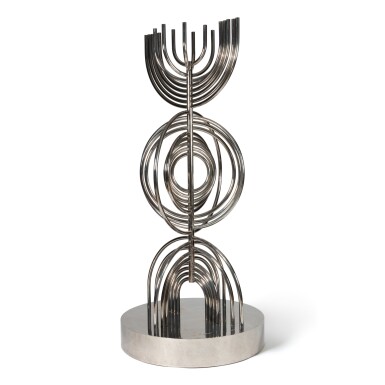 Surface is in overall very good condition; scattered minor abrasions inherent to age, with some minor oxidation where feet meet base.

Acquired directly from the artist, 1987

Thence by descent to the present owners

"One way or another, Agam belongs to the optic-kinetic school, and is one of its founders, as far as its new appearance goes. This artistic trend does not always emphasize the antagonism between man and machine, Sometimes it tries to co-exist with mechanical, industrial, and contemporary culture, and presents itself not as an opponent but as a means of appeasement, as an element of humanization in this generation of robots, and electrical computers. It can soften the impact of our epoch's amazing scientific discoveries.

Agam's creation is therefore an important contribution to this. He not only associates the element of time, but also, simply, the spectator. He makes it possible for the spectator to intervene directly in the kinetic dynamic aspect of the work. He opens a gateway to concrete participation between the spectator and the creator and from this point of view Agam's art is, as it were, a democratic art 'par excellence'. because every man can feel himself as part of the space of Agam's creation as an equal to the creator. And in this is hidden the social-human importance of Agam: he confers on each one of us a wonderful feeling of equality. He forces the man in the street to feel his own value as a thinking being, active and causative, as is suitable for everything created in the image of God, worthy of His name..." (Dr. Haim Gamzu in Yaacov Agam, Marlborough-Gerson Gallery Inc. New York, 1966, exhibition catalogue, p. 5).