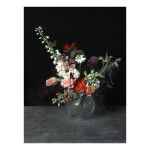 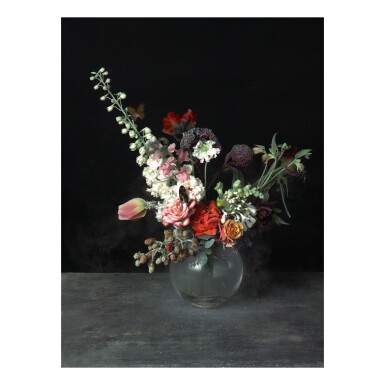 This work is in good working condition with original equipment, easy install. The plugs are UK plugs; an adapter is not included with the work.

Please note that this work was commissioned by the Victoria & Albert Museum for Twilight Exhibition in 2006 and was later exhibited at: The Santa Monica Museum, 2011; The Museum of Fine Art Boston, 2012; The Seduction by Art Exhibition National Gallery London, 2012; The Hirshhorn Museum Washington, 2013; The Gunter Grass House, 2019

In Big Bang (2006), Gersht plays with classic conventions of art history by evoking an eighteenth-century Dutch still life through the hyper-realistic lens of slow-motion digital video. The viewer is presented with what appears initially to be a lush, sensuous painting of a bouquet of flowers, the illusion of which is heightened by the artist’s framing of the video monitor. However, the perfectly still image soon gives way to a cataclysmic explosion scored to an operatic climax of sirens, which fills the space of the screen with fragments of glass, petals, and stems, which cascade slowly to the floor. Here, a still-life image is dynamically transformed into a kind of animated Abstract Expressionist composition. Alluding to both the creation of the universe and the concept of vanitas—which signals the inevitability of death and the transience of earthly things—traditionally associated with still-life, Gersht’s looping video stands as a spectacular meditation on the infinite cycle of creation and destruction." (for a link, please see the online catalogue entry for this lot).

Born in 1967, Gersht lives and works in London. Beside participating in numerous international group exhibitions, the artist has also held several solo exhibitions in distinguished galleries and museums including the Hirshhorn Museum and Sculpture Garden, Washington, D.C. (2009); Tel Aviv Museum (2012 and 2015); Museum of Fine Arts, Boston (2012); Center for Contemporary Art, Tel Aviv (2013); Columbus Museum of Art, Columbus, Ohio (2014); and Museum Kurhaus Kleve, Germany (2015). This work was originally commissioned by the Victoria & Albert Museum for their 2006 exhibition Twilight: Photography in the Magic Hour.