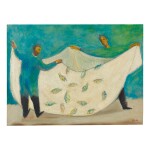 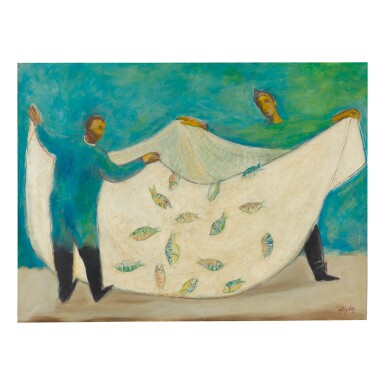 Professor Hemi Gutman has kindly confirmed the authenticity of this work.

Overall this work is in good condition. There are some areas where paint has risen by the lower edge and slight of craquelure by the bottom of the right edge. No retouching is apparent when viewed under UV light.

Nachum Gutman, born in 1898 in what was part of the Russian empire, immigrated with his family at the age of seven to Eretz Israel, where he was able to make a name for himself as an acclaimed artist, illustrator and writer. Landing in Jaffa and years of living in Neve Zedek where his family settled, provided Gutman with ample subject matter for his charming paintings of his new, exotic surroundings.

In the present work, there is a seamless combination of the naïve style Gutman developed – much influenced by his art studies at Bezalel and in Europe, with a certain reverence towards Rousseau and Dufy – and his personal immigrant experience, documenting the daily life in the people who live and work the land in his new home. Gutman depicts here the Matisse-like dance of two fishermen with their large net of translucent fish against the turquoise blue of the Mediterranean sky. Gutman painted many such works, creating a broad swath of characters from farm girls in orchards, carriage drivers in Jaffa or even watermelon merchants such as the another work by the artist offered in this sale (see lot 36), all capturing a fascinating snapshot of the middle-eastern ambiance of the time.