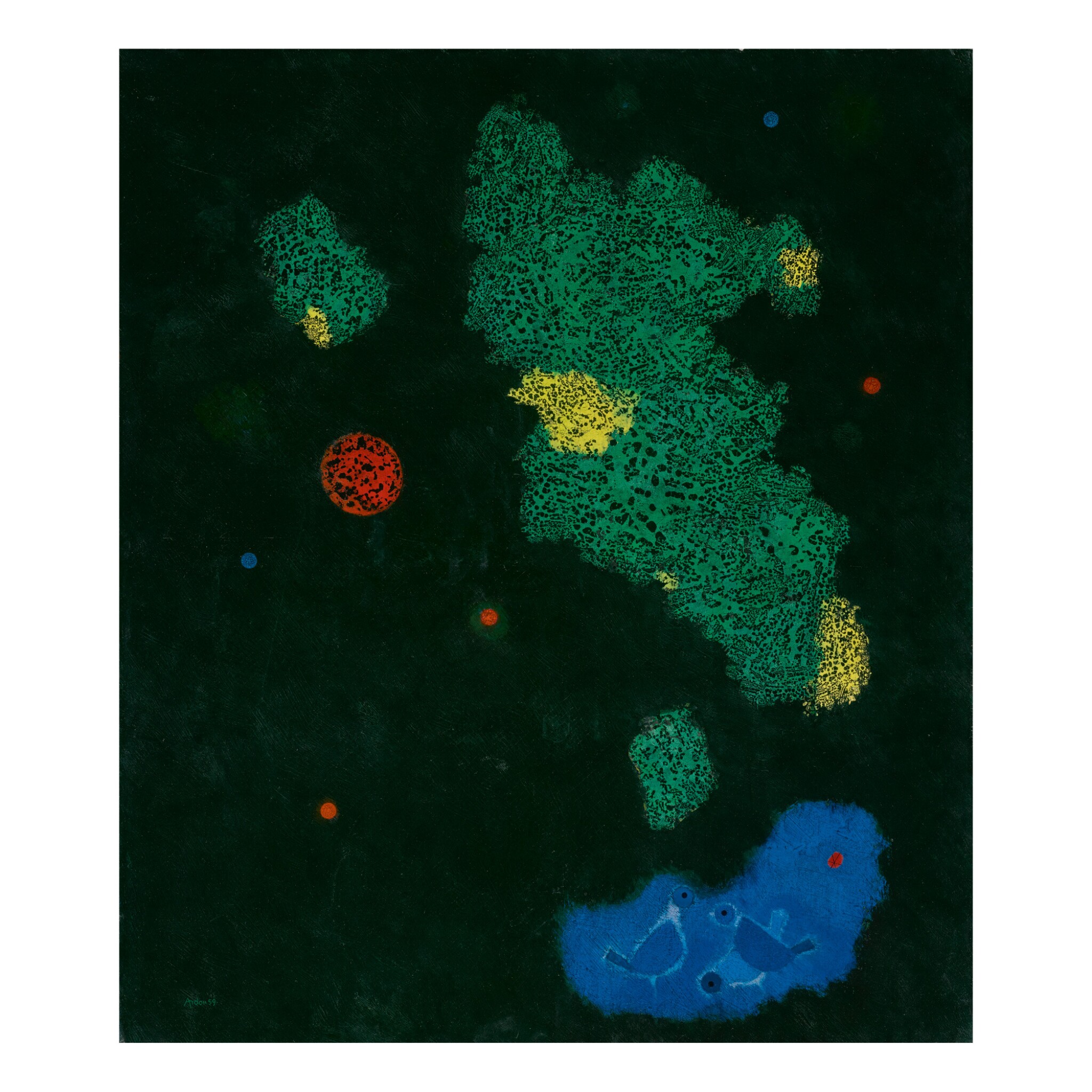 In very good condition. There is scattered craquelure. Some small areas of retouching are apparent under UV light. On the back, one small 2 inch professionally repaired tear is visible which corresponds to one of the small areas of retouching apparent under ultra violet light. This was expertly done by reweaving the canvas and there is no patch on the back.

Please note that this work is signed and inscribed on the back: signed Ardon, signed in Hebrew, titled Les Oiseaux Bleus, titled in Hebrew and dated1959 (on the stretcher). 0, not long after it was painted.

Tel Aviv Museum of Art, Ardon A Retrospective, May 1985, no. 53, illustrated in color in the exhibition catalogue

Born in Poland in 1896, Ardon studied at the Bauhaus, Weimer under Itten, Klee, Kandinsky and Feininger. In 1926 he studied painting techniques in Munich under Prof. Max Doerner and between 1929-1933 he taught at the Kunstschule Itten in Berlin before immigrating to Palestine. When the New Bezalel School of Arts and Crafts opened in Jerusalem in 1935, Ardon joined its faculty and after 5 years became its director, continuing to paint while influencing a new generation of artists in Israel.

The Blue Birds is an important example of Ardon's strong affinity with Klee, an influence which is evident throughout the artist’s oeuvre. Influenced by his teacher's need to depict the unseen, the secret and the mystical, in Israel Ardon became inspired by the Kabbalah and his readings of the Zohar. Various Kabbalistic elements and diagrams were used as important themes in his paintings expressing the artist’s need to reunite the stories and symbols of the past with the land of Israel in the present.

After being introduced to the medieval Birds' Head Haggadah at the Bezalel Museum in Jerusalem in which human figures are depicted with birds' heads, Ardon added birds as an important motif to his works in addition to Kabbalistic signs, symbols and metaphors. Referring to this development Ardon notes that: “he remembered the legends that all beings appear as birds, except angels who appear as humans.” (Ziva Amishai-Maisels, “Where Past Meets Present: The Art of Ardon” in Ardon – A Retrospective, Tel Aviv Museum of Art, 1985). Thus, the flock of three blue birds depicted at the lower right of the painting offered here may be interpreted as a flock of disciples, replacing the Kabbalistic motif of burning candles seen in other works from this period. Michele Vishny refers to Ardon's birds as birds which "are gathered for worship, symbolizing the Kabbalists whose custom it was to go out to the fields to pray.” (Michele Vishny, Mordechai Ardon, New York, 1973, p. 39). Arturo Schwartz also discussed the importance of this motif and notes: “Birds are almost universally considered as symbolic of the soul and are deemed to be the expression of the power of life. According to Jung, birds often represent angels who grant supernatural aid as well as being symbols of thought and flight of imagination. Finally night birds, … represent the positive powers of the Feminine principle.” (Arturo Schwartz, “Biblical and Esoteric Reminiscences” in Mordechai Ardon: The Colors of Time, Jerusalem and Tel Aviv, 2003, p. 55).

The artist's Chassidic background which taught of the importance of light - a hidden light which needs to unite with heavenly light and spiritual light - was another important source for his search to depict the mystical and unite the past and present. "In his painting Ardon seeks to reveal the hidden light of his colors: 'If colors are very flat, they are without interest to me.’ Color must be precious, must contain an inner fire, like the precious stones he recalls his father handling." (Michele Vishny, Mordechai Ardon, New York, 1973, p. 39). This luminescent use of colors is central in this painting in which areas of red, yellow and green float like jewels and constellations against a dark sky, while the three birds are encompassed in a luminous blue, all giving the picture an otherworldly aura. Ardon confronted the task of capturing the nocturnal atmosphere and impregnating it with metaphysical and mystical meaning. "Ardon gives pictorial form to dawn and twilight, to the nocturnal, shadowy and lunar. Through his use of colour and abstract forms he suggests a higher, more mysterious order of nature than the eye perceives. It is the image of the sky which concerns him... the feeling of a clear night, a vast cosmic creation, which is evoked by the pictorial construction itself" (Avram Kampf, Chagall to Kitaj, Jewish Experience in the 20th Century, London, 1990, p. 154).