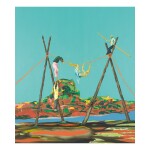 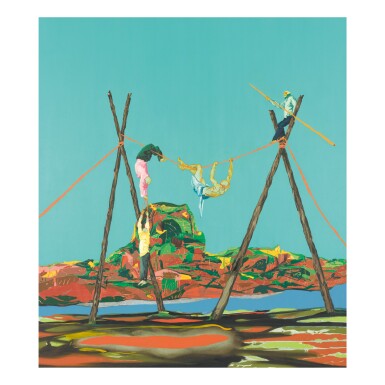 signed Matan Ben-Tolila, signed in Hebrew, titled Acrobats, titled in Hebrew and dated 2014 (on the reverse and again on the overlap of the canvas)

Please note, there is updated provenance available in the online catalogue entry for this lot.

Donated to Artis by Chami and Lazar Fruchter

Born in Israel in 1978, Ben-Tolila has been awarded the 2014 schir residency@berlin Grant, the 2006 Bezalel Academy of Art and Design Excellence in Painting Award and was the recipient of the America-Israel Cultural Foundation Award in 2005, 2006 and 2007. The artist has exhibited in in solo and group exhibitions in Israel and abroad including recently the Notes to the Wind, Art- Beijing 14 Art-Fair, China. His large scale landscape paintings focus on moments in which reality and abstraction co-exist, depicting temporary structures constructed with simple, almost schematic elements.

Artis is an independent nonprofit organization based in New York and Tel Aviv, founded in 2004, whose mission is to broaden international awareness and understanding of contemporary visual art from Israel. Artis connects artists, art professionals, and the public through programs that emphasize sustained support and meaningful opportunities for visual artists from Israel living anywhere in the world. These efforts include career development programs and collaborations with 448 institutions through cultural seminars, public programs and exhibition grants.