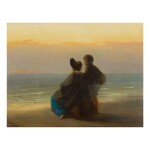 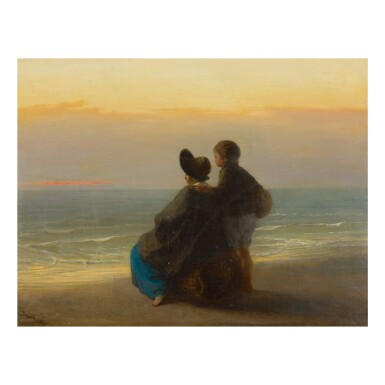 JOZEF ISRAËLS | MOTHER AND CHILD LOOKING OUT TO SEA

JOZEF ISRAËLS | MOTHER AND CHILD LOOKING OUT TO SEA

MOTHER AND CHILD LOOKING OUT TO SEA

This work is relined. There is thin craquelure and some scratches scattered throughout, one small hole on the top center of the work, approximately nine cm. above the woman's hat and one thin, one cm., line of paint loss in the lower center (on the edge of the woman's coat) of the painting. There is a glazing on the surface of the work.

Although the subject matter of this painting is typical of his later and more widely known work, the style is entirely consistent with Israëls' manner in the 1860s.

During his lifetime, Jozef Israëls was the most celebrated Dutch painter of the 19th century, not only within the Hague school in Holland, but also abroad, in Britain, Germany, Italy and North America. His artistic training began in the Académie Minerva in Groningen where he was born and in 1845 he traveled to Paris where he studied in the École des Beaux Arts. Although early in his career he was an aspiring history painter, Israëls chose instead to devote his energies to genre and portraiture and received acclaim for his scenes based on the lives of the Scheveningen fishing communities.

In this painting a mother and her child are looking out to the sea, while the sun sets in the distance, probably waiting for her husband to return safely from his day's work.