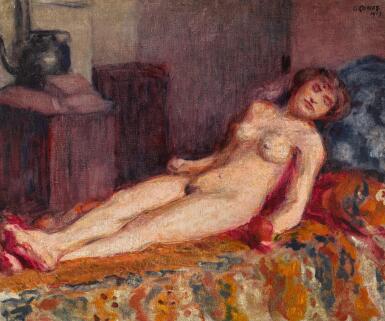 Property from the Collection of Brian P. Burns

Property from the Collection of Brian P. Burns

PROPERTY FROM THE COLLECTION OF BRIAN P. BURNS

The canvas is lined, providing a secure and stable structural support. The work appears in good overall condition.

Ultraviolet light reveals retouching predominantly to the model and some to the chaise longue.

Held in a gilt plaster frame, ready to hang.

Oriel Gallery, Dublin, where purchased by Brian P. Burns in 1997

O’Conor lavished a great deal of care over the painting of this nude, in terms both of its fidelity to the studio setting with its stove in the background supporting a large kettle, as well as in the way it has been painted. Whilst the foreground drapes have been represented using broken brushwork and a fauvist range of bright colours, the figure and the space behind her have been rendered for the most part with more muted tones that have been applied using blended brushstrokes. The young model, her head supported by bolsters and drapes piled up against the back of a chaise longue, has clearly fallen asleep. In her left hand she appears to hold a bright red apple, as if to symbolise the temptation and fall of Eve.

At this stage in his career O’Conor tended to avoid introducing literary elements into his paintings. It is possible, however, that the addition of an apple here was an act of homage to Paul Gauguin, the painter whose “strength of character and convincing style of talk made a deep impression on the young, or youngish Irishman” (Clive Bell, Old Friends, 1988, 166). Following their decisive encounter in Brittany in 1894, O’Conor may well have been shown Gauguin’s painting Exotic Eve dating from 1890/1894, depicting a naked Eve who has just plucked an apple from the Tree of Knowledge (Pola Museum of Art, Japan). The comparison begs the question as to whether O’Conor may have conceived his nude as a twentieth-century Parisian Eve, cosseted by luxurious draperies and at several removes from nature.