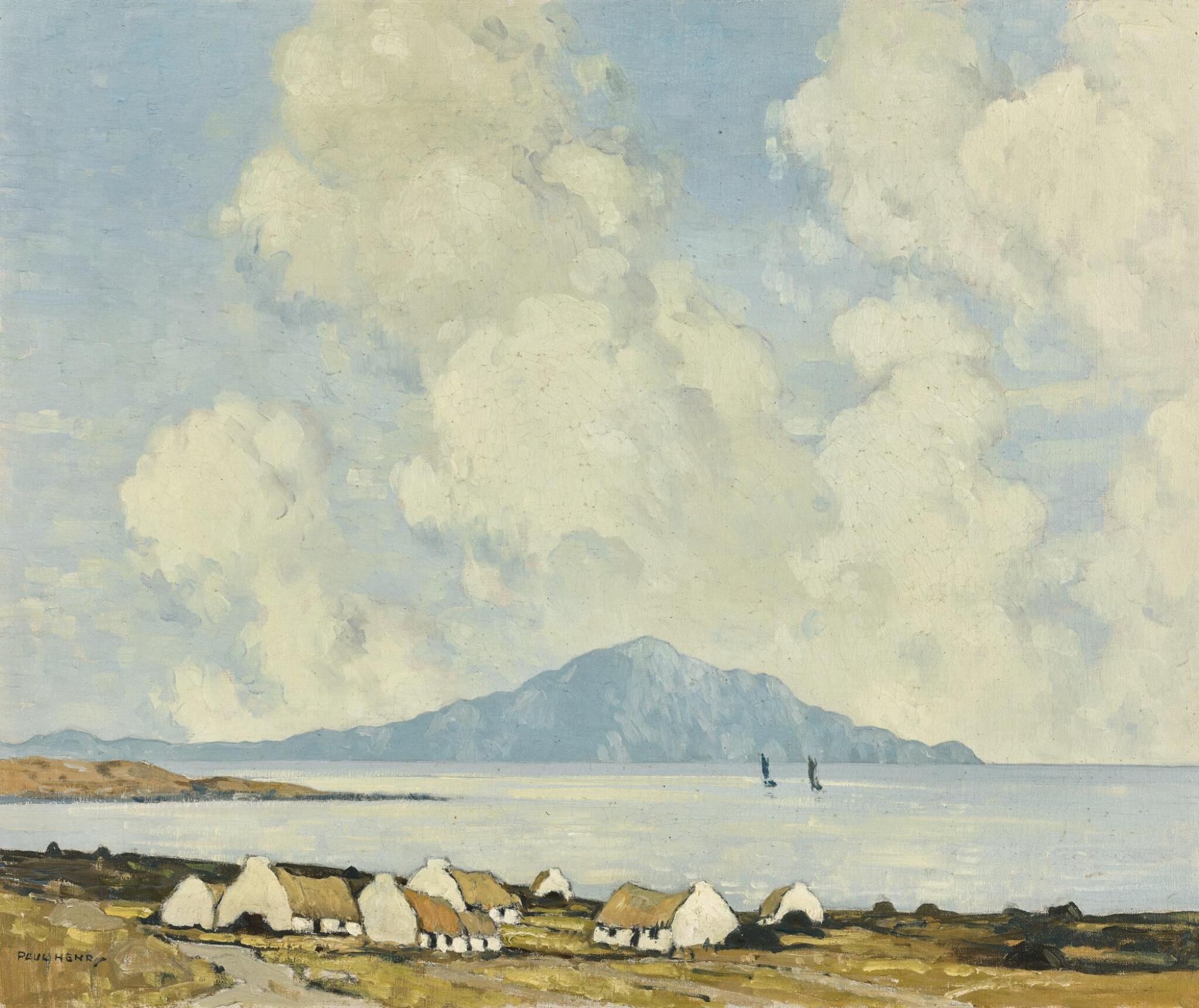 The canvas is lined providing a secure support. There are some very faint traces of craquelure visible in the clouds and sea which are stable. Overall the work appears in good condition.

Ultraviolet light reveals some minor isolated spots of retouching in the sky, mountains and sea.

Held in a Dutch-style ebony frame.

Geoffrey Thomas Taylour, 4th Marquis of Headfort and thence by descent to the present owner

Paul Henry’s decision to spend a fortnight’s holiday in summer 1910 on the rugged Island of Achill was a momentous one. Spontaneously tearing up his return ticket and solemnly declaring his virgin arrival a ‘homecoming’ (Paul Henry, An Irish Portrait, London, 1951, p. 2), the painter would settle there for the next decade – enchanted by island and islander alike – and later return to visit throughout his life. Surrounded on three sides by the Atlantic Ocean, Achill’s splendid prospects and severe, sempiternal rhythms of life afforded Henry inspiration for innumerable subject pictures and landscapes, many of which would come to be seen as some of the defining works of his career.

Warily christened with the nickname ‘Sketcher’ by Achill’s inhabitants (S.B. Kennedy, Paul Henry, Yale University Press, 2007, p. 33), Henry would rove the island in search of scenes to paint. Among the numerous Achill landscapes he produced, the present work is one of several examples looking south towards nearby Clare Island. The artist’s subtle modelling of the distant cliffs of Knockmore, the highest point of Clare rising to a height of 462 metres in the centre of the composition, and gentle bluish tones – rockface resonating sea and sky – almost give the impression of the faraway island hovering over the horizon. Beneath, the fine little silhouettes of a pair of fishing boats slip over the surface of a composed sea; above, buoyant cumulus clouds, rendered with a sensitivity characteristic of Henry, joyfully tower and billow.

Henry’s evocative light and painterly approach can be attributed to some extent to a short, yet formative period spent in Paris at the turn of the century. Immersing himself in the city’s buzzing, artistic atmosphere, Henry had attended first the Académie Julian then worked for a time in the studio of Whistler, assimilating the older artist’s principles of harmonious arrangements, restrained palette, considered brushwork and ‘art for art’s sake.’ On arriving on the west coast of Ireland, Henry put his Parisian education into practice, seeing the landscape with a wholly modern eye and forging an avant-garde style that was at once distinctly Irish.

In the words of Dr S.B. Kennedy, ‘Almost single-handedly Paul Henry defined a view of the Irish landscape, in particular that of the West, that remains as convincing to modern eyes as it was in his own time. Like Constable’s Suffolk and Cézanne’s Provence, once experienced it is difficult to see the landscape of the west other than through Henry’s eyes' (S.B. Kennedy, Paul Henry, National Gallery of Ireland exh. Cat. 2003, p.5).

This superb example emerges in the public eye for the first time in nearly a century. It was purchased by Geoffrey Thomas Taylour, 4th Marquess of Headfort and his wife, Rose. Rose was a celebrated 'Gaiety Girl' at the Gaiety Theatre in London, and Geoffrey Taylour's marriage to her in 1901 caused a scandal. They took refuge at the family's estate at Kells in Co. Meath (which today is Headfort School), where as Marchioness, Rose proved herself a skilled and popular figure in the managing of estate affairs and addressing the concerns of the Headfort tenants. William Orpen visited Headfort in 1914 and painted a spectacular portrait of Rose (sold in these rooms 10 May 2012, lot 136).