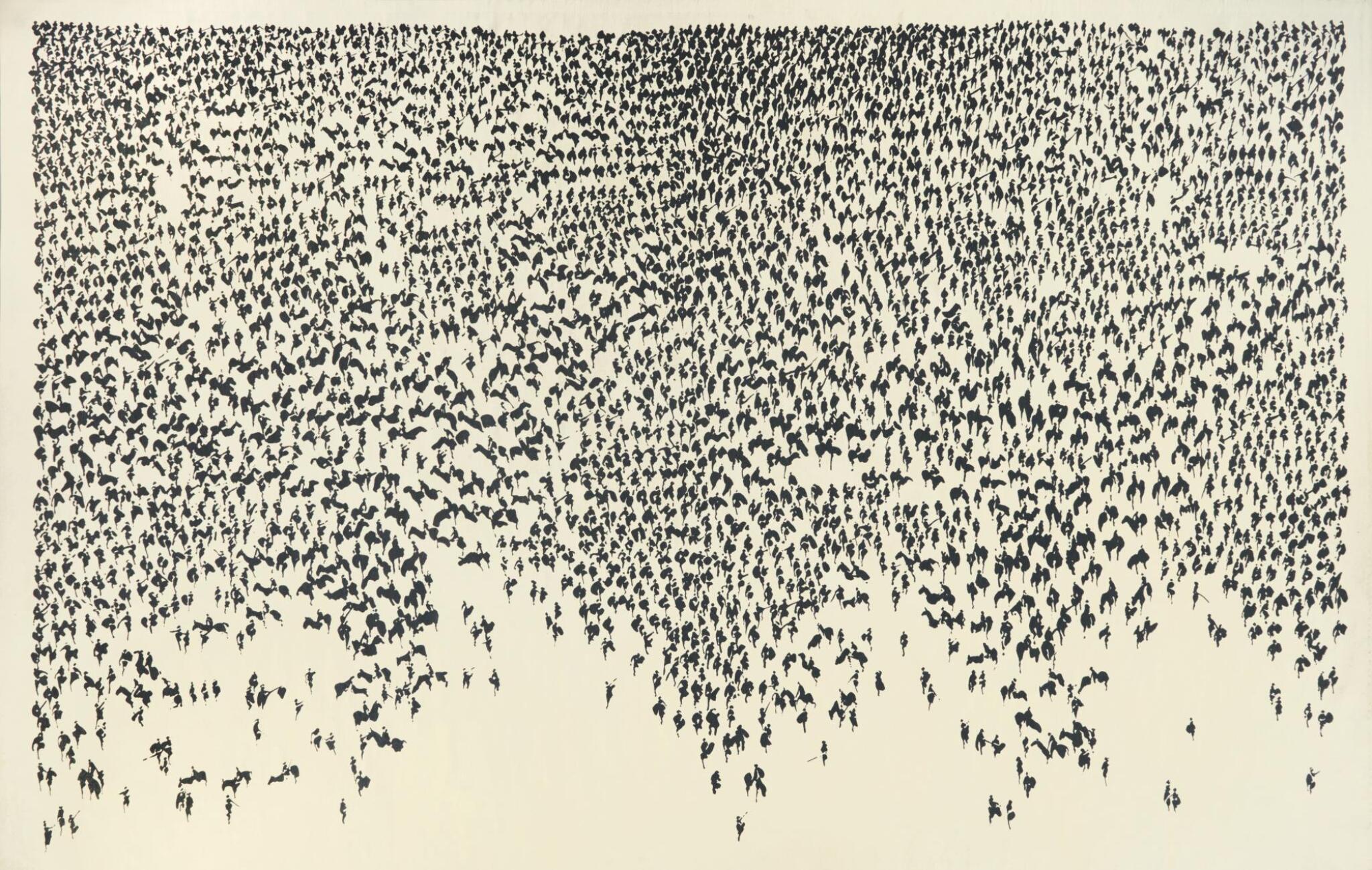 THE MASSING OF THE ARMIES

In near mint condition with a Velcro strip to reverse of upper edge for hanging, with Tapisserie D'Aubusson label to reverse of lower right corner.

Commissioned from the artist in 2000 for RTÉ Television Programmes Building, Dublin

The Massing of the Armies has its genesis in le Brocquy's commission in 1969 to provide illustrations for Thomas Kinsella's translation of the Irish epic, Táin Bó Cúailnge. For an artist as sensitive and assiduous as Louis le Brocquy, it represented an enthralling challenge. How to create a fitting visual tribute to a translation that was itself a resolution to a tangled mess of three fragmentary medieval manuscripts, all drawing from ninth century transcriptions of far older oral traditions and faded memories? In an ‘Artist’s Note’ to the original Dolmen edition, le Brocquy wrote, ‘any graphic accompaniment to a story which owes its existence to the memory and concern of a people over some twelve hundred years, should decently be as impersonal as possible.’ The goal, he observed, was to ‘express not personality but temperament’ (Louis le Brocquy, 'Artist's Note', The Táin (Mountrath, Co. Laois: Dolmen IX, The Dolmen Press 1969), colophon). Employing his famous ‘blot’ technique’ on an awesome scale, The Massing of the Armies is a striking demonstration of this principle, capturing the epic’s sweeping energy without distracting detail or sterile descriptive precision.

Le Brocquy’s tapestry records the episode from the epic when the formidable Queen Medb of Connacht gathers her troops to head eastwards and carry off the legendry stud Donn Cuailnge – the ‘Brown Bull of Cooley’ – from neighbouring Ulster. At some thirty square metres, Le Brocquy’s monumental rendition of the Connacht raiding party overwhelms the viewer with its shifting mass of warriors and horsemen against a white background. Originally produced as a lithographic design in 1969, the tapestry was woven in the historical region of Aubusson by the expert Lissiers and award-winning studio, the Atelier René Duché, Meilleur Ouvrier de France. Though le Brocquy had begun translating his cartoons into tapestries in 1998, selecting twenty cartoons from the original publication, the present work is unique as a Millennium project for a public building – inverted from an edition within the original twenty.

Looking closer at the tapestry, one is struck by the restless fluidity of the figures. Le Brocquy himself emphasised the immediacy of these brushstroke bodies, stressing that ‘Gesture had to be spontaneous. I also saw it as a way of avoiding commenting directly, describing. I was intent on not describing’ (Interview between Louis le Brocquy and Yvonne Scott, 28th April, 2006). Although limited to two colours, the careful blending of cotton and wool threads and the mixture of bleached, unbleached and natural white fibres, contrasted by black and grey ones, enables an extraordinary range of gradation and subtlety. Combined with the textured cutting of threads, the result is a nuanced ‘marbled’ effect, a technique mastered by only a few weavers at Aubusson. With typically eloquent modesty, le Brocquy refers to the result as ‘shadows thrown by the text’. Shadows though they may be, le Brocquy’s tapestries exude an uncanny, tangible power in their evocation of a mythico-legendary world.